'This is a good way of telling the story to a new generation,' says member of Cherry Hill parish 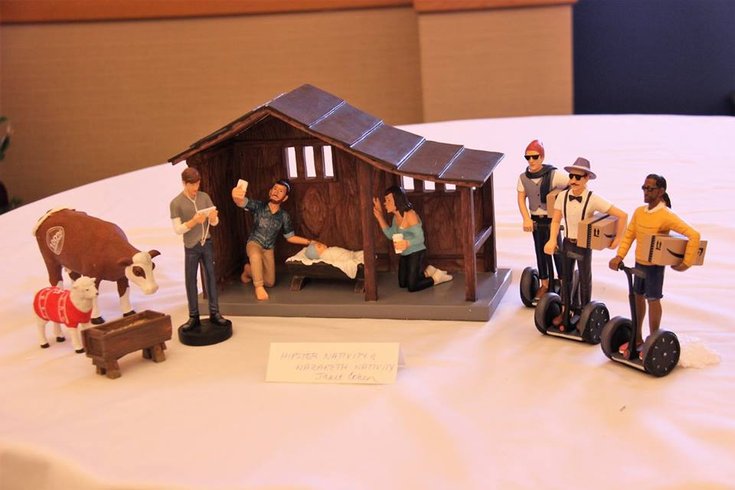 The hipster nativity scene on display at Trinity Presbyterian Church in Cherry Hill.

Were man buns at the birth of Christ?

Doubtful, but a nativity scene on display at Trinity Presbyterian Church in Cherry Hill, New Jersey, gives a look at what it would look like if Jesus was born in the era of selfies and Segways.

The nativity scene is one of several on display at the church, contributed by different members of the Trinity community. Along with traditional manger scenes, as well as an expansive Lego nativity collection, the ‘hipster’ Christmas scene shows Mary holding a to-go coffee cup, a sheep in an ironically ugly Christmas sweater, and three wise men rolling in on Segways, their gifts still boxed in Amazon packaging. Joseph is snapping a selfie of his new family as another figure is plugged into his iPad.

The alternative nativity scene is the product of online novelty retailer Gorilla Goodies, designed by brothers Corey and Casey Wright. According to CNN, the alternative scene is nearly sold out of its 5,000 supply. The set has garnered a mix of reactions online.

Looks like a normal day on Main Street Manayunk

A novelty shop is selling a hipster nativity scene that features Joseph with his hair in a man bun. Which explains why Mary was so adamant about remaining a virgin.

We saw the hipster nativity scene. It made me chuckle, but at the same time, I really hope this isn’t how history remembers us! pic.twitter.com/kZjAgJLBSb

A real thing: The hipster nativity set.
I think it's a tad sacrilegious. Literally, is nothing sacred anymore? pic.twitter.com/pN9mBFOpQf

“If you’ve ever wondered what the very first family Christmas photo looked like, wonder no longer,” the product description reads. “Fresh off a Whole Foods shopping spree, Joseph is rocking his man bun and finest denim shirt, while Mary shows off her high cheekbones with her best duck face.”

Of the manger, the description reads, “It may not be the Ritz Carlton, but that doesn’t mean it doesn’t have some cool amenities. Actually, all it has is a solar powered roof, but at least they’re helping to solve global warming.”

According to CBS3, Trinity members Janet and Steve Cohen brought in the manger to contribute to the church’s various sets on display.

“This is a good way of telling the story to a new generation,” one parishioner said to CBS3.

Another church outside St. Louis, Missouri, also had the hipster nativity scene featured with around 60 other scenes on display. Though some members of the community found it inappropriate, Monsignor John Myler from the Cathedral of St. Peter in Belleville said it belonged with the others, all of which were displayed to help people interpret and reimagine the first Christmas from culture to culture.

Check out the full hipster set at Gorilla Goodies.