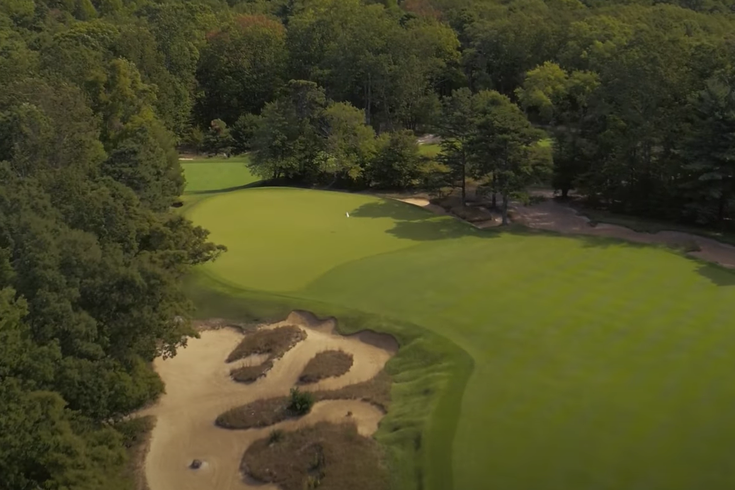 Pine Valley Golf Club has been ranked No. 1 in the country by Golf Digest all but four times since 1985.

Pine Valley Golf Club has been rated the best golf course in the United States for a third straight time in Golf Digest's updated rankings of America's 100 Greatest Golf Courses, released on Tuesday.

The South Jersey golf course has been ranked No. 1 in the country all but four times since 1985 by the media outlet in its biennial list of the best tracks in the country.

The publication's rankings system, which began in 1966, takes into account seven categories when rating courses. Panelists are tasked with evaluating a course's shot options, layout, challenges, distinctiveness, aesthetics, conditioning and character. Enjoyment level is also factored in, but not graded numerically.

A course's final score is an average of the seven categories, with shot options counting for double.

The private golf club, located in Clementon, earned the highest score with a 72.1. It was rated the best in terms of shot options, course layout and challenges; second in conditioning and character; third in distinctiveness; and fourth in aesthetics.

"Pine Valley's reputation as the hardest and best golf course in the world is well-earned," one panelist wrote.

Pine Valley was founded in 1913 by Philly native George Crump. The course opened in 1918 with the purpose of serving as a place where the region's best male golfers could compete and practice.

Despite its prestigious standing, the course has not hosted any major championships, PGA or LPGA Tour events or international competitions.

Pine Valley leadership voted last week to allow female members and unrestricted women's play for the first time ever in the club's history. The club has been exclusive to men since its founding, and women guests have only been permitted to use the course on Sunday afternoons.

Merion Golf Club's East Course took the No. 6 spot for a second straight time with an overall score of 67.6. The private club in Ardmore earned its highest rating in the character category at sixth with an 8.8.

Merion is second only in this year's rankings to Oakmont Country Club as the best in Pennsylvania. The frequent U.S. Open host came in one spot ahead at No. 5.

The golf club's East Course, which opened in 1912, has reached as high as No. 5 on three different occasions.

Merion has hosted five U.S. Open championships, including most recently in 2013. It also has the West Course, which opened two years after its more highly-rated counterpart.

Below is the top 10 courses in the U.S., according to Golf Digest.

Aronimink Golf Club in Newtown Square was rated as the 94th best golf course in the U.S., falling from No. 85 on the 2019-20 rankings. It earned an overall score of 61.2, with its highest mark coming in the character category at 7.8.

"Breathtaking golf experience in my opinion," one panelist wrote.

The private golf club, which opened in 1896, has reached as high as No. 49 on the biennial rankings.

The Philadelphia Cricket Club's Wissahickon Course at the private establishment's Flourtown location came in at 110th with an overall score of 60.7, dropping from its most-recent standing at 104th. It was scored highest for its conditioning, earning a 7.7.

"The aesthetics were gorgeous, and the ambiance was spectacular," one panelist wrote.

The Philadelphia Cricket Club began operations in 1854. The Wissahickon Course opened in 1922.

Galloway National Golf Club in South Jersey dropped from 127th to 131st in this year's rankings. The private golf club in Galloway Township earned an overall score of 60.1, with its highest mark coming in the challenges category at 7.6.

"Certainly among the very best at the Jersey Shore," one panelist wrote.