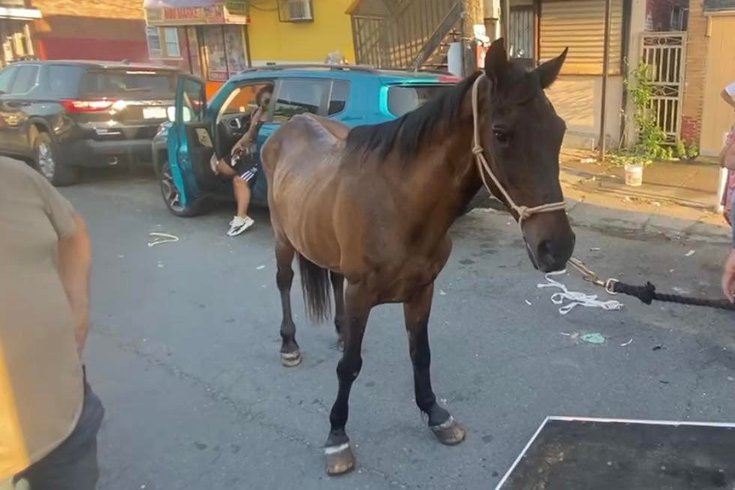 A horse that was abandoned in Hunting Park on Monday was kept out of harm's way by residents until ACCT Philly and the Pennsylvania SPCA could bring it to a safe place. The horse was named Darien because it was found on the 4000 block of Darian Street.

Large farm animals wandering the streets aren't a common sight in Hunting Park, but this didn't stop residents from stepping up to help a horse who was abandoned in the neighborhood Monday.

The steed, now named Darien because he was found on the 4000 block of North Darien Street, was abandoned by someone who bought him earlier in the day.

The person who briefly owned Darien decided to not bring him home because the horse didn't have shoes on his back hooves, 6ABC reports. He was on the street for about 3 1/2 hours.

Hunting Park residents cared for the horse by keeping him cool and out of danger until the Animal Care and Control Team of Philadelphia arrived to pick up Darien.

Then, he was loaded onto a trailer and brought to a stable belonging to the Pennsylvania Society for the Prevention of Cruelty to Animals.

Stray horse found roaming streets of Philadelphia tonight. He was found & safely rounded up by caring residents in Hunting Park. ⁦@ACCTPhilly⁩ to the rescue. He was stubborn at first&didn’t wanna get in the trailer to take him to temp care&home ⁦@FOX29philly⁩ pic.twitter.com/Dsq2DPTbLc

"Darien is resting comfortably tonight, we are so thankful to the people who cared after seeing him abandoned," ACCT Philly tweeted. "He's very underweight and will need some extra (tender love and care)."

Darien 🐴 is resting comfortably tonight, we are so thankful to the people who cared after seeing him abandoned. He’s very underweight and will need some extra TLC, and we are reaching out to our rescue partners about him as a Philly is no place for a horse of course! pic.twitter.com/Xklf6uGSvL

The horse will not be up for adoption, because he will need additional medical care, ACCT Philly wrote in a Facebook post. The organization is currently looking for a rescue that can take Darien.

Though it's legal to own a horse in Philadelphia, ACCT Philly said it's challenging and expensive to care for a draft animal like that in the city.

But there are groups in the city that care for horses.

The Fletcher Street Urban Riding Club was founded in 2004 but the Black cowboys who make up the organization and their tradition of raising and riding horses in North Philadelphia goes back more than a century.

Today, the club's mission is to provide outdoor recreation and life skills to the neighborhood's kids through equestrian sports.

The group, which has stables in Strawberry Mansion, is featured in the Netflix movie "Concrete Cowboy," which came out last year.

That exposure helped the club raise more than $350,000 on GoFundMe to continue its operations amid the COVID-19 pandemic. Before the fundraiser was launched in June 2020, the club's founder Ellis Ferrell had been paying out of pocket to keep it up and running.