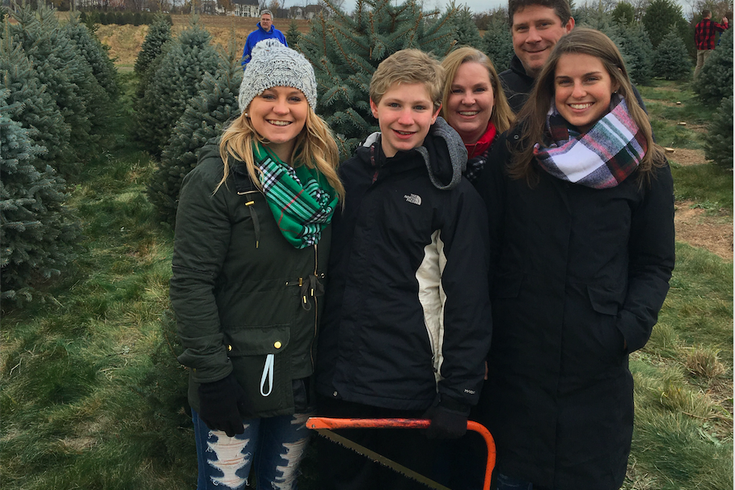 Ciejay Bond (middle, holding a saw) was struck by a car in front of his Montgomery County home in 2012. Few thought he would survive his injuries, but now he's able to head out and cut down a Christmas tree with his family.

The first of two parts

As he lay gravely injured in the street outside his family’s Montgomery County home, nobody thought Ciejay Andrew Bond would live to see his ninth birthday.

“That was true to character. He always tries to be helpful,” said his father, Mark, during a recent interview at the family’s Gilbertsville home before Ciejay arrived home from school. “He knew exactly where his boundaries were, what tree he wasn’t allowed to go beyond.”

Ciejay made it across New Hanover Square Road safely and knew to look both ways before crossing back but, thanks to being left-handed, his parents presume he looked right, left, right before waiting for a car to pass in the opposite lane.

Then, he stepped off the curb – directly into the path of a vehicle traveling between 40 to 55 miles per hour. That’s what doctors estimated based on the boy's injuries.

The driver said she saw Ciejay, but didn’t think he was going to move into the street, so she didn't brake. Her vehicle’s side-view mirror struck him in the head. The force threw him about 25 feet.

“I understand the impact took the mirror off the car,” said Mark.

The driver came to a stop at the next intersection, some 200 feet away. She would face no charges. The Bond family said that day was the last they heard from her.

“Someone came banging at the door and said that there was a little boy in the street,” recalled his mother, Christine. “I didn’t even know he was outside.”

She rushed out the front door, across the lawn and into the street.

“We got the standard ‘we don’t know’ responses. Then it was, ‘Don’t expect your son to ever be the same again if he lives at all.’ They prepared us for the worst.” – Mark Bond

“Everybody thought he was dead at the accident scene,” she said. “They were saying, ‘Don’t touch him,’ but I was in the Navy, so we have combat training. I knew to check him, to turn him on his side. He was bleeding from his ears and nose. He was groaning and moaning. He was pretty still. He was just flinching.”

The life he clung to in those early hours and days, despite all odds, would be forever changed.

The list of injuries that Ciejay’s parents detail at their dining room table more than four years later take up more than a page.

Basilar skull fracture. Complex fracture of the Petrous portion of the left temporal bone. Diffuse brain swelling. Left to right midline shift of 6mm. Left pulmonary contusion. Disruption to the extension of the mesotympanic cavity. Many, many more.

They didn’t know any of that on that Friday evening. They simply faced the prospect of having to bury one of their children.

The Bonds had no way of knowing then that Ciejay would fight for his life and survive the accident – a miracle, they say – only to set the stage for another fight, against a school district they contend doesn't really know how to educate students who’ve had traumatic brain injuries. 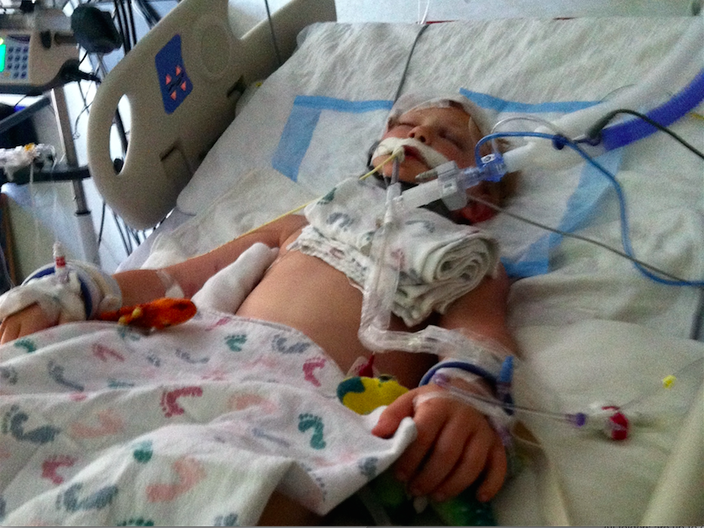 Ciejay Bond, in the hospital after being struck by a car in Gilbertsville, Montgomery County.

The Bonds have lived in their home, set back off the street about 45 feet, since 2008. They’re originally from the area, but moved to Nashville for a spell for Mark’s corporate job. Development in the area spurred growth and wider streets.

That summer afternoon in June 2012, Christine was changing her clothes after work, as Mark drove home from his job in Center City.

After Ciejay was struck, New Hanover police officers and medics arrived quickly. He would be airlifted from a nearby field to Lehigh Valley Hospital. Christine made that decision. A flight to Children’s Hospital of Philadelphia was longer, and every second would count, she reasoned. Lehigh Valley was just eight minutes away by air.

“If things got worse,” she said, “I didn’t want him caught in a flight pattern.”

Surgeons removed a portion of Ciejay’s skull to treat the bleeding and swelling. He spent the next week in a medically induced coma, on life support, in the pediatric intensive care unit.

A police officer sped her to the hospital in a car.

“I knew what they had to do, that he was going to be intubated,” she said, on why she didn’t get on the helicopter with her injured son. “I had already seen enough in the street. I didn’t want to watch them do that to him.”

Mark got a frantic call from his daughter Brittany minutes later.

“I didn’t understand what she was saying because she was screaming. I had to calm her down. When she told me, time stood still,” he recalled. “(Route) 422 on a Friday is usually a pain, but strangely enough, I was able to do 55, 60 all the way home. (Christine) had left with police by the time I got there, so we gathered a few things and went right to the hospital.”

He was immediately deemed a “neuro code red,” and a three on the Glasgow Coma Scale, which qualifies as a “severe” brain injury, the lowest score possible before brain death.

Surgeons removed a portion of Ciejay’s skull to treat the bleeding and swelling, and inserted a ventricular catheter to alleviate pressure on the brain and remove excess fluid. He spent the next week in a medically induced coma, on life support, in the pediatric intensive care unit.

“We got the standard ‘we don’t know’ responses” to questions about prognosis,” Mark said. “Then it was, ‘Don’t expect your son to ever be the same again, if he lives at all.’ They prepared us for the worst.”

Said Christine of every parent’s nightmare: "The worst part was when they sent up a chaplain. We’d never been through this kind of trauma before so we thought, ‘Oh my God, they’re going to tell us he died.’

The chaplain, it turned out, was just one facet of the support system at Lehigh Valley Hospital.

Those seven days felt like a year, but as time progressed, survival became more certain. Soon, his family would start learning about the brain injuries that would follow Ciejay for life. 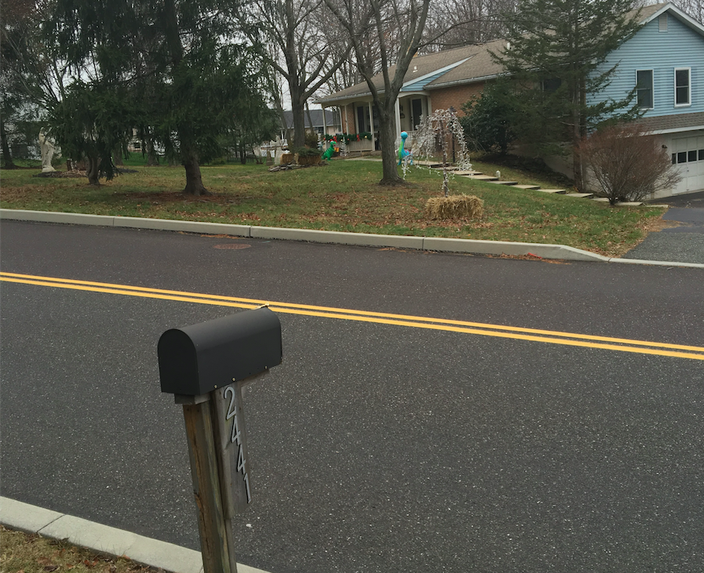 On the day he was struck by a car, Ciejay Bond walked across the street from his home to get the mail.

WAKING UP FROM THE COMA

At first, they couldn’t believe what they saw and heard.

When Ciejay awoke, seven days after nearly dying in the street, he remembered what landed him there. He also recalled some surreal stories from his previously comatose mind.

He told his parents that he saw the front corner panel of the car, but it was too late to move before it struck him.

He talked about an angel that took his brain to heaven where it met Jesus who “showed him his wounds and told him his mother couldn’t help him, either.”

“He was only eight at the time, so religion wasn’t something that he was clear about it,” said Christine. “We’re not fanatically religious; we have faith. But at that point, all you can do is pray.”

“We’re not fanatically religious; we have faith. But at that point, all you can do is pray.” – Christine Bond

Then, Ciejay started talking about dinosaurs, spurred by Christine reading “Mitzi and the Terrible Tyrannosaurus Rex” to him at his ICU bedside, his parents believe.

She thinks he somehow sensed that she brought a Blessed Mother statue to his hospital room the day before he emerged from the coma.

These recollections would not stay with Ciejay. The nature of his injuries turned his brain into the equivalent of a dry erase board. He wouldn’t remember things he’d said before. The slate was constantly being wiped clean.

After his skull flap was replaced during surgery more than a month later, he woke up giggling with another story. They asked him what was so funny about the procedure that enabled him to ditch the protective helmet he had been wearing for months.

“He said, ‘There’s Jesus and grandpa and a dinosaur and the dog,’” Christine shared.

That one was even more peculiar than the post-coma stories. Ciejay’s parents can’t remember him ever hearing the story of the small black dog, Inky, that Mark had in his youth.

“I never told him about the dog and, to the best of my knowledge, my mother never did either,” Mark laughed. “But here’s Ciejay saying he’s talking to my dad about the dog and how my one aunt had cats, which she did.”

CONCERNS FOR THE FUTURE

Eleven days after being struck, Ciejay was transferred to Good Shepherd Rehabilitation Pediatric Unit in Bethlehem, where he’d stay in the pediatric unit for another two weeks, before heading home, wearing that helmet to protect his skull.

He started an intensive, years-long schedule of outpatient occupational, physical and speech therapy. Therapy continues to this day.

It was a tough road back, and would have been for anyone – child or adult – who’d been through what Ciejay had that summer.

“Every single lobe in [Ciejay's] head was affected by the impact of the trauma.”

In many ways, the recovery is a miracle. When Ciejay came bounding though the door the day of the interview, he seemed like any teenager who wanted to play with his dog and show off the contraptions he’d built downstairs in his “Dinosaur Cave.”

He was excited to go to swimming practice in a couple hours, where the camaraderie serves as a much-needed escape from the controversy pitting his parents and school officials against one another, even as he realizes he may never be the same as other kids.

Christine and Mark worry what the future will hold.

When a young brain suffers a traumatic injury, it's difficult to determine the extent of its recovery.

Making matters worse, they don't believe he’s getting the support he needs at school to make that effective leap into his teenage and adult years. With each passing day, the chances of a fuller recovery dim. When that concern is raised, the Bonds' mood turns to anger and frustration.

“Every single lobe in his head was affected by the impact of the trauma,” his mother said. “What doctors say is, most of the time, if you sustain a brain injury later in life, you have more to draw from. Because Ciejay didn’t have that much to draw from, they didn’t expect him to be educated well. They just didn’t know because of the damage.”

Little did Christine and Mark know the extent of the wrangling that lie ahead with their son's future hanging in the balance.

Thursday: The Bonds take on a school district to ensure Ciejay gets assistive support and a quality education in the face of his challenges.