A 16-song soundtrack to the season 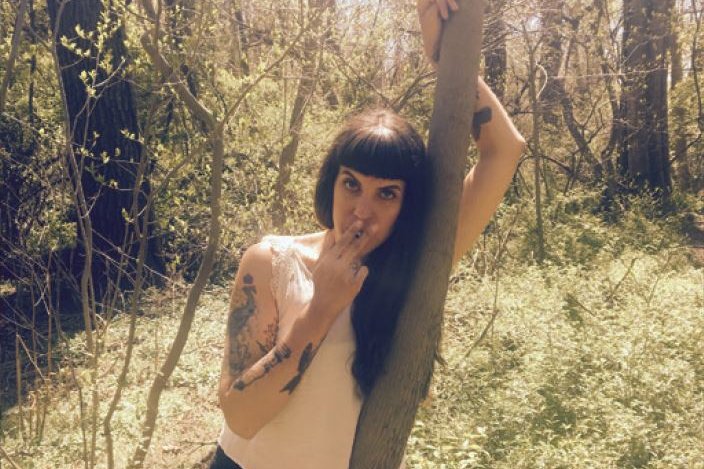 Swanning celebrates the release of "Drawing Down the Moon" at PhilaMOCA on Tuesday, May 31.

Read More
Summer is ready when you are. All you need is the right music to get you in the mood. Here are 16 tracks — all by local artists — to put your mind in the sunshine.
1. Birdie Busch & Jaron Olevsky — "Do It Like You Mean It"
Let's start with something pretty. Something smart and simple. This duet — featuring the pretty voices of Birdie Busch and Jaron Olevsky (keyboardist/organist in Amos Lee's group) certainly fits the bill. Olevsky wrote it, but it sounds like some classic country cover. Busch, an accomplished songwriter in her own right, will celebrate the release of her newest record, "Thunder Bridge" (from whence this song came), June 18 at Boot & Saddle.
2. Swanning — "Sleep My Pretties"
With strong guitars and sweet melodies, Cynthia Ann Schemmer's new band Swanning is definitely one to keep an eye on. The lyrics smile through fangs: "I am not as I seem, I'm gracefully pretending / Pardon me while I bloom out like a blast and into your bedroom." Swanning unleashed their debut EP, "Drawing Down the Moon," on Tuesday at PhilaMOCA.
3. Hardwork Movement — "Take Time"
Conscious, soul-searching hip-hop group Hardwork Movement is one of my favorite things going in Philly right now. "Take Time" — featuring some soothing, sorta spooky vocals by Dani — will move your head and feed your mind.
4. Nothing — "ACD (Abcessive Compulsive Disorder)"
A weird, dreamy rock song from this city's leading exporters of weird, dreamy rock. This one's from their latest record, "Tired of Tomorrow," released in May. It's also got a video.
5. Kashish — Glass
This track takes a second to wrap your head around, like Fiona Apple doing Portishead: trippy and buzzy, resilient and punchy. It's where the hero gets up, shakes off the dust and says the story ain't over.
6. RJD2 — "Peace of What"
RJD2 remains one of Philly's most unpredictable rock/pop/hip-hop/whatevs acts. On this track from his latest, "Dame Fortune," he teams up with Jordan Brown and comes up with something funky and soulful, like a TSOP track from an alternate past.
7. Little Strike — "Come Out Alright"
A song for sipping something strong and thinking about what might be (and how you're gonna get it). Spooky and passionate, Little Strike settles into that sweet spot between cool trip-hop & blood-hot R&B.
8. Queen of Jeans — "Rollerdyke"
Look, there are a lot of contenders out there, but if somebody wants to call Queen of Jeans the best indie band in Philadelphia right now, I'm not gonna argue. They released a self-titled EP in January and wrap up a residency at Bourbon & Branch on May 27. Get on board.
9. Sylk 130 feat. Ursula Rucker — "A Day in the Life"
When King Britt announced he was reviving his Sylk 130 collective/project, heads of a certain vintage nodded knowingly. Sylk was the legendary DJ's funkiest stuff, and 1998's "When the Funk Hits the Fan" remains a dancefloor classic. Britt — with help from Lady Alma, Ursula Rucker, Tim Motzer and tons more — will do that record and then some at the TLA on September 4. I couldn't find much embeddable Sylk 130 stuff, but this Illvibe remix (featuring hints of  Hall & Oates) does the trick.
10. Joie Kathos
A hip-hop beat to pump you up and some chill electronics to hold you steady.
11. Thin Lips — "Non-Monogamy Nightmare"
If you like fiery, bratty rock ’n’ roll, you need Thin Lips in your life. They just dropped the four-song "Divorce Year" and it's all killer, no filler.
12. Japanese Breakfast — "Rugged Country"
There's a lot of deeply personal stuff on "Psychopomp" (released in April), but that doesn't mean it's a snooze. Michelle Zauner can't not be catchy.
13. Mumblr — "VHS"
I dig this song; it's punky, jangly, goofy and paranoid all at once. You'll find it on "The Never Ending Get Down," which gets the release party treatment on June 11 at PhilaMOCA.
14. Mercury Girls — "Ariana"
Dreamy, woozy, guitar-forward indie pop like they used to make. It's hard to imagine a better fit for Mercury Girls than Slumberland Records. Buy the two-song EP and keep it flipping.
15. Vita and the Woolf — "Brett"
Scary synths with powderkeg vocals. This Brett guy might be in over his head.
16. Free Cake for Every Creature — "First Summer in a City"
If you dismiss Free Cake as just another adorable bedroom pop band, you be sneering while everybody else is having a good time. Their adorableness is formidable.