Team that ousted Taney from LLWS under investigation over player eligibility 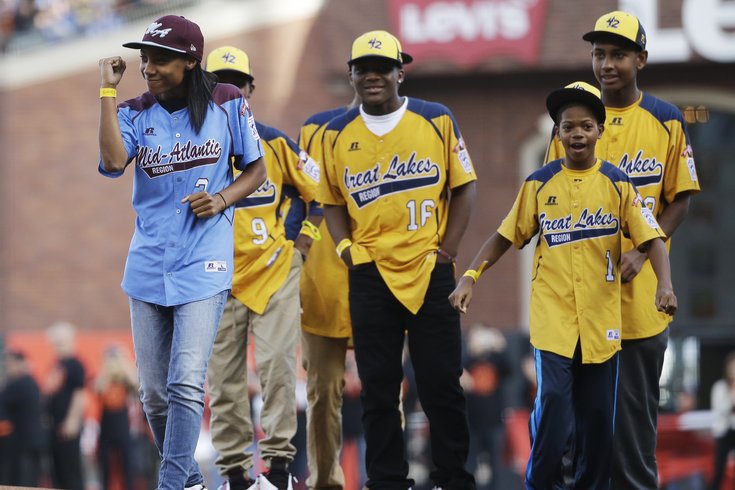 Mo’ne Davis accompanied by players from the Jackie Robison West Little League team before Game 4 of the World Series.

Spokesman Brian McClintock said the organization's charter committee was meeting to discuss "possible resolutions" regarding the Jackie Robinson West team and that a final decision would likely be made this week. He declined to say if the team might lose its title.

Late last year, the organization said it was confident that there were no violations of residency regulations after investigating allegations made by an official from a suburban Chicago league that some of Jackie Robinson West's players live in suburbs with already-established Little League teams. It said it would the investigation if necessary.

On Tuesday, McClintock said the organization had received "new information" that prompted further review of the allegations. He would not elaborate.

Jackie Robinson West officials did not immediately respond to an email for comment but league officials have denied the team violated any residency rules, and that none of the players was recruited. The allegations were first reported by DNAinfo.com.

In the U.S. semifinal game, Jackie Robinson West eliminated phenom Mo'ne Davis and the Taney Dragons Little League team from Philadelphia, 6-5, before beating the West team from Mountain Ridge Little League (Las Vegas), 7-5, to advance to the title game, where it ultimately lost to South Korea.

Mountain Ridge coach Ashton Cave said Jackie Robinson West should be stripped of its title if the team broke the rules.

"There has to be some accountability," he said.

Stripping a Little League champ of it's title is not unprecedented, specifically when it comes to the use of ineligible players.

In 1992, a team from the Philippines had to forfeit its title after the coach revealed that just six of his players were from the appropriate district and claimed that the others were added by government officials hoping to beat Taiwan in the international championship.

Then, more notably, there was the case of the 2001 team from the Bronx and star pitcher, Danny Almonte. It was later uncovered that Almonte was actually 14 years old while pitching in Williamsport and the team had its championship stripped.

In both cases, the title was given to the runner-up.

Cave, however, said that rather than award his Las Vegas team the U.S. championship, Little League International could send a more powerful and lasting message by simply leaving the space blank where the championship team is listed.

"I think if they do that, it will always be a message in the world of youth sports: If you bend the rules there is going to be a consequence," he said.

This past summer, the stirring run to the Little League World Series by all-black Jackie Robinson West captured national attention and united Chicago, which remains one of the nation's most segregated cities. The Cubs watched JRW play during a rain delay and cheered them on while Mayor Rahm Emanuel organized all-city watch parties. The Rev. Jesse Jackson said his Rainbow/PUSH Coalition would take the boys to Disney World.

After falling to South Korea in the world championship game, Jackie Robinson West was feted with a parade and a visit to the major league World Series and the White House, where they met President Barack Obama and first lady Michelle Obama.