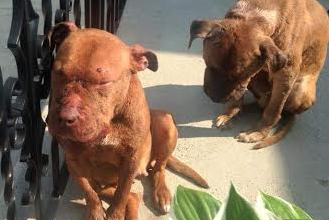 Two dogs that were found outside a Philadelphia home after being severely abused are now recovering at a New York animal rescue.

According to Examiner.com, a Philadelphia woman spotted the pair of dogs on her porch when she was leaving for work on Wednesday.

The dogs were visibly malnourished and suffering from broken bones, a posting read on the Save the Labs Facebook page.

That evening, the Animal Care and Control Team of Philadelphia (ACCT) evaluated the dogs, which were described as "mellow and calm although very frightened." The dogs were named Sweet Pea and Dizzy.

Rescue Dogs Rock NYC treated the dogs' injuries, which were consistent with dog fighting. Members at the facility believe the dogs were used as bait dogs for fighting dogs.

According to Rescue Dogs Rock NYC, the dogs are currently on intravenous fluids, antibiotics and pain medication at the facility.

A reward is being offered for information that leads to an arrest of anyone involved with the abuse.