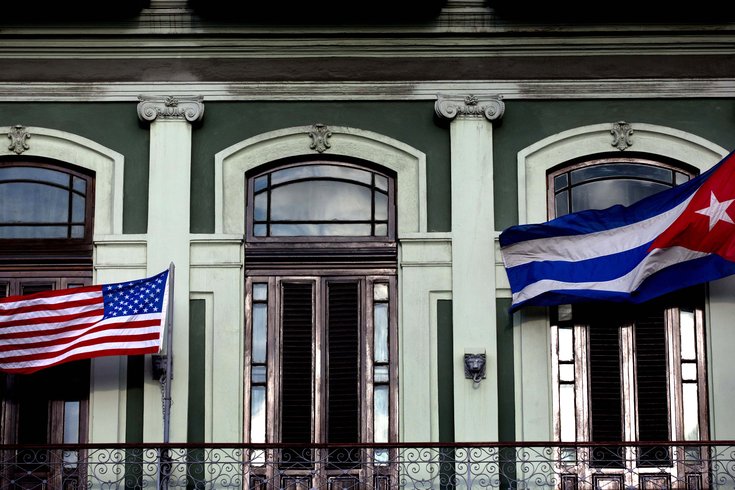 In this Jan. 19, 2015 file photo, a Cuban and US flag wave from the balcony of the Hotel Saratoga in Havana.

The Florida Bar is sending its first ever delegation of lawyers to Cuba this week to explore emerging new business opportunities as prospects heat up for closer political and commercial relations between the United States and the Communist-run island.

Some big law firms with Miami offices, often staffed by Cuban-American exiles, are already beefing up their Cuba-related practices in response to queries from U.S. companies on issues ranging from telecommunications to banking, amid signs the longstanding U.S. trade embargo on Cuba is eroding.

Pedro Freyre, a Cuban-born attorney who heads the international practice at Akerman, said his phones started ringing within minutes of the December announcement by U.S. President Barack Obama and Cuban President Raul Castro that they had agreed to reestablish diplomatic ties severed some 54 years ago, and to work toward normalizing relations.

"These are exciting times," said Freyre. "Our U.S. clients, some who are Fortune 100 companies, want to know can foreigners own land in Cuba ... what is the power and water supply like, what are the work force rules?"

Since the December agreement, the two countries have held several meetings on restoring diplomatic relations and opening embassies. After two days of talks in Washington, Cuba and the United States said on Friday they had made progress and would continue negotiations in the coming weeks.

The 37-strong delegation from the 100,000 member Florida Bar will spend three days in Cuba from Wednesday meeting with government officials and counterparts from the Cuban bar, among others, said Peter Quinter, chairman of the bar's international section.

Despite opposition among some Cuban-Americans in Miami to the rapprochement, the Florida Bar's planned trip was so popular that many members had to be turned away, he said.

"Things are definitely changing and we intend to help things change," said Quinter, a trade and customs lawyer with GrayRobinson, a corporate law firm with 12 offices in Florida.

"We are interested in doing business in Cuba, but without understanding the laws in Cuba, companies can't contract," he added.

A sweeping U.S. trade embargo remains in force, greatly limiting business in Cuba and banning tourist travel, and only the U.S. Congress can lift that.

Cuba's state-controlled system also tightly restricts activity by law firms. There are no foreign law firms in Cuba and private practice is not allowed, so all lawyers work for state-run entities.

Yet since the December announcement, the Obama administration has opened up greater commercial opportunities in areas such as telecommunications and banking services, as well as efforts to boost Cuba's small private sector.

One likely area for legal activity is the unresolved property claims against Cuba by U.S. companies and families dating back to the nationalization of all businesses on the island in the early 1960s.

Larger law firms with international corporate practices are adding attorneys and re-allocating resources to meet the surge in client demand. Some have already despatched lawyers to Cuba to meet government officials, accompany clients, and to establish relationships with law firms there.

Others have sent attorneys to legal conferences, seeking to master the swathe of new Cuba regulations issued by the U.S. Treasury and Commerce departments this year.

The president of the Cuban American Bar Association, Manuel Crespo, said his 2,250 members do not oppose the trip, but remain skeptical about dealings with the Cuban government.

Raul Castro took over the presidency in 2008 after ill health forced the retirement of his older brother, Fidel Castro, who had led the Cuban Revolution in 1959.

"Some of our older members don't want to see any relations until the current regime is out of power altogether," he said, citing the personal trauma of being uprooted from Cuba.

Miami's largest law firm, Greenberg Traurig, created a Cuba Working Group about eight years ago, and is among a handful of companies ahead of the game.

"Before Dec. 17 all we did was advise clients selling goods how to apply for a license as the embargo is still there," said Cuban-born Yosbel Ibarra, 42, who heads the firm's Latin American practice group.

But opening embassies and Cuba's impending removal from a list of state sponsors of terrorism will make a telling difference, Ibarra believes.

"It takes the stigma off doing business in Cuba," he said.