Justices appeared divided over the law 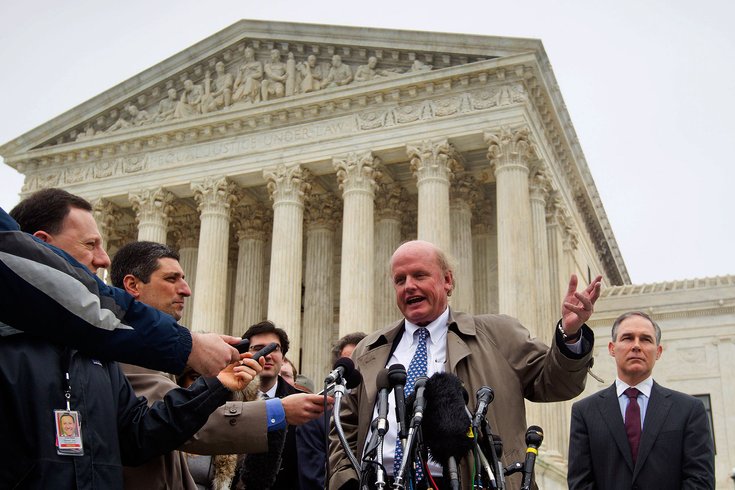 WASHINGTON - The U.S. Supreme Court appeared sharply divided on ideological lines on Wednesday as it tackled a second major challenge to President Barack Obama's healthcare law, with Justice Anthony Kennedy emerging as a likely swing vote in a ruling.

The nine justices heard 85 minutes of arguments in the case brought by conservative opponents of the law who contend its tax credits aimed at helping people afford medical insurance should not be available in most states. A ruling favoring the challengers could cripple the law dubbed Obamacare, the president's signature domestic policy achievement.

Kennedy, a conservative who often casts the deciding vote in close cases, raised concerns to lawyers on both sides about the possible negative impact on states if the government loses the case, suggesting he could back the Obama administration. But he did not commit to supporting either side.

Chief Justice John Roberts, who supplied the key vote in a 5-4 ruling in 2012 upholding the law in the previous challenge, said little to signal how he might vote.
The court's four liberals appeared supportive of the government. Conservatives Antonin Scalia and Samuel Alito asked questions sympathetic to the challengers. Fellow conservative Clarence Thomas, following his usual practice, asked nothing.
If the court rules against the Obama administration, up to 7.5 million people in at least 34 states would lose the tax subsidies that help low- and moderate-income people buy private health insurance, according to consulting firm Avalere Health.
The court challenge was financed by the Competitive Enterprise Institute, a libertarian Washington group.
The legal question is whether a four-word phrase in the expansive law saying subsidies are available to those buying insurance on exchanges "established by the state" has been correctly interpreted by the administration to allow subsidies to be available nationwide.
Exchanges are online marketplaces that allow consumers to shop among competing insurance plans.
Kennedy’s concerns focused on the possibility that if the law allows subsidies only for states that set up their own insurance exchanges, it would raise a new, more serious question about whether the law is unconstitutionally coercive by essentially punishing states that fail to establish exchanges.
“There’s a serious constitutional problem if we adopt your argument,” Kennedy told the challengers’ lawyer, Michael Carvin.
Kennedy said throwing out subsidies would potentially unlawfully pressure states and cause an insurance "death spiral" because premiums would increase. But Kennedy indicated he had an open mind over the challengers' interpretation of the law.
"It may well be that you're correct as to these words, and there's nothing we can do," Kennedy said.
Alito disputed Obama administration lawyer Donald Verrilli’s assertions about the disruptive impact of a ruling allowing subsidies only in states maintaining their own exchanges. Alito said states could simply establish new exchanges.
“Going forward, there would be no harm," Alito said.
Most of the 50 states have not created exchanges. Thirteen states and the District of Columbia have them, with another 34 run by the federal government and three operating as state-federal hybrids.
When Verrilli said people would lose tax credits immediately if the government loses, Alito suggested delaying the ruling's effective date to the end of the tax year.
Scalia said Congress could potentially amend the law to avoid disruption if the government loses. Verrilli expressed skepticism the Republican-led House of Representatives and Senate would do so.

Asked about Alito's comments, White House spokesman Josh Earnest said there are "no contingency plans that could be implemented that would prevent the catastrophic damage" to the law from a ruling favoring the challengers.
Earnest doubted a legislative remedy, saying Republicans who control Congress "struggle mightily to do even the simplest, most politically popular things" and have fought Obamacare "tooth and nail."
One possible outcome is the court could find the law  ambiguous and defer to the government's interpretation. In one of his few remarks, Roberts said that would allow a future president to reverse course. One Kennedy remark indicated he would not support resolving the case that way.
On a chilly, damp, cloudy day, a couple hundred demonstrators mostly from pro-Obamacare forces gathered outside the white marble columned courthouse. A couple dozen demonstrators from the conservative Tea Party movement rallied against the law.
The Democratic-backed Affordable Care Act, narrowly passed by Congress in 2010 over unified Republican opposition, aimed to help millions of Americans without health insurance obtain coverage. Conservatives call Obamacare a government overreach.
Hospitals have benefited financially from customers newly insured via exchanges. Their shares have been under pressure amid the risk Obamacare insurance would disappear if the subsidies are dismantled as the challengers demand.
During Wednesday's arguments, Community Health Systems Inc shares rose 5.6 percent, HCA Holdings rose 7.7 percent and Tenet Healthcare Corp rose 6 percent as investors saw Kennedy's comments as an indication he would side with the government, analysts said.
The case is King v. Burwell, U.S. Supreme Court, No. 14-114.