Villanova stands tall as class of the Big East in tournament 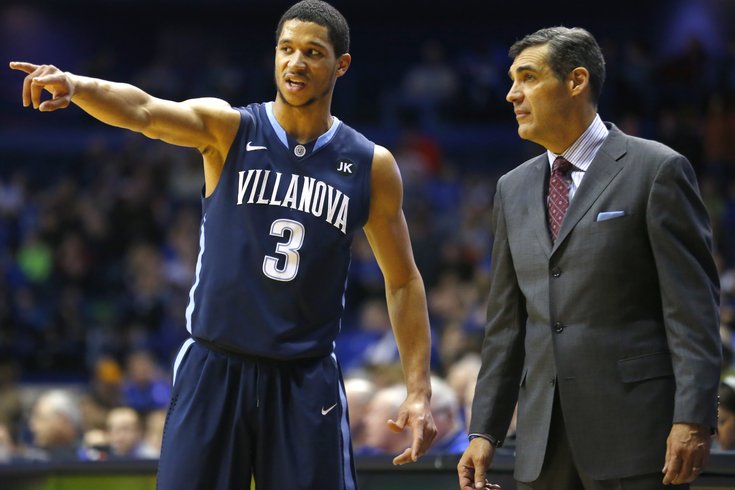 As Villanova celebrated a second straight Big East title at midcourt after its finale, video clips played on the big screen of all its triumphs: perfect at home, perfect in nonconference play and perfect in the Philly Big 5 series.

Under coach Jay Wright, the Wildcats have become the flagship program in the Big East, especially over 18 rugged games.

The Wildcats have earned their spot as the top seed headed into this week's Big East Tournament at Madison Square Garden and have staked a claim as a favorite for a No. 1 seed in the NCAA Tournament.

But while the Wildcats celebrated after they romped past St. John's on Saturday, the true reminder of the tough task ahead came at halftime. The program honored former coach Steve Lappas, stars Kerry Kittles and Alvin Williams and the rest of the 1995 Big East Tournament championship team. Those Wildcats remain the last in the program's history to win it all in New York.

"We know it's out there, we hear it," Wright said. "We know everything. We watch TV, listen to the radio. But that can't be what drives us."

"It would be great to win it," Wright said, "but we're not going to win it if we don't get past the first game."

The opener has been a thorn for the Wildcats through the years. The Wildcats were a top seed last year and swiftly eliminated in their opener by Seton Hall. They haven't won more than one game in the tourney since 2004. Under Wright, Villanova lost its opener as a No. 4 seed in 2010 and as a No. 10 seed in 2011.

The Wildcats open the Big East Tournament on Thursday against the winner of the No. 8 Seton Hall vs. No. 9 Marquette game. The Pirates have pestered the Wildcats the last two seasons. Seton Hall and fellow Big East rival Georgetown were the only teams to beat Villanova this season.

Sterling Gibbs hit a step-back jumper as time expired and Seton Hall stunned Villanova 64-63 in a thrilling quarterfinal last year, a loss that cost the Wildcats a No. 1 seed in the NCAA tournament.

Kentucky, Virginia and Duke seem locks for three of the top seeds. Arizona, Gonzaga and Wisconsin are in the hunt for the fourth spot.

The Wildcats know hearing their name called on Sunday as one of the four No. 1s is on the line with their effort this week.

"We know it's out there, we hear it," Wright said. "We know everything. We watch TV, listen to the radio. But that can't be what drives us. We have to be motivated by getting better every day and not looking down the line at what would the rewards be for winning."

The Wildcats aren't expected to steamroll through the tournament the way they did through the conference season where they finished with a 12-game winning streak. Georgetown and Butler are both ranked in the AP Top 25 poll and Providence and St. John's received votes.

Win or lose, conference coaches believed Villanova should be a No. 1 seed in the NCAA Tournament.

"I think they're a complete team. They have very few weaknesses," Butler coach Chris Holtmann said. "They'll have earned that right to have that opportunity given how strong our league has performed out of conference."

So which are the Wildcats to watch in NYC?

How about all of them.

Sophomore guard Josh Hart was named Big East sixth man of the year on Monday for a season that saw him average 9.7 points. He was second in the conference in 3-point shooting at 44 percent. He was ninth in field goal shooting at 49 percent.

The Wildcats are dangerous from long range, shooting 40 percent from 3-point range and hit 10 or more 3s in 12 of their 18 conference games.

But recent seasons in March have not been kind under Wright. The Wildcats have won just two NCAA Tournament games since reaching the 2009 Final Four and have not advanced out of the first weekend over that span. The Wildcats were a No. 2 seed last season but lost to national champion UConn.

Thirty years after the Wildcats won their lone national championship, they hope the road to No. 2 comes with a coronation in New York.