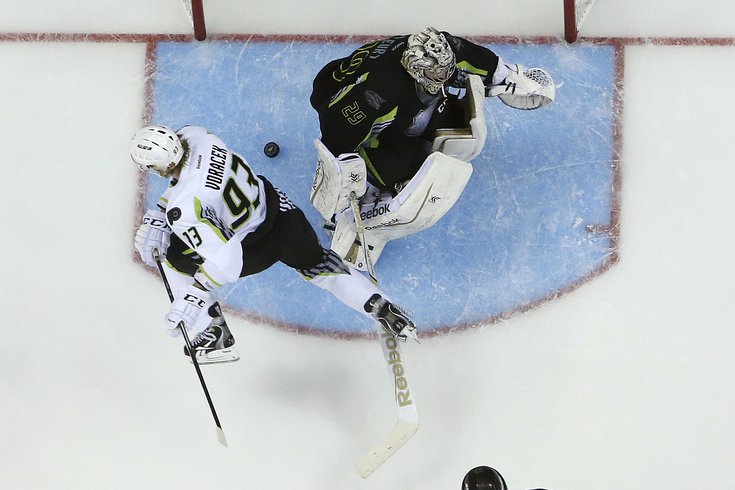 Jake Voracek leaps over the stick of Team Foligno goalie Marc-Andre Fleury after scoring a goal in the second period of the NHL All-Star game Sunday in Columbus, Ohio.

COLUMBUS, Ohio  — It was enough to give a goalie nightmares: A record 29 goals, 25 players with at least two points and eight with at least four.

In addition to the high-profile superstars who didn't make it to Ohio's capital city for the NHL All-Star game, defense also took a holiday.

The Flyers’ Jake Voracek scored a hat trick and tied a record with six points and John Tavares of the Islanders matched a record with four goals as Team Toews beat Team Foligno 17-12 on Sunday night in the highest-scoring NHL All-Star game.

"We had so many good players on each team," Voracek said. "There's going to be a lot of goals."

How much offense was there? Neither Voracek nor Tavares was the MVP, although that might have been due to a little home-cooking. Ryan Johansen of the host Blue Jackets had two goals and two assists for the losing side and was selected as the MVP in voting by fans on Twitter.

Tavares was as gracious about the balloting as he was good on the ice.

"I didn't come to the game trying to get the car," said Tavares, referring to the prize given to the MVP. "You get four goals, and obviously you think you have an opportunity. But Ryan had a good game. He had a couple of nice goals, made some nice plays."

Johansen, a budding star for the Blue Jackets, was touched by the smiles of the fans he encountered all week.

"It's meant a lot, being a part of it — seeing the fans and how much they've been enjoying all the festivities," he said. "We did a two-hour (autograph) signing. Everybody just seemed to be having a great time. All the kids were laughing and having a lot of fun."

The players, at least those on offense, had a lot of fun once the game started. The wild, no-defense exhibition even featured a fake fight to go with goals in bunches.

Captain Jonathan Toews of the Chicago Blackhawks had a goal and four assists, as did Boston's Patrice Bergeron. Dallas' Tyler Seguin had two goals and two assists, Filip Forsberg of Nashville, and Rick Nash of the New York Rangers — another former Columbus star — both scored twice, and Florida's Aaron Ekblad and St. Louis' Vladimir Tarasenko each had four assists.

Captain Nick Foligno, also of Columbus, was asked what he learned from being a captain of the team he helped pick.

"How to handle 20 egos," he cracked. "That's probably the hardest thing. But it's fun in the role of showing off our team and our city."

The fake fight provided some energy to a capacity crowd of 18,901 on the game's first visit to Columbus. Late in the second period, during a scrum in front of the net, Ovechkin and Foligno pretended to mix it up with Calgary's Mark Giordano and Chicago's Brent Seabrook.

All of the players were laughing after they grabbed and hugged each other.

It was fitting that Toews scored the goal that shattered the record. He held off defenseman Brent Burns of San Jose to find the net with a rising shot with 5:39 left.

Toews said he was just happy to silence the cannon that fires every time the home team scores at Nationwide Arena.

"It's loud enough that it gets on your nerves pretty quickly and especially when they score 12 or so goals," he said. "It gets you a little bit."

With the game tied at 4 after the first period, Team Toews broke it open with six goals in 9 1/2 minutes — and a record seven in the frame.

The teams scored twice within 8 seconds in the opening minute and three goals in a 58-second span, as the arena announcer stacked up goal announcements and was three behind at one point.

Nash, a former Blue Jackets captain who was booed every time he touched the puck, provided the go-ahead goal 4:08 in.

Pittsburgh's Marc-Andre Fleury, the only Penguins player in action after Sidney Crosby and Evgeni Malkin stayed home due to injuries, had a particularly forgettable period. He gave up six goals on the first 10 shots he faced.

"I wish I would have made a few more stops," he said. Then, referring to the heckling he got from Columbus fans, he added, "So they would have been more quiet."

NOTES: Fall Out Boy, O.A.R. and Locksley performed before and during the game. ... Calgary's Johnny "Johnny Hockey" Gaudreau was promoted earlier Sunday from the list of four rookies to Team Toews, giving each side 21 players. ... The NHL season resumes Tuesday night with 11 games.