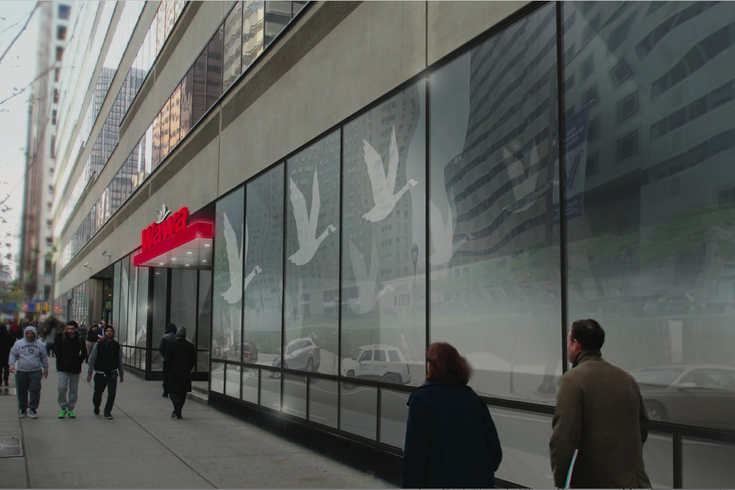 Rendering of the development of a new Wawa location set for 19th and Market streets in Philadelphia.

Seven months after the company opened its flagship location in downtown Philadelphia, Wawa has announced a new store 19th and Market streets in Center City.

On April 13, Wawa President and CEO Chris Gheysens was joined by Philadelphia Mayor Jim Kenney to reveal renderings of the new store. The announcement arrives in conjunction with "Wawa Foundation Week" to celebrate both the anniversary of the company's establishment in 1964 and the creation of its nonprofit community initiative.

Last September, Wawa debuted its Center City location at Broad and Walnut streets, revealing a forward-thinking, "open" design that caters to the bustling urban environment in which it's situated. In addition to indoor bar seating for hoagies, sides and coffee above Walnut Street, the 4,000-square-foot location along the Avenue of the Arts features custom wall tiling, large panel windowing and a bronze canopy atop the corner entrance.

At the time of its opening, Gheysens said the store would serve as a prototype for the remodeling of more than 700 locations across the Delaware Valley.

Once completed, the new store on Market Street will be Wawa's seventh in Philadelphia. There are two in West Philadelphia, one in Port Richmond, one on South Street and two on Walnut Street. The company's beloved Chinatown location closed its doors for good last June after 20 years in the neighborhood.

Wawa has been active of late, announcing a regional hiring spree to add 5,000 employees and a $5 million donation to the Children's Hospital of Philadelphia that will support the new Wawa Volunteer Program at the Buerger Center for Advanced Pediatric Care. The Wawa Foundation, created in 2014, encompasses a $50 million commitment to community causes that address health, hunger and leadership.