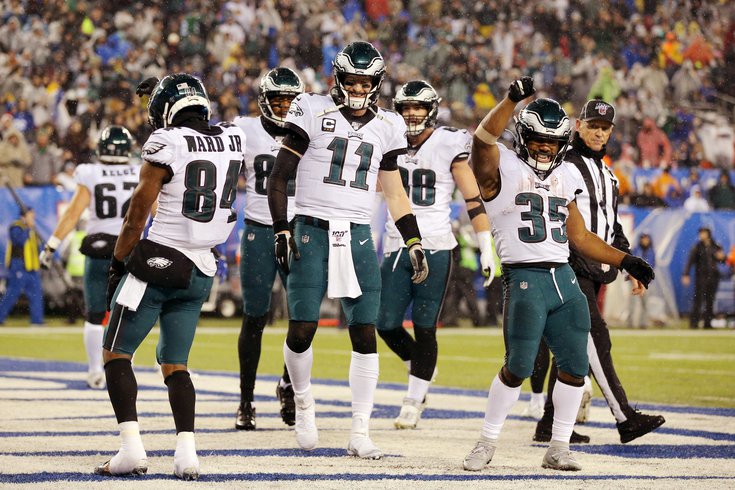 It's Carson Wentz and a bunch of practice squad guys against the Giants... again.

For the gambling enthusiasts, here are my Week 7 NFL picks. To note, the team logos indicate who I think will win the game, not cover the spread. At the end of the picks, I'll note a few teams that I like based on the spread. All the below spreads are courtesy of the consensus Week 7 odds at TheLines.com.

Giants at Eagles (-4.5): I was tempted to take the Giants to win this game outright, but after taking a closer look at the actual matchups, I like the Eagles to not only cover, but maybe win comfortably.

Lions at Falcons (-2.5): Ugh, never fun having to pick one of these two loser teams.

Browns (-3) at Bengals: After getting wrecked Week 1 against the Ravens, the Browns got well against the Bengals, dominating them on the ground game and winning a 35-30 contest that wasn't that close. After getting similarly wrecked by the Steelers Week 6, the Browns once again have the Bengals waiting for them, and I suspect they'll take care of business again. I'll lay the 3.

Steelers (-1.5) at Titans: This is a great matchup between Derrick Henry and the Titans' punishing rushing attack vs. one of the best run defenses in the NFL. I like the Steelers' chances of slowing down Henry, and believe their offense is diversified enough to put points on the Titans.

Panthers at Saints (-7.5): The Saints have managed to start 3-2 despite allowing 30 points per game. They've been a difficult team to figure out early on. Offensively, is Drew Brees semi-cooked? Are there locker room issues with Michael Thomas? The defense has some a bunch of big names, so why have they been bad?

Meanwhile, you have a Panthers team that many (self-included) thought would be one of the worst teams in the NFL, and while they have a long way to go, they've actually been fun to watch, and they play hard.

The 2020 Jets are on pace to have a point differential of -293, which as you can see above, would be the worst point differential in NFL history. We've been calling the Giants the worst team in the NFL for the better part of this season. Our apologies to them. The Jets are worse, and there's maybe an argument that the organization is going to keep Adam Gase around for the rest of the season to maximize their chances of losing as many games as possible.

This is an easy survivor call, by the way.

Cowboys at Football Team (-1): Even with how wretched the Cowboys looked on Monday Night Football against the Cardinals, this is a shocking line. I'll take the point, I guess. There's really no way to lose here. If you take the Cowboys and they win, hooray money! If they lose, we get treated to shot after shot of angry Jerry Jones in the luxury box. It's win-win.

Packers (-3.5) at Texans: Four of the Texans' losses have come via the Chiefs, Ravens, Steelers, and Titans, who have a combined record of 20-2, so they're probably better than their 1-5 record would indicate, which is reflected in the mere 3.5-point spread. But even if they have played some good teams, they have also proven that they can't beat good teams.

Chiefs (-9.5) at Broncos: The Chiefs swept the Broncos last season, with a combined score of 53-9. They've also won nine straight over Denver.

Jaguars at Chargers (-7.5): I guess Justin Herbert is mildly interesting to watch, but otherwise, who cares?

Buccaneers (-4) at Raiders: Way back before I was the super-serious journalist that you know today, I was an Eagles fan, like the rest of (most) of you. After the Eagles' depressing loss to the Bucs in the NFC Championship Game following the 2002 season, I wasn't sure if I was even going to watch the Bucs-Raiders Super Bowl. Begrudgingly, I bought a box at the bar I frequented after work in Manhattan after work, and ended up with 1 and 1.

I ultimately did watch the game, and when Derrick Brooks intercepted Rich Gannon with just over a minute to go and returned it for a touchdown (plus the extra point), the score became 41-21.

I was suddenly jumping up and down, because holy crap, my 1 and 1 was almost certainly going to hit. After the payout to the bartender running the box pool, it would have meant somewhere around $3,000.

At the time, I was a 25-year-old kid struggling to pay my rent from month to month in my apartment in Hoboken, while working in the city. There's never a bad time to just unexpectedly win $3,000, but if there was ever a time I could have really used that money, it was then. I was already figuring out what debts I was going to pay off, how much I would have left over, and what bar I would be patronizing that night to celebrate my fortune.

Bears at Rams (-6): The Rams have beaten up on the craptastic NFC East, but I'm skeptical of their offense against real NFL defenses, which the Bears have. But also, give me BDN in primetime.