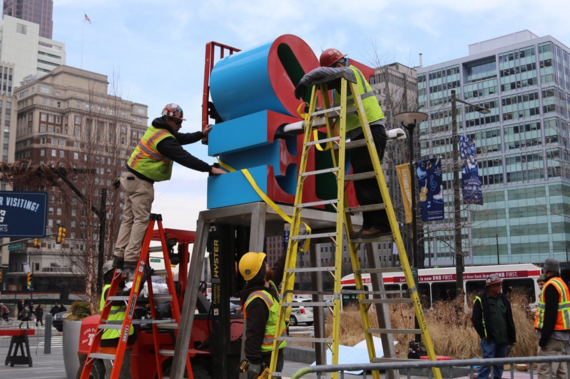 In spring, Philadelphia will have to endure a season without love this year.

The iconic LOVE sculpture was removed from display Wednesday in Center City as a fork lift helped workers safely move the art piece off its pedestal outside City Hall.

Crews worked today to temporarily move the LOVE sculpture for a makeover before it moves to its permanent home ➡️ https://t.co/KBfsZxZlsO pic.twitter.com/aJvTBMrz1l

On Valentine's Day, the Center City District hosted a farewell event for the statue’s last full day at Dilworth Park, its temporary home since February 2016 due to renovations to John F. Kennedy Plaza.

Since 1976, the work created by artist Robert Indiana has been on display in Philly to serve as a meeting place and a backdrop for photos by countless visitors.

The sculpture was last refurbished in 1998 but needs a "full conservation treatment," said Margot Berg, the city's public art director.

The Public Art Program will oversee the restoration project. During the process, workers will strip all of the paint from the sculpture to apply anticorrosion primer before repainting its original red, blue and green design. The clear protective coating will be applied to the statue, which will sit for several weeks to let the coatings dry and harden.

City officials expect to reinstall the LOVE sculpture back at its permanent home at JFK Plaza in the summer.

“As stewards of this beloved symbol of Philadelphia, we look forward to its return to public view at JFK Plaza, within sight of LOVE’s new companion piece by Indiana, AMOR, at Sister Cities Park,” Berg said.