Where the Eagles' season went wrong, part I: Turnovers

If you are a football fan, you already know that it's difficult to win football games when you turn the ball over. That's as obvious as football analysis gets. But just to hammer the point home, according to ColdHardFootballFacts.com, from 2008 to 2012, teams who won the turnover battle had a winning percentage of 0.786:

In 2014, the Eagles won the turnover battle in just four games: 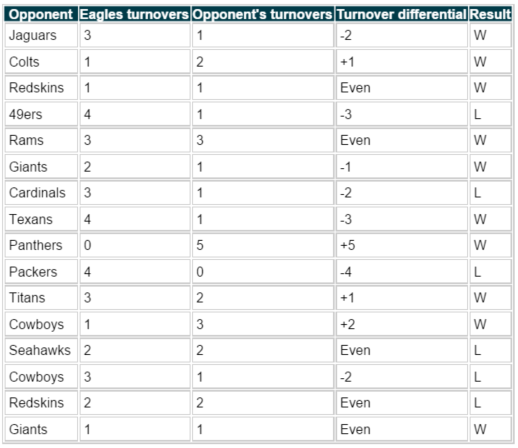 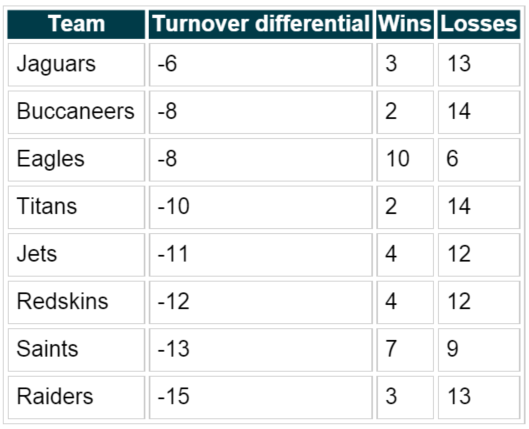 If you'll note, the Eagles are the only team among the teams listed above that had a winning record. In fact, if you were to take the Eagles out of the mix, the other seven teams had a combined win-loss record of 25-87, or a winning percentage of 0.223. In other words, in terms of turnover differential, the Eagles were among the absolute dregs of the NFL.

Even worse, no team turned the ball over as much as the Eagles. The Eagles not only had the most turnovers in the NFL, with 36, but they led the NFL in interceptions thrown and tied for the league lead in fumbles lost. They basically won the "Triple Crown of Terrible Ball Security." (trademarked):

If you're a glutton for punishment, you can watch all 36 turnovers in less than 35 seconds below:

This is nothing new. The Eagles have been a horrible ball security team over the last four years. Since 2011, they have turned the ball over 130 times, or more than twice per game on average. That also leads the NFL over that span:

If you'll note above, seven teams over the last four years turned the ball over at least 36 times. The Eagles did it three times: 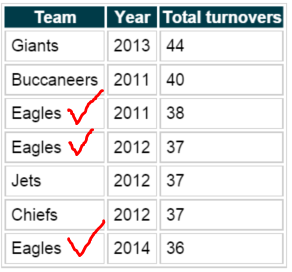 Some view turnovers as luck-driven. In the case of the 2014 Eagles, that was hardly the case. They got poor QB play for the better part of the season, and their skill position players were careless when they ran with the football. It's really kind of incredible that they won 10 games while leading the league in turnovers, but ultimately, their sloppiness (and not just bad luck) on offense was a major contributor to the downfall of the 2014 season.