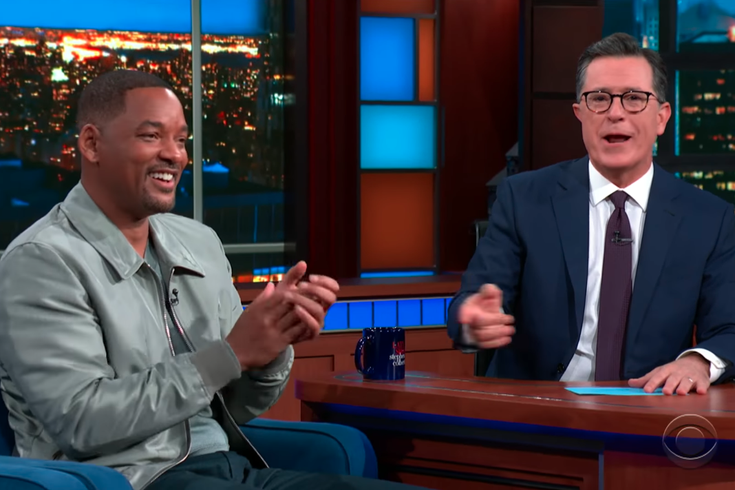 Will Smith during Tuesday night's episode of 'The Late Show with Stephen Colbert.'

Will Smith talked about his philosophy of staying fearless to stay young and his new movie, "Gemini Man," coming out this week, during Tuesday's "The Late Show with Stephen Colbert."

The Philly actor talked about his experience bungee jumping out of a helicopter over the Grand Canyon for his 50th birthday as part of the media company Yes Theory, which challenges people to do things that make them fearful.

"There's a certain naiveté to youth that is powerful. Not knowing can be a real power because you're aggressive," he said.

Smith actually chronicled his journey doing the jump, from setting up a live stream of the event, to stepping on the helicopter and going through with it, in multiple videos on his YouTube page.

He's been using the video platform pretty consistently over the last 12 months to chronicle more of his adventures. It's got some quality content on there. For example: "Freezing My A** Off!!" "I Tried Skiing IN THE DESERT," and "Drake Almost Got Me Killed (keke, do you love me?)."

Here's one of the many bungee jump videos, which are part of a series called "The Jump." This one got 19.9 million views.

Smith was on Colbert to promote his new action movie, "Gemini Man," which comes out on Oct. 11. Smith's character in the Ang Lee movie is an assassin who suddenly becomes the target of another killer who can predict his every move — because it's a younger clone of himself.

The trailer features some seriously scary-looking images of the younger Will Smith, who looks just like he did during his "Fresh Prince" days.