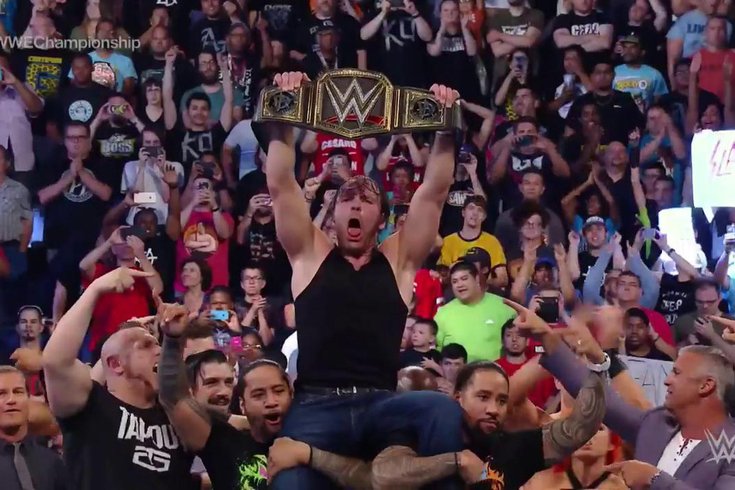 In a shocking finish to many, Dean Ambrose held onto the WWE Championship on Sunday night.

There were many questions heading into Battleground on Sunday night, and I think we’ve found some answers. There was no controversy surrounding the Triple Threat Match for the WWE Championship, another NXT talent made their debut on the main roster, and we may have witnessed the best WWE version of Kevin Owens vs. Sami Zayn, which is always a treat.

Breezango defeated The Usos during the Kickoff Preshow in a match that amounted to nothing. Moving on, here’s what went down Sunday night in D.C.’s Verizon Center:

Finally! Bayley made her main roster debut on Sunday night as the tag team partner of one of her greatest rivals in NXT, Sasha Banks. Charlotte and Dana Brooke know Bayley well from her time in NXT, so their reaction was less than thrilled as the fourth Horsewoman made her debut on the main roster.

The reaction for Bayley could have taken the roof off of the Verizon Center. The people at Nick’s Roast Beef loved it, as did yours truly.

In a visual that is sure to get much airplay from now until SummerSlam, Banks locked on the Bank Statement after a backstabber and got the Women’s Champion to tap out.

JBL mentioned during commentary that his “sources” informed him that this was a “favor” and a “one-time opportunity” for Bayley to be on the main roster, but I don’t see how that makes sense. The WWE crowd loves her, in NXT and on the main roster. Stifling her away in NXT is the wrong decision. There might be a reason why, but Bayley belongs on the main roster right now. Hopefully JBL’s “sources” were feeding him false information.

The New Day (c-Tag) vs. The Wyatt Family

In my Battleground preview, here’s what I said about this match: “With the group now disbanded, at least for now, it doesn’t make sense for them to get the win. [Xavier] Woods may get the pin here.”

Man, was that stupid. Though on The Straight Shooters podcast, I did say that Woods would break the trance of Bray Wyatt and possibly go bonkers on each member. That almost happened. Almost.

Woods broke the spell finally during this match and went crazy on Wyatt. It was pretty cool to see in terms of the storyline progressing, but it didn’t get Woods anywhere. Wyatt caught him with Sister Abigail and the Eater of Worlds grabbed a victory for his family.

Big E took a ridiculous bump to the outside – again – when dishing out a spear through the ropes. He landed right on his neck and grabbed it right away. He really needs to stop doing those bumps.

Ryder came out decked in the red, white and blue, and it actually made me think maybe there was a chance he could walk away with the title.

Rusev dominated a lot of this match after Ryder initially got some good offense in, but the story of the match would happen after it was over. When Rusev got Ryder to tap out to The Accolade, after Ryder almost successfully broke the hold, he wasn’t finished. Rusev continued the attack on Ryder, and that’s when a Hype Bro made his presence felt five days after being drafted to SmackDown.

Mojo Rawley came out and confronted Rusev, who backed away and walked backstage seemingly not knowing who Rawley was. This was played perfectly by Rusev.

Could we see the Hype Bros reunited on SmackDown?

This match was definitely the best match of the night and quickly became one of my best matches of the year candidates. The bumps these two took were vicious and I’m sure they’re very sore right now.

Zayn took a crazy bump when trying a moonsault off the ropes onto Owens on the outside, as he bounced straight up instead of backwards and wound up falling on his shoulder right on the ring apron. Those ring aprons don’t give very much, and WWE’s clear emphasis of utilizing spots like those leaves a lot to be desired.

“Fight forever!” was the chant of the night, and I couldn’t agree more. These two have chemistry in the ring that is off the charts. We just don’t see that in pro wrestling anymore.

Zayn would get the win after nailing Owens with two Helluva Kicks.

I highly suggest seeking out this match if you missed it. You won’t be disappointed.

I thought this feud was well-built and one of the better women’s feuds we’ve seen lately thanks to WWE’s newfound importance placed on these secondary feuds.

I thought this was when Lynch would get her revenge on Natalya for turning on her at June’s Money in the Bank pay-per-view, but I was wrong. Natalya made Lynch submit to the Sharpshooter after Lynch struggled to try and get a break. I’m not sure how I feel about this.

With Rusev retaining the United States Championship, it almost seemed like the end of this match was a foregone conclusion with The Miz retaining his Intercontinental Championship.

But we were wrong! Because The Miz didn’t win the match. He is, however, still Intercontinental Champion.

Bob Backlund and Maryse got involved outside the ring, Miz confronted Backlund, who had been slapped by the champion’s wife. Maryse then fell and pointed at Backlund as if to say he pushed her, and that caused Miz to go outside, confront him and push him to the ground. Poor Bob.

Young locked in the Cobra Clutch, aka the Million Dollar Dream, and wouldn’t let go. This caused the referee to disqualify both men and declare the ending of the match a double disqualification.

The promo before this match with Enzo and Cass has to be one of the best ones I’ve seen recently. From Enzo’s ridiculousness amped up to Big Cass’ “SAWFT!” to Cena’s facial expressions, I could have watched Enzo cut a promo for two hours straight.

Enzo and Cass are over huge, and pairing them with Cena was a good move. Both sides had tremendous moves, especially with Styles hitting Cena with the Styles Clash which looked like Cena moved his neck just in time to avert disaster.

Cena would wind up getting his revenge on Styles, finally, after hitting him with the Attitude Adjustment from the middle rope.

Randy Orton made his return to WWE after nine months on the shelf with shoulder and neck injuries. He really pandered to the crowd, becoming a more giddy version of the Viper that we haven’t seen in, well, maybe ever.

He and Jericho had a little fun, even saying that at SummerSlam, he decided to go one-on-one with Lesnar because he wanted to make a statement, as it wasn’t as easy as returning to face Fandango. If you’ll remember, Jericho and Fandango had a match [a pretty good one, actually] at WrestleMania 29.

Orton then said it might take 20 suplexes to go to Suplex City, but it takes one RKO to go to Viperville. No enhancements needed.

After that line, Jericho said Orton was in big trouble with Lesnar on that one, and Orton mouthed, “You’re probably right.” Maybe the best exchange of the night.

Orton teased hitting Jericho with an RKO since it can come out of nowhere, and then actually hit him with one.

This match began at 10:55 ET, so WWE is really taking advantage of the fact that it has the WWE Network and doesn't have to answer to cable companies anymore. Kind of.

This match was awesome. There’s no other way to describe it. From the three-way spots to powerbombing Reigns through the table to Rollins re-introducing the chair to Ambrose’s and Reigns’ backs much like he did two years ago, to Rollins hitting the Pedigree and Ambrose hitting Dirty Deeds while Reigns hit about 5,000 Superman punches, this match had it all. This is what I envisioned a Shield Triple Threat to be like.

They may have even outdone people’s expectations. It was truly a WrestleMania main event worthy match, and we got to witness it on Sunday, July 24th.

Ambrose had this to say after the match:

I’m very surprised Ambrose won cleanly, and I look forward to what WWE has in store for him next as he leads the SmackDown brand into a second life. As for the rest of the card, I thought it was pretty solid and deserves a B in terms of matches and entertainment value. Rusev vs. Ryder and Miz vs. Young hurt it a little bit, but that’s no reason to stay away from this pay-per-view.

The New Era begins Monday night in Pittsburgh, and hopefully we’ll have a new look and feel of the show. The same goes for SmackDown on Tuesday nights. Stay tuned.