Yards crosses the Delaware on trek to new brewery site 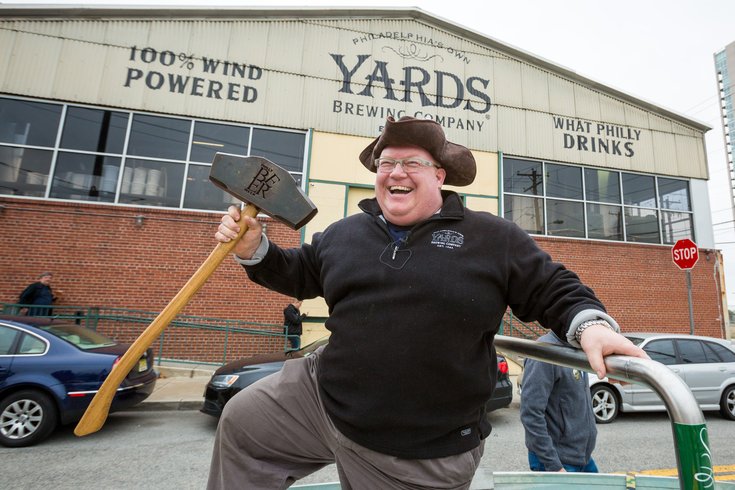 Yards Brewing Founder Tom Kehoe laughs as he loads into a boat on wheels which was used to process from the brewery's current location on north Delaware Ave. to the new location at 5th and Spring Garden Streets.

Doing his best impression of George Washington, Yards Brewing Company's Tom Kehoe crossed a Delaware of his own on Thursday — Delaware Avenue, site of the company's brewery.

With a three-corner hat on his head and a pint of beer in hand, Kehoe rode triumphantly aboard a rowboat pulled 1,200 feet yards westward by employees – from the brewery's current location at 901 Delaware Ave. to its future home at Fifth and Spring Garden streets.

The noontime procession on a dreary, cold autumn day marked the brewery's upcoming move to a 70,000-square-foot space inside a 225,000 square foot building — the former Destination Maternity headquarters — a day shy of Yards' 22nd anniversary.

According to Kehoe, co-founder and brewmaster at Yards, the need to expand production forced the move to larger quarters. Hoping to begin production of canned beers, he plans to hire about 70 new workers over the next three years at the new facility, which is nearly twice as big as the current brewery.

"We want to get into cans and we wanted to have a bigger operation," Kehoe said.

Kehoe said he's planning to replicate the tours and tasting room at the new building, as well as powering the operation entirely on wind power.

The building will need renovations before the company can move in, he said. Most importantly, the foundation will need to be reinforced in order to hold large brewing tanks. 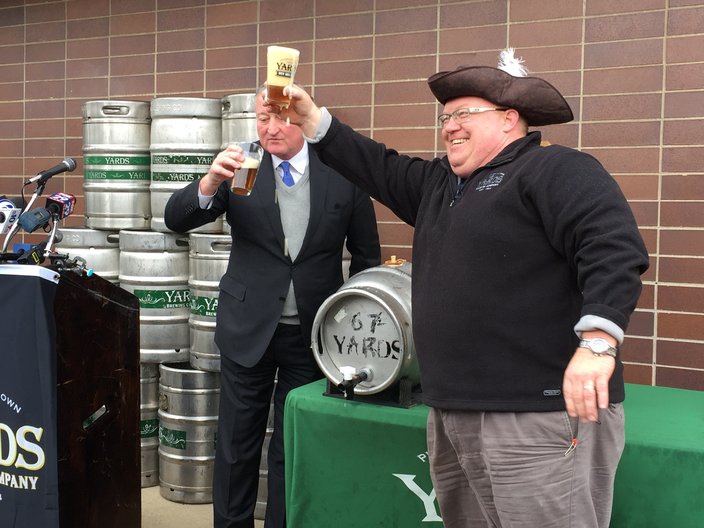 Yards Brewing Company co-founder and brewmaster, Tom Kehoe, hoists a pint of Yards IPA, while Mayor Jim Kenney samples the brew during a celebration event for the brewery's new building.

Groundbreaking for the renovations, is expected in January.

"It's going to be a real labor of love," said Kehoe.

Currently, he said, the hope is to have the new brewery up and running by October of next year.

During the day's celebration, Mayor Jim Kenney helped Kehoe tap a firkin — about 72 pints — of the company's IPA, and he shared a toast to the new brewery and its new home.

"Yards is Philadelphia through and through," said the mayor. "This will bring new life to this area of Spring Garden."

As for what the brewery intends to do with the current brewery on Delaware Avenue, Kehoe said that right now, he's not sure what will happen.

"I have no idea. We are going to move everything over and go from there," he said.

For some time through next year, Kehoe said he expects to brew his stable of ales in both places.

"If you're not growing, you're going the other way," Kehoe said.