The Eagles fan who snatched up wentzylvania.com 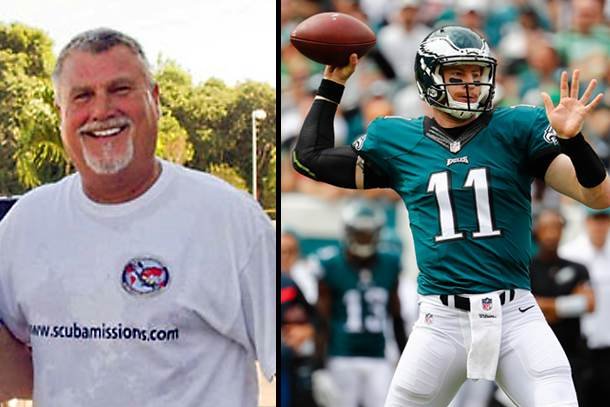 As Jim Mustoe watched the TV news show Eagles fans celebrating after the victorious debut of rookie quarterback Carson Wentz against the Cleveland Browns, he heard a fan yell a single sentence.

It didn't take long for Mustoe, a 30-year Eagles season ticket holder who grew up in King of Prussia, Montgomery County, and now lives in Key Largo, Florida, to see the marketing potential in that word.

He logged in right away to GoDaddy.com to register the wentzylvania.com domain. He also locked up the .org, .net and .info domains.

"I wanted to do it right away and somebody was going to grab it in minutes," said Mustoe, 61, who has bought a number of domains for his various businesses. He paid a couple of dollars for each one, he said.

"It's not much different than laying a few bucks down on the blackjack table," he said Friday afternoon in an interview with PhillyVoice.

Mustoe's not quite sure yet what he will do with the domains, and plans to let them remain parked until the season has a chance to progress. Meanwhile, he is conducting research now with possible partners and may even decide to develop a site himself.

"I see it as an avenue for marketing to not just Eagles ticket holders but Eagles fans across the country," said Mustoe, a graduate of Upper Merion High School and Widener University School of Law. "A place to know everything he is doing."

It's clear that Mustoe would welcome the opportunity to talk to Wentz and the Eagles directly about how the domain could be utilized.

"I hope one day before I die I can say I saw the Eagles win a Super Bowl. Wentz looks like he has everything we need. It's amazing." – Jim Mustoe, season ticket holder and owner of wentzylvania.com

"I'm an Eagles fan," he said, adding he'd like to see wentzylvania.com become "something very functional and exciting to Eagles fans."

Mustoe, president of the United Truckers Association, still has a home in King of Prussia and spends a good amount of time in the area each year. He'll be in his seats at the Linc for a number of home games this season.

A longtime diver, he moved to Key Largo, one of the best diving sites in the United States.

In 2009, he founded the Worldwide Christian Scuba Diving Organization – "Jesus is the regulator of my life" – a nonprofit group whose members combine their love of diving with mission work. Their motto is "One Trip, Two Purposes."

This year, about 30 members of the group went on trips to Curacao and Roatan in Honduras, where they helped build a new home for a woman and her six boys. They also helped build a church there.

"We go to share the Gospel with them," he said. "We all love exploring God's creations underwater.

Mustoe would love to make Wentz – a self-professed outdoorsman who wears his Christian faith on his sleeve – an honorary member of the nonprofit organization, even if the Eagles won't let the presumed future of its franchise strap on a scuba tank.

Like countless other Eagles fans, Mustoe said he is impressed by the way Wentz and his teammates have played on the way to a 2-0 record. He is looking forward to Sunday afternoon's game against the Pittsburgh Steelers, and hopes Wentz will take fewer licks from the defense.

"All of us are waiting for a Super Bowl in Philadelphia," said Mustoe, who traveled to Jacksonville in 2005 only to see his team lose Super Bowl XXXIX to the New England Patriots. "I hope one day before I die I can say I saw the Eagles win a Super Bowl. Wentz looks like he has everything we need. It's amazing.

"This is going to be a good year."