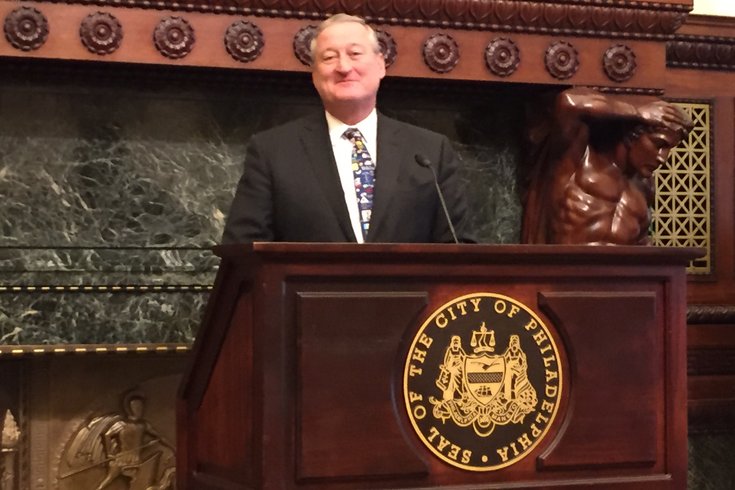 After months of debate, discussions and a final compromise on Thursday, the Philadelphia City Council passed a sugar-sweetened drinks tax – better known as the soda tax – at a rate of one-and-a-half-cents-per-ounce by a vote of 13-4.

The tax is expected to generate $91 million a year in new funds for the city, just a few million short of the $95 million annually that Mayor Jim Kenney's original proposed tax – at a rate of three-cents-per-ounce – was expected to bring.

After a long meeting, with more than 100 bills and resolutions on the docket, City Council voted to approve the tax, a decision that was followed by a loud round of applause from the packed gallery in attendance. Council also passed the city budget that had been proposed in March.

Following the vote from council, Kenney said approval of the tax was 'just the beginning" for a wealth of initiatives that he hopes to bring to the city.

"This is a terrific day ... This is just the beginning of the process of changing the narrative of poverty in our city," Kenney said. "And this is the first step in finding the resources we need to get our kids into pre-K education, to institute the community school model and to get our parks, recreation centers and libraries where they need to be out of fairness to the people who live in our community."

Moments after the tax was approved, the Philadelphians Against the Grocery Tax, a coalition opposed to the sugar-sweetened drinks tax, released a statement saying the group plans to challenge the new tax in court.

"This tax is unconstitutional, and that's why we will take this fight to the courts to defend our broad-ranging coalition of more than 30,000 Philadelphians and 1,600 businesses and community organizations," the group said in a statement.

Kenney believes the bill will stand up in court.

"We are on strong legal ground," he said. "We will see what they do, how they do it, how they approach it. They spent a long time twisting the facts in this whole debate on television, spending millions of dollars (on ads) and that wasn't effective. So, we will fight the next fight when it comes, and we will see how it goes. But, we are confident, both internally and (from) outside legal advice, that we're solid."

With Thursday's vote, Philadelphia will become the largest city in the country with a sugar-sweetened drinks tax.

But, it almost didn't happen.

Last week, City Council's Committee of the Whole voted to support this plan, but not before lowering the rate from three-cents-per-ounce to one-and-a-half-cents-per-ounce and adding in diet sodas to the tax.

Before Thursday's meeting, members of City Council did not disguise their opposition to Kenney's initial sugary drinks proposal – Quiñones-Sánchez, Taubenberger and Councilwoman Jannie Blackwell, D-3rd District even attended a rally in front of City Hall protesting the tax.

Before City Council's committee of the whole was set to review the tax, the Philadelphia Inquirer obtained a memo, drafted by the office of City Council President Darrell Clarke, D-5th District, that offered a variety of alternatives to Kenney's soda tax plan – a proposal Clarke has called "ridiculous." Among those were a container tax and the sugar-sweetened drinks tax at a variety of rates.

The only beverages exempt from the container tax would be baby formula, fountain drinks, milk and milk substitutes (soy milk, almond milk, et al.), with a 15-cent-per-container tax.

Kenney's initial proposal would have hit sodas, ice teas, sports drinks and more – but not diet sodas – at three-cents-per-ounce.

With Thursday's vote to approve the tax at a lower rate, the city will still generate the funds needed for Kenney's proposed universal pre-K and community schools plans, as well as funding to revitalize the city's civic spaces – like the deteriorating city's parks, recreation centers and libraries – as well as other concerns like body cameras for the city's police officers, the city's pension program and the fund balance.

In recent weeks, Philadelphia's Director of Finance Rob Dubow said the lowest the rate could go and the city still be able to afford these initiatives would be a rate of two-and-a-half-cents-per-ounce.

That's because, along with the proposed $26 million for a new pre-K program, $6 million for a community schools, $550,000 for police body cameras, and $26 million into the city's pension fund in the budget, the city would need to secure $300 million in bonds for civic space improvements.

Without enough coming in to begin paying back those bonds, Dubow has said the city couldn't secure them, meaning Kenney's initiatives could not get the needed funding.

But, by adding diet soda to the tax, the city can generate enough to afford these initiatives.

Kenny said that he expects to sign the sugar-sweetened drinks tax bill on Monday. It would then go into effect in January of next year.