Philly mayoral-debate season reaches the end of its line 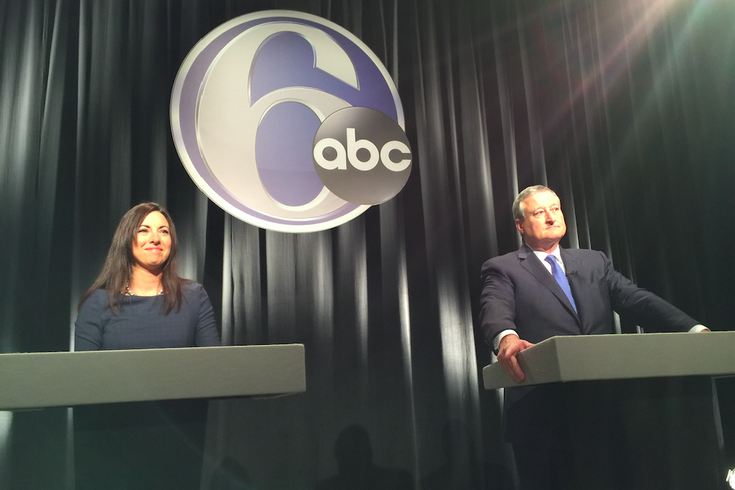 Melissa Murray Bailey and Jim Kenney faced off in the last debate of Philadelphia's mayoral-election season on Friday at 6ABC studios.

Yeah, yeah, I know I wrote that the mayoral-forum coverage train ended with this week's soiree at Temple University, but after months and months of campaign observation, heading over to 6ABC's studios on Friday afternoon to check out the final debate was an inevitability.

The hour-long debate offered one last chance to see Jim Kenney (D) and Melissa Murray Bailey (R) make their respective cases for why they're deserving of voters' support.

The debate – it will air at 11 a.m. Sunday – covered a slew of oft-discussed topics ranging from job creation, the minimum wage and staving off the brain drain to police/community relations, stop-and-frisk and the budget impasse in Harrisburg.

Among the highlights, as captured by PhillyVoice's live-tweet of the debate:

“There's so much waste in our city,” says @melissaformayor, noting paperless gvt. "needs to be implemented." Savings $200-250m #nextmayorPHL

What's happening in Harrisburg "is a great example of what not to do as a leader," says @melissaformayor re: budget impasse. #nextmayorPHL

.@melissaformayor: "Easy for [Kenney] to talk about good relat. w/ teachers union" thanks to their campaign donations to him. #nextmayorPHL

"Testing-Industrial Complex" is the term @JimFKenney just used to describe standardized testing in school. (This is a new one) #nextmayorPHL

If you come to live in our city, "I don't care if you're documented or not." If you break law, you get locked up. @JimFKenney #nextmayorPHL

No, the debate itself didn't feature much confrontation (i.e. Bailey attacking Kenney in an attempt to build reputation-recognition and reverse decades of Democrats holding that second-floor office in City Hall.)

Over the next 10 days, she will focus on attending as many community meetings as possible to make her case. (That includes a Tuesday night stop at the Quizzo event I host at Billy Murphy's Irish Saloon in East Falls, which Kenney did in the spring as well. Stop by!)

"We hit five events in three hours last night, so we're still working really hard to get the message out to as many people as possible," she said. "People are glad that someone is coming out and hearing their voices. That's what my whole campaign has been about."

"It would generate a lot of money and I think it's hypocritical, frankly, to sell, tax and promote alcohol in the state when you don't do the other thing. You could move the wine into the Wegman's, Trader Joe's and some retail spots and utilize the space left for the selling of cannabis in the event it ever becomes legal." – Jim Kenney

Speaking about the campaign as a whole, Bailey said she's found there are some stark contrasts between her and Kenney, the perceived front runner in a race that also includes three third-party candidates on the ballot.
"He's talking about inputs and I'm talking about outcomes. We can do everything that sounds good, but if it doesn't deliver results, then it doesn't matter. It's just wasted money and wasted time," Murray said. "That's what we've been doing in this city for too long.
"We give ourselves a pat on the back because we started a program that sounds good. But still, kids can't read, people don't have jobs and they keep paying more taxes so they've got to be wondering 'what have I been paying for since there are no results?'"

After the event, Murray – who confirmed her campaign won't air television ads but will "likely" be on radio – was asked whether she called out Kenney enough to have an impact.

"Not as much as I could have. There's so much opportunity to do that because of where the city is and what he has done or hasn't done during his time in the city, and some of the ideas that are blatantly not going to work," she responded. "But, I have to balance letting the people get to know me, and know my experience, and making sure people know the promises are being made are actually not promises that can come true."

"He's talking about inputs and I'm talking about outcomes. We can do everything that sounds good, but if it doesn't deliver results, then it doesn't matter. It's just wasted money and wasted time." --Melissa Murray Bailey

For his part, Kenney stuck to a strategy – going back to the primary season – of not attacking other campaigns. He spoke about a need to have more businesses opening in the city to stave off residents commuting to jobs in the suburbs.
So, after the final stop in a long line of mayoral debates and forums, I asked him about the potential of marijuana being legalized and distributed in Liquor Control Board state stores.
Specifically, did he want this to happen?
It's an issue that came up in February and, again, this week:

Jim Kenney would like to see pot legalized and distributed via LCB stores. https://t.co/g1RTWi4zRe Sounds like a good plan, thoughts?

"I didn't say I wanted them to. I said if the state ever legalized it, they have a closed operation that would be not conducive to selling to minors," he said. "The hardest place to get served underage is a Pennsylvania state liquor store.

"It would generate a lot of money and I think it's hypocritical, frankly, to sell, tax and promote alcohol in the state when you don't do the other thing. You could move the wine into the Wegman's, Trader Joe's and some retail spots and utilize the space left for the selling of cannabis in the event it ever becomes legal."

He also urged voters to head to the polls not only for his race, but for the state Supreme Court races.

"If we're going to be protected by some of the crazy stuff that comes out of Harrisburg, the state Supreme Court is the way to do it," he said, citing voter ID laws as an example.