'It breaks my heart,' says Hakim Hopkins, of the stories he hears from families with loved ones behind bars 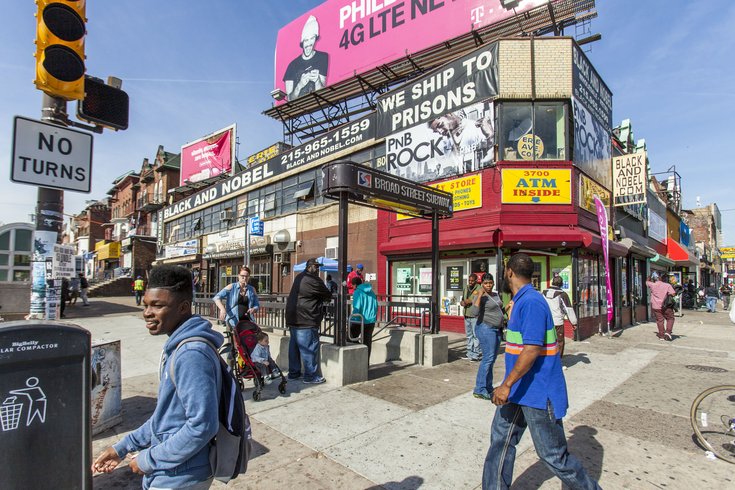 Pass through the intersection of Broad and Erie in North Philadelphia and it’s impossible to miss the city's last black-owned bookstore.

“Black and Nobel,” the huge signs read in stark white text on a black background. “We Ship to Prisons.”

Located in the heart of North Philadelphia’s shopping district, Hakim Hopkins’ store is located in a two-story walk-up. Occupying the long expanse of the second floor, the shelves are lined with self-help books, religious tracts, novels with titles like From A Thug 2 A Man (by C-Note), entrepreneurial tomes like From Incarnation to Incorporation, and Ben Carson’s obligatory pre-presidential run memoir. The store is cooled only by cracked open windows and a couple of giant fans.

“When we started we weren’t the only black bookstore, but we were the only cool one,” says Hopkins. “We added hip-hop, we had celebrities coming in. We didn’t just want religious stuff, we wanted street novels, we wanted love novels, we wanted books on finances and history. We just mixed it all together in a big old pot. And we became the spot.”

Hopkins was born in West Philadelphia, but as a young man moved to South Jersey and managed the kitchen for many years at Moe’s Chicken, a famous soul food restaurant in Atlantic City. But in the late 1990s, Hopkins went through a rough period in his life. Books saw him through, specifically Dennis Kimbro’s Think and Grow Rich: A Black Choice (a riff on Napoleon Hill 1937 self-help books). 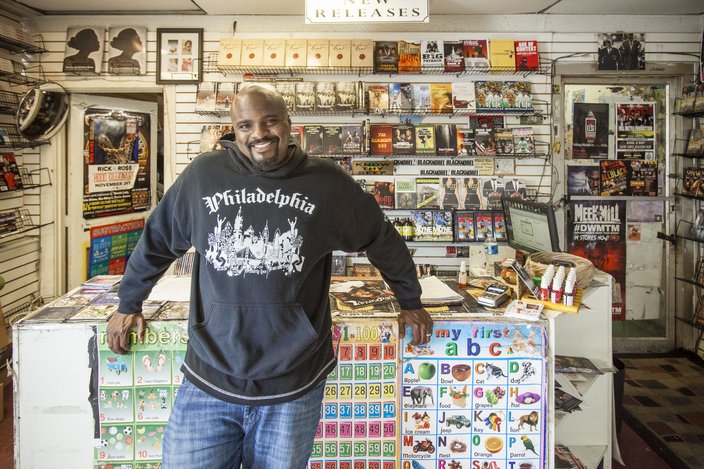 Hopkins was inspired to get a vending license and got his start in the early 2000s selling books on the street, setting up a table laden with his products around Temple in Center City, and on the 52nd Street shopping corridor in West Philadelphia. With his associate Joseph Mitchell, Hopkins would move his wares around the city on the subway using a hand truck. Mitchell would re-supply up in New York, riding Chinatown buses to bring down new batches of books.

One night after work, Mitchell and Hopkins were hanging out in Rittenhouse Square when they came up with their enterprise’s name.

“We had our table out there. It was after-hours and we were rapping, actually rapping, we was tripping,” remembers Hopkins. “And you [Mitchell] said ‘I’m black, and you noble’ and we were in front of Barnes and Noble. And I was like, that’s the name.”

Soon thereafter Hopkins bought the long-vacant space at Broad and Erie and opened up the bricks-and-mortar Black and Nobel. A year later, at the suggestion of a customer, Hopkins began orchestrating the shipment of packages to prison inmates. The service was an immediate hit, and it isn’t hard to see why. Based on data from Justice Atlas, Black and Nobel’s zip code had the city’s second highest number of adults imprisoned in 2008 (the most recent data available) and the fifth highest rate of imprisonment. The median income is $14,185. Black and Nobel is bordered by four of the city’s other zip codes with the highest real numbers and rates of imprisonment. 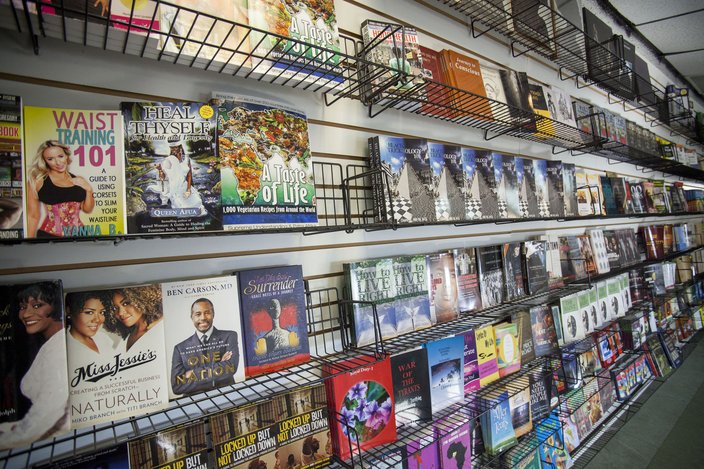 A selection of books on the shelves at Black and Nobel Books in North Philadelphia. (Thom Carroll / PhillyVoice)

Hopkins handles the prison shipment aspect of Black and Nobel personally, giving his private cell phone number out to customers, while his employees help with in-store sales, social media promotion, and all the other myriad tasks that he can’t get to. He estimates they send 50 or more packages a day.

Asked whether families could just turn to Amazon to send package to their loved ones inside, Hopkins says he isn’t worried.

“I don’t look at them as competition; families have to trust you to do this,” he says. “Prison is rough; they make it rough doing visits and getting mail. A lot of the families come here because they get treated like crap. We are like that shoulder for them to lean on. We help them, we console them, we let them cry on us. It’s deeper than just us making money.”

People sometimes assume that Hopkins himself has been to prison, but other than a brush with juvy he doesn’t have personal experience with the system. (“That’s not who I am, I’m a happy married man.”) But dealing with the traumatic effects of imprisonment is growing increasingly difficult, especially as his walk-in trade has slowed as more of his customers have turned to Kindle and other electronic readers. The shipments to inmates have become the heart of Black and Nobel’s business.

“It breaks my heart,” says Hopkins, who has six children. “I try to leave it here when I go home, but it’s written all over my face. It becomes very emotional. I’m drained because I hear the real stories. You see what’s on Channel 6; we get the real deal uncut. Nobody wants to hear that for 10 hours a day. I’m just getting to this level where I’m getting a little burnt out. I just need to make some changes.”

Hopkins isn’t sure what those changes will look like yet. At the very least, he can look forward to the end of summer, which is always the slowest time of year. The winter holidays and the lack of outdoor competition in the snowy months always boost his walk-in sales. And Hopkins’ customers don’t need to worry about Black and Nobel going away or the prison shipments tapering off.