Mayor-elect cooks something up 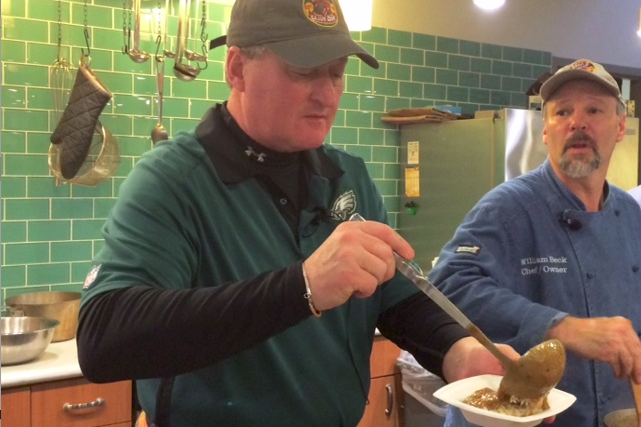 Mayor-elect Jim Kenney, showing he is a good sport and has a sense of humor, says there is no good food to eat while watching the Eagles play this season, despite sporting a green jersey during a cooking demonstration at "the best place in Philadelphia," the Reading Terminal Market.

The mayor-in-waiting struggled a bit with oyster shucking for the gumbo, a mix of shellfish, sausage and turkey.

But he seemed to savor slurping a freshly opened one down, brine dripping down his chin.

The market has a series of events featuring its merchants and sometimes guest such as Kenney.

The demonstration drew in Barbara Beatrice, 52, and Jeff Fritzinger, 52, both of Newtown, Bucks County.

The were in the city for a "hike" along a chocolate trail and they wandered in for a sample.

"I don't cook well, but I enjoy watching, confesses Beatrice.

Kenny said he likes to cook, as well as eat, though he did more cooking when he had small children.

He also said he used to eat at the market three times a week when he was a member of City Council.