Nothing to sneeze at: allergies take toll on sufferers and economy

It costs Americans billions each year to care for their allergies 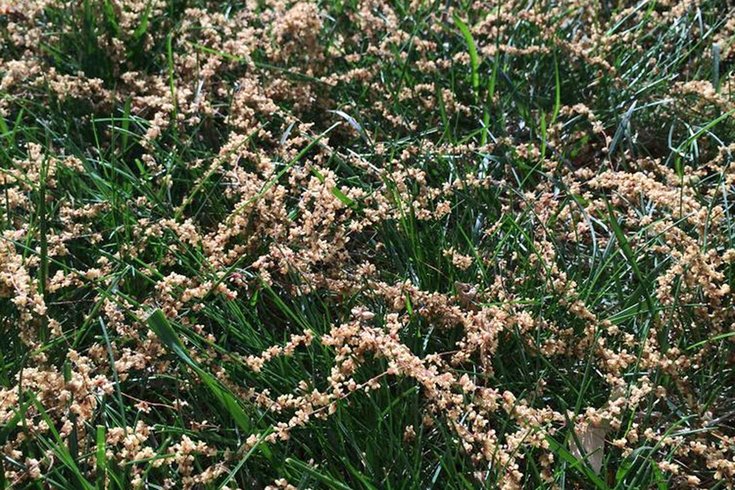 Strings of tree pollen cover a lawn in Montgomery County.

Allergies not only redden eyes, cause sneezing and rub throats raw, they can also dent wallets and the local economy.

And the impact may be especially acute this year as Philadelphia wrestles with an intense allergy season caused by a late start to spring and a rush of pollen production that has caked cars in yellow and devastated the immune systems of those with sensitive sinuses.

“When pollen counts are as high as they have been recently, [patients] are desperate for something to work,” said Michael Palumbo, a physician and member of the Pennsylvania Allergy and Asthma Association’s board.

According to a 2011 report on allergies by Quest Diagnostics, the average allergy sufferer takes 1.7 more days off work than their allergy-free peers. Those days cost the economy $700 million annually, the report said.

Allergies are the body’s overreaction to an outside substance such as food, pollen or drugs. Symptoms can range from a mildly runny nose to anaphylactic shock, which can cause breathing difficulties, an elevated heart rate and can be fatal in rare instances. In addition to missed days at work, allergy sufferers experience symptoms 69 days a year on average, according to the Quest study, which may make it harder for employees to do their work.

The sickness can also be costly. Often before a patient dials their allergist, they have already visited their local pharmacy and tried a series of over-the-counter medications, according to Palumbo.

“They aren’t just buying one” medication, Palumbo said. “They’ve tried four or five different things.” Each of those can cost around $12.

And that’s if the doctor has time to see you. Because as pollen accumulates, appointments get booked. During the winter months, Palumbo said he can usually see patients within a week of them calling for an appointment. This time of year it might be a month.

If a patient is prescribed medication with insurance, the cost will increase by about $15 to $40, he said.

There are ways to try and reduce some of that, according to Donald Dvorin, a doctor and assistant professor of clinical medicine and pediatrics at Drexel University College of Medicine.

“First of all there are a lot of good programs to reduce costs if you have standard insurance,” he said. His office, for example, has coupons. He estimated the total cost for a bevy of eye drops, nasal sprays and allergy-fighting antihistamine tablets could be around $50.

“The incidence of allergies is around 25 to 30 percent of the population,” he said. “So take that into the workforce, a third of the people suffer with this.”

“And this time of year, it is not uncommon for people to not be able to function well,” Dvorin said.

To deal with the increased need, his office is open six days a week during allergy season.

Not only do people have to care for themselves, but they may have to miss work to go to a doctor’s appointment or care for their allergic kid who is too sick to go to school.

“This time of year, I would say 40 percent of all our patients… should have been here several weeks earlier,” Dvorin said.

The cost of all this stretches into the billions. About $1.3 billion is spent on doctor office visits and another $11 billion for medications, according to a more than decade old study cited on the Asthma and Allergy Association of America’s website. And Quest Diagnostic’s study suggests that the number of people who suffer from allergies is only growing.