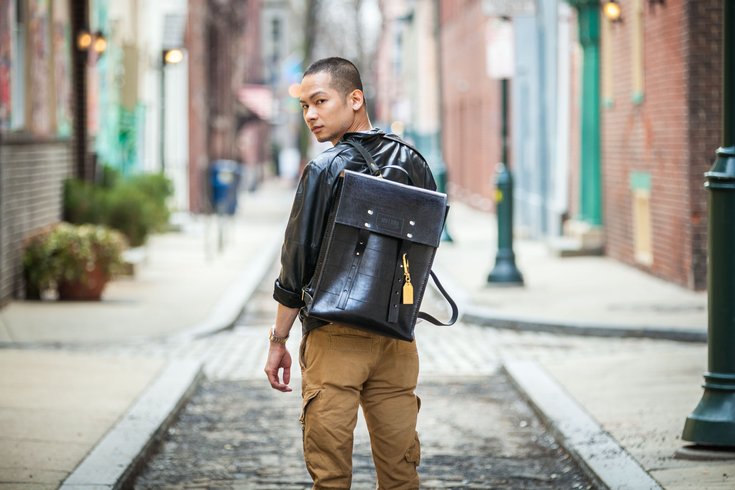 Seen in Philly: Loi carrying his asphalt black, leather Mifland bag, accessorized with a charm. "Because of the shape of it, I can store a lot of stuff in it," he says. "It's my school bag."

Don't let anyone dupe you into thinking dudes can't carry bags.
According to a February report from NPD Group, a consumer tracking service, U.S. men's bag sales in 2014 increased by double-digits, now accounting for $2.3 billion of the $11.5 billion industry. Women's handbag sales, meanwhile -- which account for 49 percent of all accessory bag sales -- are down by 5 percent, with men purchasing 47 percent more handbags year-over-year. The increase in men's bag sales reportedly offsets what otherwise would have been an industry-wide loss, attributed to the decline in women's handbag sales.
Surprisingly, men's bag sales aren't just on the up-and-up; they're carrying the industry's growth.
Elissa Bloom, executive director of the Philadelphia Fashion Incubator, told PhillyVoice.com that it's not that men's bags are "trendy," per se, but that modern men are suppressing any man-bag apprehension for the sake of practicality. iPads, laptops, video games -- there's no shortage of items to carry around anymore, whether male or female. And they've gotta go somewhere.

"I think it’s become a need that’s being filled -- men might carry more than one phone now, for example, and the iPhone 6 is so large that it doesn’t fit in a men’s pant pocket. So, these smaller accessories for men have started to take popularity," Bloom says. "They've gotten a lot more stylish than just the basic briefcase or backpack."

As for why women's handbag sales are down, she says, it's because women stocked up on accessories during the recession. In short: Their closets are at max capacity.

She says Philly's average gentleman isn't quite caught up with fashion -- bags or otherwise -- but that the city is starting to react to a cultural change in attitude when it comes to style.

"The popularity of the food scene in Philly, that also translates to fashion: ‘I don’t want a throwaway piece from H&M,’" Bloom says. "People are starting to wake up and buy more quality products for their wardrobe, and that’s starting to filter down to men.” 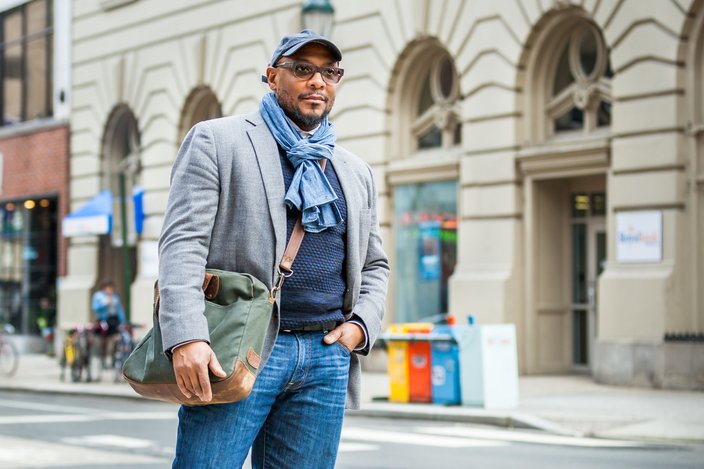 Seen in Philly: John Stone with his green oiled-canvas (and organic) United By Blue messenger bag. "When I buy a bag, I look at shape and what it can hold; this one carries my Macbook Pro," he says. "But right now I've got my eye on a new Topo Design bag." Photo: Thom Carroll / PhillyVoice.

South Philly's Hamid Holloman, founder of Custom Lifestyle, is banking on that fact.
Holloman realized a year ago that his men's collection was missing something big: bags.
"Now is a great time to start making and designing bags," he told PhillyVoice.com. "Men aren't just carrying their wallets anymore."
Since 2007, he's been designing print tee-shirts (he has a graphic design background) and, more recently, has been repurposing vintage textiles from World War II and mixing them with patchwork patterns and raw denim to make modern apparel. He takes the same approach with his bags, which he sells to Armour Menswear at 704 S. Fourth St., and Art in the Age of Mechanical Reproduction, at 116 N. Third St.
From a design standpoint, he says the bag can fill the role of either the cherry-topper or the soul of an ensemble.
"Bags, they're a way to add more levels to the story you tell with an outfit -- you have the bag to complete the look," he says. "But a bag is also a statement piece. You could be plain from head to toe but have a nice designer bag -- for some people, it might even be easier to express themselves with a bag." 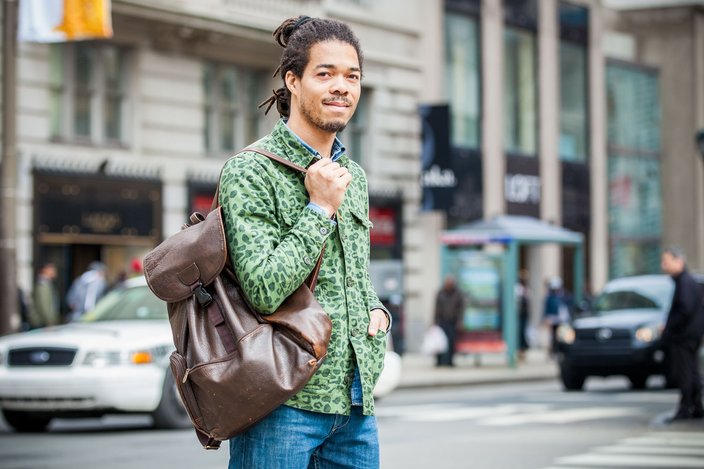 Seen in Philly: Joseph Plant carries his A.P.C. brown-leather backpack while strolling through Rittenhouse Square. "I like something that works with my existing attire, is comfortable and is wearable while biking," he says. "And I need compartments for chargers, USB drives and my computer." Photo: Thom Carroll / PhillyVoice.

OK, so now you get it -- men's bags are in.Wonderful. Now, the all-important question that comes next: What do I buy?

Raphael Monroe, a men's wardrobe stylist for Old City-based Evoluer Image Consultants, says he's been posed with this question more than ever in the past three years. Men mostly come looking for a bag because, he says, new technology makes them "necessary."

Monroe gave PhillyVoice.com a breakdown of how to bag-shop by need:

For the Gym-going Guy: Seek out a duffle bag. Reason being, Monroe says, is it's multi-purpose, and goes well with all the new sports-apparel fashion that's been trending of late. "[Duffles] vary from low-end to high-end -- at H&M you can get one for $35 to $80, or you could take it up a notch to Banana Republic at $120," he says. "But I also have clients who want Salvatore Ferragamo, which has bags at $2,500, and the top-of-the-line duffle at Hermes, which is $4,000." Alternatively, he says, go for a tote -- it's big enough to carry gym clothes, but sleek enough to pass off as a work bag.

The (Stylish) Pragmatist: "The messenger bag," he says, "because it's slim, chic and you can put a lot in it, since they come in various sizes -- they can fit a small laptop, legal pads or an iPad." To get: Black, caramel or chocolate brown -- preferably in leather, but wool and canvas are also acceptable alternatives.

The Trendsetter: "Go for the satchel," he says. Duffle and messenger bags are just fine, he adds, but the arts students have had it right all along."Today's satchels are very stylish, and the hardware they use on them lately is very nice -- brass, silver hardware. They're plenty sturdy and durable."