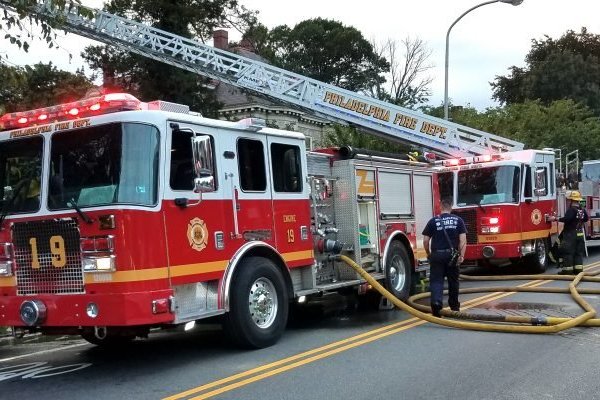 Firefighters responded to a fire in the Logan section of Philadelphia early Tuesday morning. At least 12 were injured.

At least 12 people were injured in a Tuesday morning house fire in the Logan section of Philadelphia. Two remain in critical condition.

Flames broke out around 4:30 a.m. on the 4900 block of North 12th Street. Firefighters said many of the people inside the three-story building suffered injuries from jumping out of windows or from smoke inhalation. CBS reported a 12-year-old boy, who suffered burns to 30% of his body, jumped from a third-story window to escape the home.

Two people reportedly are in critical condition, according to the AP, and a child as young as 3 years old was inside the house when the blaze began, according to CBS.

Firefighters said it's still unclear how many people lived in the building.

Officials are still working to determine how the fire started.

Fire Marshal just arrived at the scene of a massive fire in Philadelphia’s Logan neighborhood. The fire sent 12 people to the hospital, according to officials. pic.twitter.com/LhorMdCiVK

#BREAKING: 12 people hospitalized after fire rips thru 3 story home at 12th & Ruscomb St in Logan. 2 in critical condition, including 1 child. Victims were rescued, some jumped. 1 ambulance crew rushed victims to hosp, then went back to scene to help more victims.@NBCPhiladelphia pic.twitter.com/NYwKcXqg5U