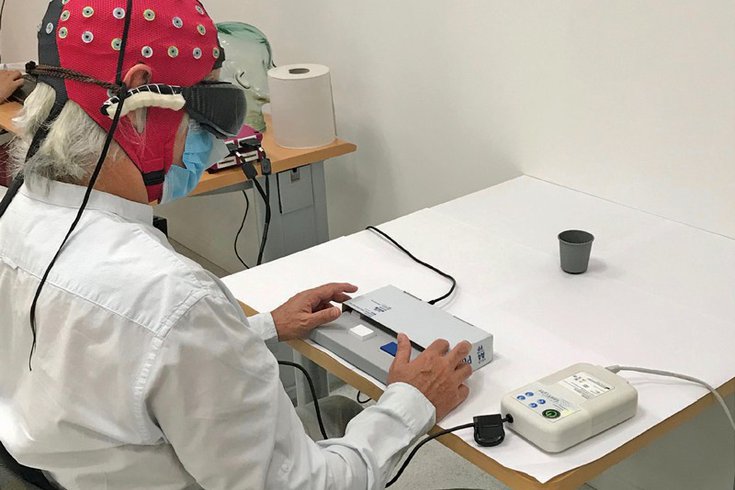 A major step forward in research to treat blindness was achieved by a scientist at the University of Pittsburgh and his colleagues in Europe. Their optogenetic therapy method uses image-enhancing goggles and proteins delivered to cells in the eye to restore light sensitivity.

A French man who has been completely blind for nearly 40 years can now process some visual information with the aid of a therapeutic technology developed by researchers at the University of Pittsburgh.

The breakthrough marks the first-ever case of partial vision recovery in a blind patient.

The pioneering research, published this week in the journal Nature Medicine, relies on an experimental method known as optogenetic therapy. Pitt scientists worked together with colleagues in Switzerland and France to demonstrate the approach on the 58-year-old patient, who suffers from the progressive neurodegenerative disease retinitis pigmentosa.

"I hope it will be a major breakthrough,” said José-Alain Sahel, chair of ophthalmology at the University of Pittsburgh and director of the UPMC Eye Center. "This paper is a culmination of more than 12 years of work, and I am very pleased to have contributed to this effort with Botond Roska in Basel and all my colleagues at Institut de la Vision in Paris."

Retinitis pigmentosa destroys light-sensitive cells in the retina, which normally help transmit nerve impulses through the optic nerve to the brain to form the images we see. The disease causes mutations in more than 71 different genes, making most gene therapy approaches impractical and ineffective.

"The eye is a very complex system that allows our vision to adapt to different levels of light," Sahel said. "But complex systems are very fragile — so when vision disappears, there are few treatments left aside from using prosthetics or reactivating remaining cells in the retina."

Instead of fixing all of a patient's mutated genes, optogenetic therapy works by directly activating nerve cells in the retina. It relies on the use of proteins found in glowing algae that change their shape in response to light. This allows photoreceptor cells to detect the flow of light information and transmit signals to nerve endings in the brain.

To make this method work in a clinical setting, scientists had to find a sweet spot in the spectrum of color. The proteins are not sensitive enough to process images from ordinary light, but overly bright and amplified light — such as blue spectrum light — could damage the retina or constrict the pupils.

Researchers landed on using a protein that only senses amber-colored light. By injecting the patient's worse-seeing eye with a virus carrying the amber light proteins, they were able to prime his eye's motion-detecting ganglion cells, which receive the light signals from photoreceptors and send them to the optic nerve and brain.

The last piece of the puzzle was developing a pair of goggles capable of gathering light pixels from the world and transmitting them to the eye as a single wavelength in the amber spectrum. The goggles are equipped with a camera that detects changes in light intensity pixel by pixel, registering them as distinct events. These light events captured by the camera are than projected onto the retina as pulses in real-time.

As The New York Times reported this week, the research team planned to recruit blind volunteers to try their optogenetic therapy prior to the coronavirus pandemic. The belief was that it may take several months before the brain learned to process the information from the goggles.

The pandemic curtailed plans for multiple volunteers and the French patient was the only person to participate in the experimental treatment.

But the results became clear when the research team was able to speak with the patient about changes he experienced and conduct additional tests with him.

"Adjusting to using the glasses takes time," Sahel said. "Initially, the patient didn’t find the glasses very useful, but after a few months, he started to see the white stripes on a crosswalk and after several training sessions was able to recognize other objects, big and small."

In the lab, researchers found that the patient could reach out and touch a notebook, or count objects placed in front of him with relative accuracy. The change in vision is not dramatic and remains limited to a small field of view, with cloudy and fleeting definition, but it represents a leap forward for a concept that could be useful in treating certain forms of blindness.

The next step for optogenetic therapy will be testing on additional volunteers and a larger clinical trial to determine the effectiveness of this new approach. What has long been a scientific model for experimental tests on animals and basic research could become the basis of a groundbreaking method to restore some functional vision to the blind.