Bruce Willis: 'I like making movies here' (in Philly)

In a nod to Bruce Willis, M. Night Shyamalan thanks actor for his many contributions to film 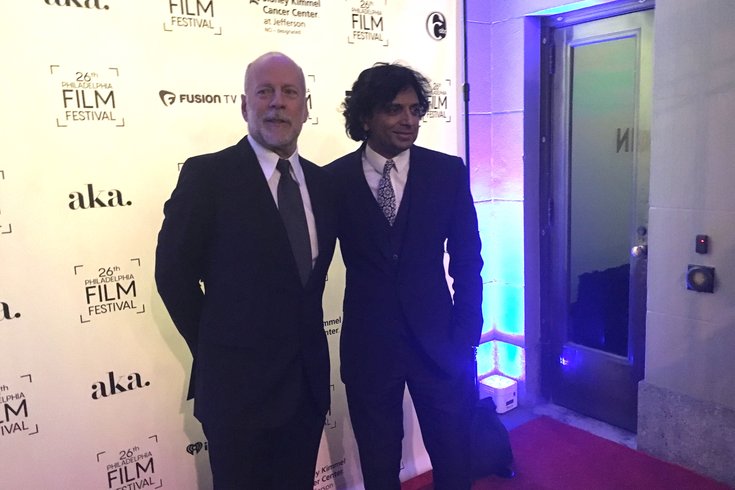 Bruce Willis and M. Night Shyamalan at the Franklin House, where Willis was awarded the 2nd Annual Lumière Award.

In a career spanning four decades, more than 75 movies and an uncommonly long run on the A-list, Bruce Willis has made just four films in Philadelphia, which isn’t far from where he spent the bulk of his childhood in Salem County, N.J. But he’s certainly made them count – they’re all among the most memorable of Willis' career.

There was 1995’s "Twelve Monkeys," in which Willis starred as a convict from the future who tries to save the world from an “apocalypse nut,” played by Philadelphia resident actor David Morse. Then there was 1999’s famed ghost story "The Sixth Sense," the movie that put local favorite son M. Night Shyamalan on the map. In the following year’s "Unbreakable," also directed by Shyamalan, Willis played an indestructible security guard who worked at Franklin Field, a role he reprised in one scene of the director’s "Split," from earlier this year.

Now, with Willis in town to shoot yet another movie with M. Night, he was honored recently for his contributions to film in this city, with an assist from his once and future director.

Willis received the Lumière Award Thursday night at AKA Washington Square at the Franklin House, as part of the 26th annual Philadelphia Film Festival. He was presented with the award by Shyamalan, who was himself the initial recipient of the honor last year. The venue, of course, was a key location in another famous Philadelphia movie – 2012's "Silver Linings Playbook." 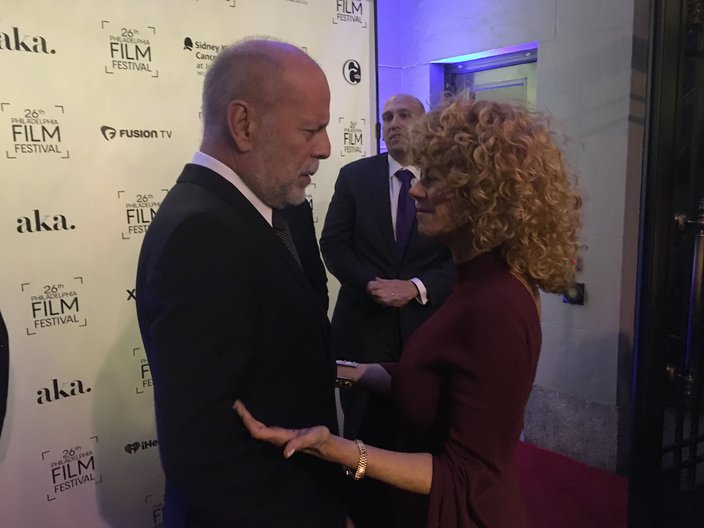 Once inside, Shyamalan introduced his longtime collaborator.

“This is a big deal just to do this for Bruce,” the director said.

He went on to praise Willis for his natural star quality as well as his body of work across multiple genres, while also thanking the actor for treating him well at their first meeting on "The Sixth Sense" – a time when Willis was already famous but Shyamalan was not.

“I like making movies here,” Willis, sporting a beard, said. “I’m really proud of those films.”

The Lumiere Award is meant to honor “those that have demonstrated a passion for the furtherance of the art form and industry of filmmaking in Philadelphia.” It is named for Auguste and Louise Lumière, the French-born brothers who helped pioneer filmmaking technology in the late 19th century. Several other key moments in the evolution of film history, which took place right in Philadelphia, were the subject of a film that played at this year’s festival, "Before Hollywood: Philadelphia and the Invention of Movies."

Other top films at the festival included "Lady Bird," the directorial debut of actress Greta Gerwig, Richard Linklater’s "Last Flag Flying," and director Sean Baker’s "The Florida Project," all of which were billed as centerpiece screenings. You might expect to see a lot of these films in conversation at Oscar time. The festival’s 2015 lineup featured both the actual Best Picture winner, "Moonlight," and the movie that was initially announced as such, "La La Land."

Willis and Shyamalan’s next film is "Glass," a sequel to both "Unbreakable" and "Split." In addition to Willis, the film stars Samuel L. Jackson, James McAvoy, Sarah Paulson and Anna Taylor-Joy, all of whom have been seen around town since filming began at the start of October (Jackson, in fact, was spotted at a film festival screening this week.) The shoot continues in Allentown early next month, and "Glass" will reach theaters Jan. 18, 2019.