The wide receiver signed a contract earlier this month with $20.1 million in guarantees 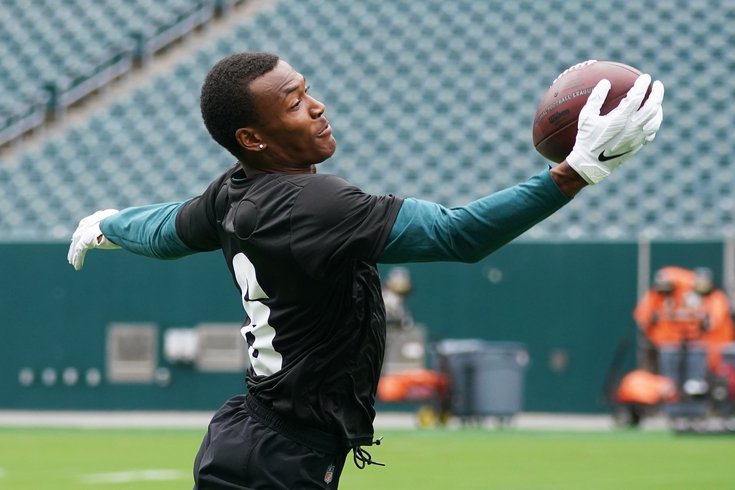 DeVonta Smith makes a one-handed catch during an Eagles practice. Smith was selected with the 10th overall pick in the 2021 NFL Draft.

Philadelphia Eagles rookie wide receiver DeVonta Smith is the most exciting offensive prospect the team has drafted in well over a decade. It's not every year that fans can look forward to the arrival of a Heisman Trophy-winning college superstar who draws comparisons to the likes of Marvin Harrison and Isaac Bruce.

Earlier this month, Smith was among the Eagles rookies to put pen to paper on their first NFL contracts. As a top 10 pick, Smith's deal is worth a reported $20.1 million fully guaranteed, with a fifth-year option for the team.

The first order of business for Smith was purchasing his mother a new home, a heartwarming moment he shared Thursday on Instagram.

Smith has spoken in press conferences about the role that his mother, Christine Smith-Sylve, played in shaping him into the person he is today. Smith-Sylve is a social worker who has spent her professional life navigating difficult family situations in Southeastern Louisiana.

"I think it made me a better son, just because knowing the things that go on in other people's households, I just didn't want to put my mom in a situation like that," Smith said.

Smith's upbringing was detailed last month by retiring Inquirer sports columnist Les Bowen, who spoke with Smith-Sylve about the lessons she tried to instill as a parent.

"I would always tell him, 'We don't have a lot. But what we do have, we value it, and some people are not fortunate [enough] to have what you have.' We don't live the luxury lifestyle, but what we did have, I worked hard for, and we took care of it, and we never went without."

It's not clear where Smith purchased the home for his mother, but it looks like a place where she'll be comfortable for years to come.

As for Smith, he's said his focus remains on football and that the lifestyle of a highly-paid athlete is not what motivates him at this point.

"Just put it in the bank, that’s about it," Smith said at a recent press conference. "This is what I've been working for, but ultimately I'm not done. I'm not playing this just to get one contract, I expect to get many more contracts coming. But ultimately it just comes down to me working. If I keep working the way I've been working and handle my business, then that time will come."