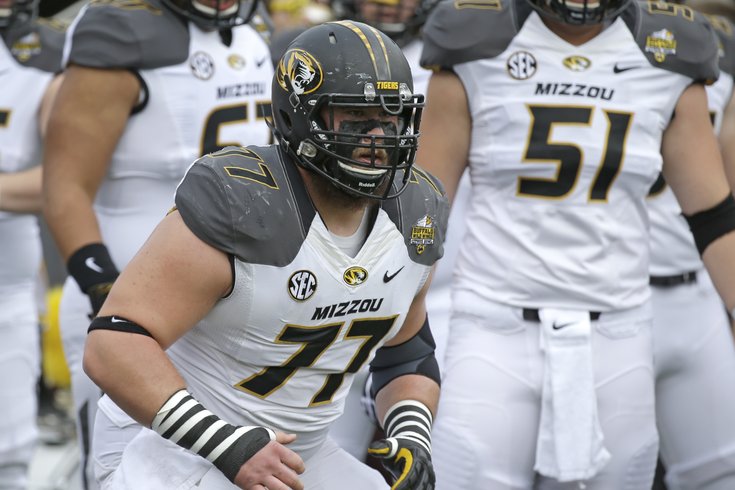 While not as important as offensive tackle or quarterback, the guard spot was probably the most glaring hole on the Eagles' roster heading into the offseason. Last season, opposing interior defensive linemen like Gerald McCoy and Ndamukong Suh wrecked games because the Eagles' OL interior was glaringly over-matched.

The Eagles' addition of Brandon Brooks in free agency may have been their most important short-term signing. He'll give them stability as well as a massive run blocker at RG. The Eagles also added former Raiders and Jaguars OG/C Stefen Wisniewski, who gives the Eagles a fall-back starter at LG if they don't find an immediate starter in the draft, as well as depth at center. However, it appears that Wisniewski could be little more than a one year band-aid.

While they are in a far better position heading into the 2016 season than they were a year ago, the Eagles must add young talent and depth to an offensive line they have ignored in the draft far too long.

Here are five guards and/or centers who may make sense for the Eagles:

Garnett has over 40 games of experience playing for Stanford at guard. He is not the most athletic guy, but when he gets to the second level he looks to put defenders on the ground. One thing the Eagles lack along their interior offensive line is someone who can move a defensive lineman off the line of scrimmage against their will. That's Garnett. He will not come with a high ceiling, but he should have a high floor. Garnett could be a steady player who may be able to step in and play from Day 1, although he is unlikely to fall to the third round.

Dahl is an offensive lineman with positional versatility. At Washington State, Dahl played both at guard and tackle. He'll almost certainly move back to guard in the pros.

While Dahl does not have great athleticism, he's a good "try hard" player. For example, if you care enough, watch his game against Oregon this year. At the 0:22 mark, watch him miss the block on a linebacker in space, and then come back and bury him, opening up room for his back to run. Meanwhile, he held up well going up against a potential top 10 overall pick in DeForest Buckner. You'll also see just how pass-heavy the Cougars' offense was, so Dahl has more than his share of reps in pass protection working as a blind-side blocker.

Tuerk is a great fit for the Eagles for his versatility. His primary position before he went down with an ACL tear last season was at center, but he has also played left tackle, left guard and right tackle. He's a rare player you can plug in to play all five positions along the offensive line.

At the center position for the Eagles, Jason Kelce has rare athleticism, but he has had a disappointing follow-up to his first Pro Bowl season in 2014. He tore his ACL in 2012, and he missed a chunk of last season after having surgery for a hernia. Kelce returned from both injuries in impressive fashion, so it's too early to call him injury prone, or injury-damaged. The worst case scenario is that Tuerk could serve as a backup both at center and other spots along the OL. The best case scenario is that he earns a starting job somewhere else along the line, perhaps at guard.

Boehm's Combine spider chart is awful. Here's how Boehm compares to centers competing at the Combine since 1999.

Boehm's 10-yard dash of 1.91 seconds is atrocious. He is not going to remind anyone of Kelce. However, what Boehm does is move defensive linemen off the line of scrimmage against their will, which is a rare trait for centers in the NFL these days. He also played 52 consecutive games at Missouri, both at LG and C, which means he'll play through pain, and he is regarded as a very smart player.

In 2015, Seumalo played RG and LT. Like Tuerk above, he is a unique player who can play all five spots along the offensive line. Noting a pattern here?

Medical checks will be of particular importance to Seumalo.