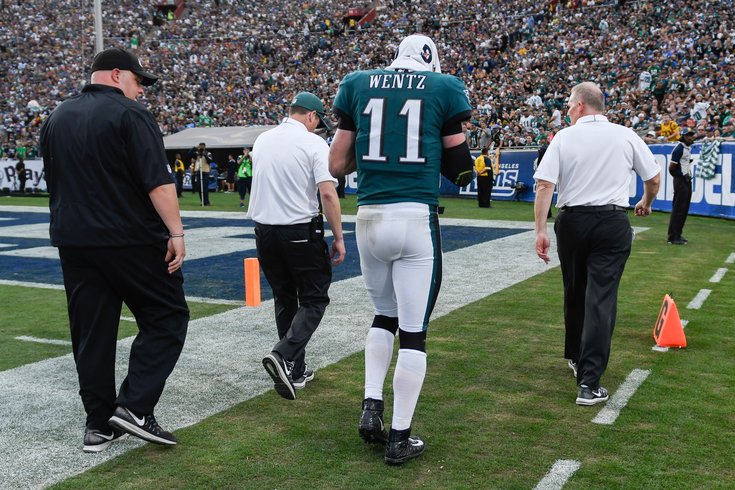 UPDATE [Saturday, 12:45 p.m.] — Carson Wentz has officially been ruled out for Sunday night's game against the Rams and Nick Foles will start in his place.

Update: QB Wentz (back) has been ruled out. https://t.co/tZTbAq0Eov

This week, the Philadelphia Eagles have placed three more players on injured reserve, and a fourth, Carson Wentz, now has a fractured vertebra, and the team is pretending as is there's any chance in hell that he's playing on Sunday. So, you know, just another week in this wretched 2018 Eagles season.

• LB Jordan Hicks (calf): Hicks is out, and the Eagles' top two remaining linebackers -- Nigel Bradham and Kamu Grugier-Hill -- don't have full usage of one (each) of their hands against one of the best running backs in the NFL.

• DT Timmy Jernigan (back): Jernigan played 20 snaps against the Giants three weeks ago, but he had some back spasms flare up on him prior to the Eagles' win over the Redskins, and did not play, despite being on the active 46 for the game. He missed last Sunday against Dallas as well, and will not play against the Rams.

• CB Sidney Jones (hamstring): Jones has suffered several setbacks this season to a hamstring that has never really gotten better.

• LG Isaac Seumalo (pectoral): Seumalo was injured against the Cowboys, and Stefen Wisniewski filled in at LG. Wis will almost certainly start on Sunday in Los Angeles, and he'll have his hands full with Aaron Donald.

• QB Carson Wentz (back): It's laughable that the Eagles are going through the charade of pretending that Wentz has a chance in hell of playing in this game, and it's downright stupid to make the most important individual in the organization sit on a pair of six hour flights when the best thing for him is to rest his back.

• DE Michael Bennett (foot): Bennett has been the Eagles' most productive edge rusher this season, as he has collected 8 sacks and 2 forced fumbles. Bennett played through some pain against the Giants, Redskins, and Dallas, it is expected that he'll do the same in L.A.

• CB Avonte Maddox (ankle, knee): Maddox was targeting Dallas as his return date, but he was not yet ready to play. To be determined if he'll be a go against the Rams. The Eagles remain paper thin at cornerback.

• WR Shelton Gibson (wrist): New addition to the injury report, not that the Eagles use him on offense.

• S Rodney McLeod (IR): McLeod is done for the season after tearing his MCL during the Eagles' win over the Indianapolis Colts. On the season, he had 10 tackles and four pass breakups, which doesn't properly convey the positive contributions he made in the first three games. McLeod was replaced initially by Corey Graham, and later Avonte Maddox.

• WR Mike Wallace (IR): Wallace, formerly the Eagles' No. 2 receiver, broke his fibula against the Buccaneers. Doug Pederson noted that Wallace is doing well, but he is not yet ready to return.

• WR Mack Hollins (IR): The Eagles will also be without their No. 4 receiver, as the Eagles placed Hollins on IR with a groin injury. Like Wallace, Hollins is not yet ready to return.

• OT Jordan Mailata (IR): Mailata's IR designation came as a surprise. It would have been nice to get a look at him in a potentially meaningless Week 17 game, but that won't be happening.

• DT Morgan Fox (IR): Fox is the guy who hit Wentz's leg on the play he tore his ACL and LCL. Fox himself now has an ACL tear of his own.