Why I gave up on the gun-control war 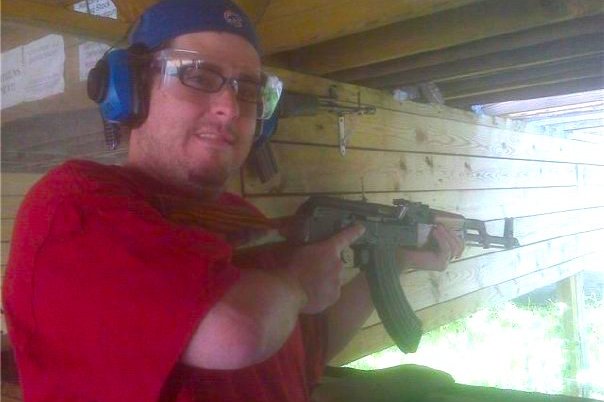 The writer pictured at the range the one time he's fired guns in his life.

Eight Augusts past, I spent a few Saturday afternoon hours shootin’ guns. Really, really big guns. That faux-snarling picture atop this post came from that bachelor party pit-stop day at a range in the Poconos.

Here’s what I remember from the experience: Feeling propped up by a sense of bad-ass invincibility. And here’s something I remember thinking while pulling away: Nope. Still never going to own a gun.

A lot’s happened in the years since, most notably that America’s seemingly gotten more paranoid and less sane by the day. At the heart of that devolution? You got it: Guns.

Specifically, a gun-control “debate” that’s not really a debate at all, but a perpetually uncivil discussion between sides that – staunch in their framing along moral lines – will never find the common ground the world itself wished they would, or even marginally could.

On one side, we have defenders of 27 words written 226 years ago propped up by lobbyist-provided financial invincibility; on the other, defenders of codifying common-sense societal evolution propped up by tragically unnecessary body counts.

If this battle were a boxing ring, one corner couldn’t see the other because it’s on the other side of horizon line.

All the sound-bite creating newspaper covers, social-media public-shaming efforts, stand-up skits that cut through the nonsense, stories of survival and crime-scene photos anyone can muster won’t overcome the fact that 'Merica’s collective legislative community has continually chosen inertia over the risk of infuriating one side or the other.

When sympathetic hearts brawl with self-preservation streaks, the latter wins more often than not in the political world. Logic is a casualty. Bodies continually piling atop bodies become “thoughts and prayers” afterthoughts because everybody damn well knows that while the datelines and victims names will change, inevitability won’t relent.

Because of Charlotte Bacon. And Daniel Barden. And Olivia Engel. And Josephine Gay. And Ana Marquez-Greene. And Dylan Hockley. And Madeline Hsu. And Catherine Hubbard. And Chase Kowalski. And Jesse Lewis. And James Mattioli. And Grace Audrey McDonnell. And Emilie Parker. And Jack Pinto. And Noah Pozner. And Caroline Previdi. And Jessica Rekos. And Avielle Richman. And Benjamin Wheeler. And Allison Wyatt.

Those are the names of the 6- and 7-year-old children slaughtered at Sandy Hook Elementary School in Newtown, Connecticut.

By the time I get done reading the first name in that list, tears already cloud my vision. Sure, part of that might be a natural paternal reaction to seeing young, innocent, life-fully-ahead-of-them children dying unnecessarily.

When I think back to that darkest of American days, I recall sighing in despair with the hope that this is finally the thing that will bring about change.

That Americans will unite during a tragedy like when those planes flew into buildings 11 years earlier.

That 20 children will never die in vain in our country.

How wrong I was.

It wasn’t even the NRA rising through green pond scum and saying that first-grade teachers should have guns in their desks, or the conspiratorially minded imbeciles waving their false flags.

It was the fact that Sandy Hook seemingly deepened the divides between the sides to what I see as impassible depths.

Try as I might to ditch it, I’ve carried that numbness for nearly three years and don’t see it going away anytime soon. Never been much of a quitter, but today, I take pity on anyone who thinks San Bernardino will make a difference, even if police inexplicably are letting the media broadcast live from the terroristic shooters’ bathroom.

This will be forgotten next week.

And the mass shooting that happens next week will be forgotten by Christmas Eve.

Each side has an answer, with varying levels of validity, for every talking point presented by the other. That’s not going to change. And the visceral reaction it prompts will never soften.

The only thing that can break that cycle is compassion overpowering politics. So, let's let this column make that exact transition away from the hopelessness of the previous 750-ish words and into the newsiness of Thursday’s U.S. Senate vote rejecting gun-control measures while the California victims’ bodies were still somewhat warm.

Considering how the seat of U.S. Sen. Pat Toomey (R) is one that could swing control of the Senate next year, it’s a big topic of discussion locally.

For his part, Toomey backed the bill he co-sponsored and was reinvigorated by the other party this week. Translation: He swam against the knee-jerk party tide, up until the point where he voted against barring suspected terrorists on the federal no-fly list from buying guns.

"I recognize that enhanced background checks are not going to stop all mass shootings,” he said in a statement after the vote. “As we have seen, many of these attacks would still have happened even if our proposal was on the books. But some tragedies, such as the mass shooting at Virginia Tech in 2007, might have been prevented. And if there's a sensible way to help keep the American people safer, I believe it deserves our support."

With the quickness, three Democrats seeking to replace him had much to say when I reached out and sought comment. What follows are their responses:

From Sabrina Singh, communications director for the Katie McGinty campaign:

"Katie McGinty would have led the effort to pass commonsense gun control legislation, rather than playing political games like Sen. Toomey. Let's not forget: Toomey voted against a bill that would have prevented individuals who are on terror watch lists from being allowed to purchase firearms. It was a clear choice that would have made our nation safer and Senator Toomey failed.”

“Admiral Sestak would have voted in favor of background checks. ... Sen. Toomey has repeatedly claimed he has been 'looking for opportunities' to reintroduce his bill. Two years later, he hasn't, either because he lacked the courage to simply reintroduce it or because his true conviction remains the same as when he said 'my idea of gun control is a steady aim.'"

And a statement from candidate John Fetterman:

"It's shameful and hypocritical that Pat Toomey would cave to pressure from the NRA when faced with a vote that would prevent the sale of guns to suspected terrorists. Why does Pat Toomey think a person on the terror watch list should be able to buy an AR-15?"

Toomey’s spokesman asked for the chance respond to the others’ comments, and after an off-the-record chat about the frustrations I've expressed herein, he emailed a quote back:

"The comments from the McGinty and Sestak campaigns represent the very worst in political campaigns. Instead of commending the actions Senator Toomey took to try and make Pennsylvania a safer place to live and raise a family, they chose to promote their own political aspirations."

In the meantime, what it all comes down to is this: America is a dangerous place, but I'm still not going to jump on the gun-ownin' bandwagon.

Yeah, if I did, I'd be one of those mystical "good guys with a gun," but by arming myself out of fear and a need to feel tougher and/or safer, I'd also be part of the problem. That's not a chance I'm willing to take.

I will ask this: If you have a pep talk that'd get me re-engaged, by all means, share it in the comments.