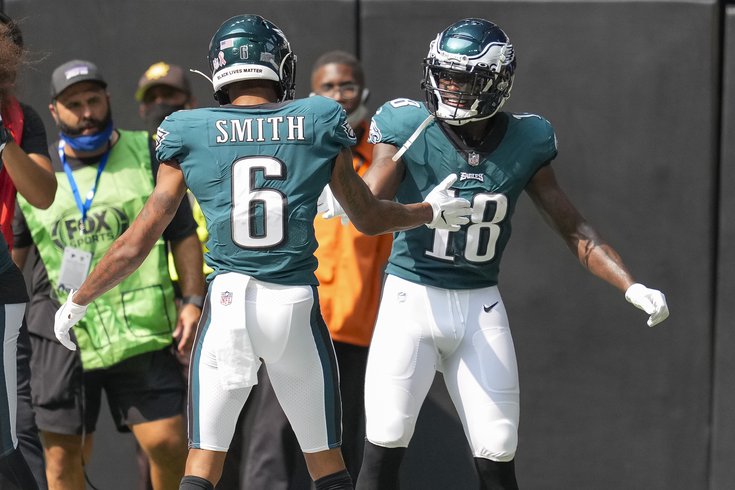 The vibes are positive.

The Nick Sirianni era is off to a blazing start, as the Philadelphia Eagles dominated the Atlanta Falcons in their Week 1 opener, with a final score of 32-6. As always, win, lose, or tie, we hand out 10 awards.

The consensus belief is that Jalen Hurts has one season to prove beyond a doubt that he is "the guy" at quarterback for the Eagles, and that if he doesn't, the team will either trade for a star vet or select a quarterback with their abundance of high picks in the 2022 NFL Draft. It's almost sort of unfair pressure to put on a second-year player, when there are other young quarterbacks who have the luxury of showing over several years that they can be the face of the franchise.

Hurts still has a long way to go to definitively stake his claim in Philadelphia, but he's off to one hell of a start. On the day, he was 27 of 35 for 264 yards, 3 TDs, 0 INTs, and QB rating of 126.4. He also ran 7 times for 62 yards. He showed complete command of the offense, and while his accuracy wasn't perfect at times, he made his share of bigtime throws, the best of which, in my opinion, was this strike on the run to Dallas Goedert for a touchdown.

Two seconds before half... Hurts to Goedert! #FlyEaglesFly

That was a beauty. Eagles fans couldn't have realistically hoped for a better Week 1 debut out of Hurts.

There were some who were worried about what kind of game plans Nick Sirianni would devise in the regular season, after his vanilla approach to the preseason. Sirianni didn't want to give anything away during the summer, and rightfully so. Why show what you're going to do when you're a new head coach and first-time play caller, when you can preserve some mystery?

On Sunday, Sirianni was masterful in mixing personnel packages, as well as balancing the run game, the passing game, and the screen game. Receivers were open, there were wide running lanes, and for the first time in years, screen passes didn't result in the quarterback throwing the ball into the dirt.

3) The 'Juice' Award 🧃: Miles Sanders and the Eagles rushing attack

In the first quarter, Miles Sanders looked hesitant at times to get north-south on his runs, sort of like he did early on in his rookie season. On some of those early runs, he left some meat on the bone, where there were yards to be gained. However, he quickly corrected that, and looked explosive when he got his opportunities.

As noted above, Hurts had 62 yards on the ground, while Sanders had 74, and Kenny Gainwell chipped in with 37 and a TD. The Eagles finished with 173 on the ground for the day. They have a realistic chance to lead the NFL in rushing offense this season behind the trio of Sanders, Hurts, and Gainwell.

The Eagles' screen game was atrocious in 2020, and really, it hasn't been much of a weapon in recent seasons beyond just 2020. Part of that in 2020 was because the Eagles had 14 different starting offensive line combinations. It's hard to execute the screen game when all five offensive linemen aren't on the same page.

On Sunday, the Eagles' effectively ran screens to the wide receivers, the tight ends, and to the running backs. It was all working, and without having watched the tape yet, you can bet that having the starting five along the O-line was a big reason why.

The highlight play in the screen game was the "nail on the coffin" Jalen Reagor TD, during which Jordan Mailata nearly killed a guy.

"It's a process," Mailata said about that block above. "Every time you have to be perfect. Know the snap count first, then the timing of the screen, and then just beelining it and burying someone."

Oh hey, DeVonta Smith did some stuff, too. He finished with 6 catches for 71 yards, and his first career TD, which came on the Eagles' first drive of the season. Asked when he knew he had a TD on this play, Smith said, "When I saw it was man [coverage]." A look:

Smith's quote might sound brash, but he was really just being honest. As you can see in the video above, Smith is in the slot, and he's running a rub route to the outside. In man coverage, the corner really doesn't have a chance if the quarterback can make a good throw.

I think Smith's quote was more of a nod to the confidence he had in Hurts putting the ball on him than it was some sort of self-promotion. He's just a savvy kid who could very well be a great player.

MORE: The good, bad and ugly from the first half of Eagles-Falcons

6) The 'Don't Forget About Us' Award 🛑: The Eagles defense

In the first quarter, the Eagles defense struggled tackling. The Falcons ran the ball effectively, and Matt Ryan was efficient throwing the football. However, in two early trips into the red zone, the Eagles' defense tightened up and held Atlanta to a pair of field goals.

Thereafter, the Eagles shut down the Falcons' offense.

7) The 'Don't Forget about Us, Either' Award ✋: The Eagles' special teams units

The Eagles won this game in all three phases, including special teams. Arryn Siposs had a great punting debut, Jake Elliott kicked off well against dangerous kick returner Cordarrelle Patterson, and the coverage units held Atlanta to minimal returns.

8) The 'Frontrunner' Award 📈: The Eagles, in the NFC East

As you saw on Thursday night, the Cowboys lost to the Buccaneers. On Sunday, Washington lost a home game to the Chargers. And as I type this, the Broncos just took a 17-7 lead over the Giants. By the end of the day, the Eagles could be sitting alone atop the NFC East:

Update: The Giants lost too.

9) The '#EaglesDraftPickWatch' Award 👀: The Colts

Anyway, Wentz played the whole game, and the Colts lost. That's the best outcome for now. And even better, the excuse-making for Wentz has begun in Indy.

This wasn't on the QB. O-line didn't get it done. Period.

Yep, it's always someone else's fault.

I was impressed by the turnout of Eagles fans for a road game following a 4-11-1 season. In the fourth quarter, the only fans left in the stadium were wearing green.

Lincoln Financial Field is going to be rocking next Sunday in the first full-capacity home game since the start of the pandemic.