Heading WABAC: Sherman, Mr. Peabody and Hazel are having a revival 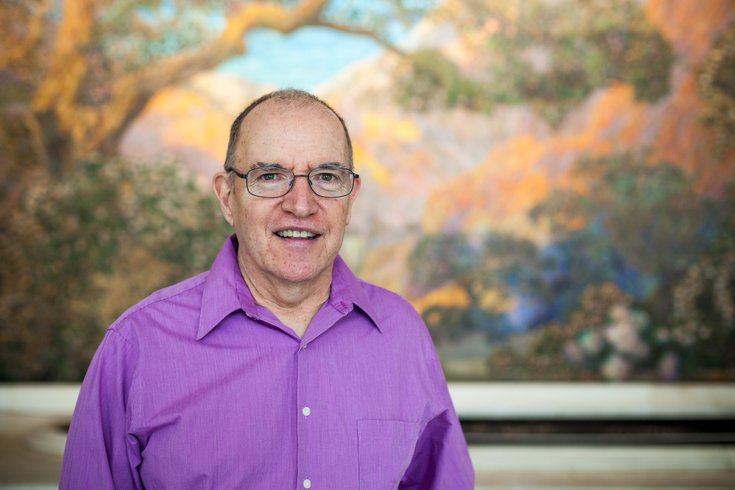 Peter Key, son of Ted Key stands in front of "The Dream Garden" mosaic in the atrium of the Curtis Center.

It’s as if the WABAC machine was working.

Hazel – the bossy maid who began as a cartoon panel for the “Saturday Evening Post” in Philadelphia, became a TV show, was featured in books and continues even now as a newspaper comic – is back as a musical.

And Sherman, a nerdy boy adopted by a genius beagle named Mr. Peabody, who time traveled through history via the imaginary WABAC time machine as part of the Rocky and Bullwinkle television franchise, are back, too.

The duo revived first with a full-length movie in 2014, and now in a Netflix cartoon series that began last year.

While the creator of those characters, longtime Valley Forge resident Ted Key died in 2008, his son Peter is carrying the torch for his dad’s legacy.

Hazel, Sherman and Mr. Peabody are all Philadelphians.

A retired journalist who once worked a few years for his dad writing gags for Hazel cartoon panels, the 63-year-old Lansdowne, Delaware County, resident is organizing and cataloging his dad’s works.

He was instrumental in signing off on plans to make Hazel into a musical, a concept that had kicked around for decades.

With the blessing of the Key estate, the new show is hoping to attract investors to take the show elsewhere, perhaps Broadway, Peter Key said. The musical is currently running at the Drury Lane Theatre in Oakbrook Terrace, near Chicago, through May 29.

The theater piece, “Hazel: A Musical Maid in America,” begins with Ted Key’s best-known creation making an appearance from the rear of the theater, wading through the audience, giving orders – just as she did from the beginning in 1943, when Hazel debuted in the Curtis Publishing magazine.

In a nod to his father’s legacy and roots, Peter Key drove to town last week for an interview with PhillyVoice at the Curtis Center, where the “Post” was headquartered and also where some of this website's editorial offices are located.

As a fixture in the “Post,” Hazel's run in the magazine lasted until 1969 when Curtis filed for bankruptcy. Even afterward, Ted Key continued drawing the character until 1993.

Hazel was also the title character played by actress Shirley Booth in a situation comedy that ran from 1961 to 1966, earning Booth two Emmy awards. The show is back on the air of the nostalgia-oriented network, Antennae TV.

Key said his dad “found humor in everything,” setting a radio play he wrote in a urology clinic. As a boy growing up in Fresno, California, it was clear that the child who drew in the dirt with a stick wanted to be a cartoonist.

And while Ted Key spent some years in New York selling cartoons – even later in his career he went to New York once a week to pitch other cartoons to different magazines -- the Army transferred him to Philadelphia, where he remained the rest of his life.

Which means Hazel, Sherman and Mr. Peabody are all Philadelphians.

Growing up, Peter Key had a woman – a registered nurse – who acted as the Key's housekeeper. She was not at all like Hazel, though.

Ted Key created the characters that became Peabody and Sherman at the behest of his brother, Len Key, who worked in TV.

The two characters came from storyboard Key did for Jay Ward, the crazed genius behind Rocky and Bullwinkle, and while Ted Key did not work on the television show, he was one of the copyright holders for the two characters.

“The concept is so insane. A brilliant dog – he barks in six or seven languages – adopts a boy and they travel through time," said Peter Key. "It is so wild it appeals to everyone."

While the Key estate no longer has a financial interest in Peabody and Sherman, Ted Key is still credited in the recent film and new TV series for his role in creating the characters.

One of three brothers and the only one who worked with his father, Peter Key said he’s made a point of organizing information about his father’s creations because, “If I didn’t, no one would have.”

“The amount he created is absolutely insane,” Key said of his father.

And it goes WABAC.