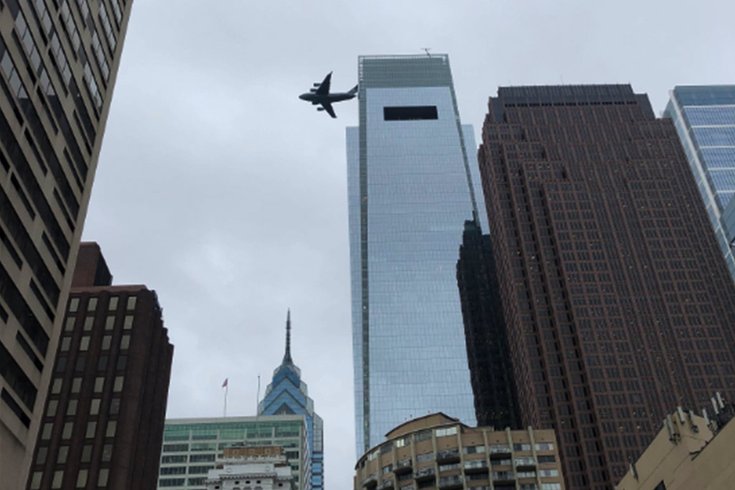 A C-17 Globemaster III was seen flying over Center City Philadelphia on Friday morning, to the alarm of some on social media. The large military transport plan was part of the 'Salute the Military' event broadcast on FOX29s 'Good Day Philadelphia."

If you were outside in Center City during rush hour on Friday morning, chances are you may have seen – and may have been terrified by – a low-flying military plane thundering in the skies above Philadelphia.

Some on social media captured footage of how the plane looked from the street, and, well, the view was a doozy.

So far, the unusual sight has spawned two Reddit threads. This one:

And this one from out in Delco:

Turns out the plane was one part of the Salute the Military event organized by FOX29's "Good Day Philadelphia." The event coincides with National POW/MIA Recognition Day 2018. The network closed down the 300 block of Market Street in honor of the country's service men and women, encouraging vets and vets' family members to share photos online with #Fox29Salutes.

To those who have served and still serve today... THANK YOU #fox29salutes pic.twitter.com/ApvVfS0ZL4

Did you see that!! A US Air Force C-17 flying over Market Street #FOX29SALUTES pic.twitter.com/my9U4HvtNL

Christian DeLuca, a spokesman for the 514th Air Mobility Wing at McGuire Air Force Base in Burlington County, confirmed the plane was a C-17 Globemaster III, a large military transport plane about 175 feet long with a wingspan of 170 feet.

He said the Friday morning flight over Philadelphia may have been louder than in past years.

"It was our flight crew that was flying the C-17 over Philadelphia for the salute to the troops," he told PhillyVoice. "We were flying in at about 1,500 feet. Because of the low (cloud) ceiling, our air crew said it might have made it seem like they were flying a little bit lower.

"The plane was louder than it was last year," he said, "and that's because they slowed down so people would have a bit of a longer look."

The flyover was coordinated with the Federal Aviation Administration, according to an agency spokeswoman.

FOX29 did not return a call for comment on the social media reaction.