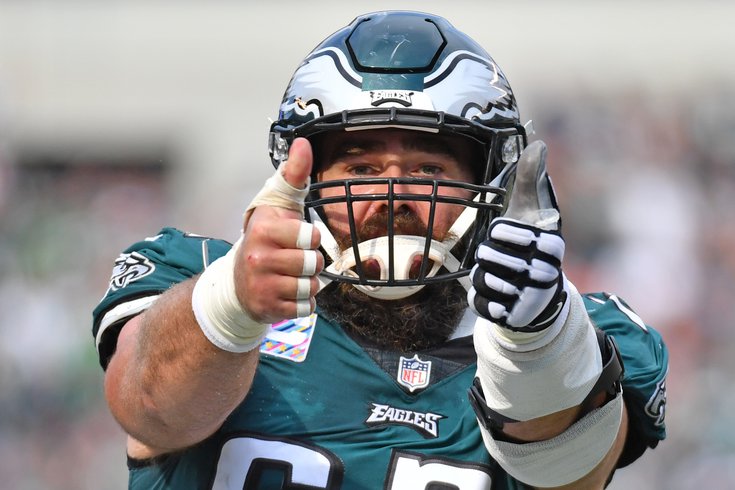 Philadelphia Eagles center Jason Kelce believes 'a lack of accountability' is the root cause of the criticism 76ers star Ben Simmons has faced during his time in the city.

Jason Kelce has settled in nicely to the role of elder statesman in Philadelphia sports, a beloved leader and Super Bowl champion who has the authority to speak about the city's culture from the standpoint of a professional athlete.

The Eagles veteran doesn't understand why playing in Philly is so difficult for some athletes to grasp. He's not impressed with the way Sixers holdout Ben Simmons has chosen to handle the heavy criticism he's faced here after a series of playoff failures and and his apparent unwillingness to build on his repertoire of skills.

Eytan Shander: The time is now to trade Ben Simmons, and here's why

During his press availability on Thursday, Kelce was asked about Simmons and the larger challenges of playing in such an intense sports market. In Kelce's view, Simmons simply hasn't done what it takes to improve as a player and earn the admiration of the fanbase, whether the team reaches its ultimate goals or not.

"Everybody can bitch and complain about how tough this city is to play in," Kelce said. "Just play better, man; this city will love you."

Jason Kelce on accountability and the Ben Simmons situation: pic.twitter.com/SH97yo2taL

"You write your own narrative," Kelce said. "I don't want to crush any other player. But what's going on with the 76ers and Ben Simmons, something like that, all of that is because of a lack of accountability, a lack of owning up to mistakes and a lack of correcting this. If all of that got corrected — if you're fixing free throws and getting better as a player — (then) none of this is happening."

Kelce added that he hasn't found it hard to play in Philadelphia.

"I think it's pretty f***ing easy, to be honest with you," Kelce said. "You go out there and play hard. Want to be loved in this city as a baseball player? Run to first base. They're going to f***ing loving you."

Simmons missed the Sixers' season-opening victory in New Orleans on Wednesday night after he was suspended for conduct detrimental to the team. He had reportedly refused to participate in drills during practice and has largely appeared disengaged since returning from an offseason holdout, which began with a trade request that the Sixers haven't yet seen through as the wait for the right offer. .

It's anyone's guess where this standoff will go next, but it's certainly not looking good right now for Simmons to rejoin the Sixers lineup or change his mind about a future in Philadelphia. Changing the city's mind about him becomes harder to fathom with each passing day and new development.