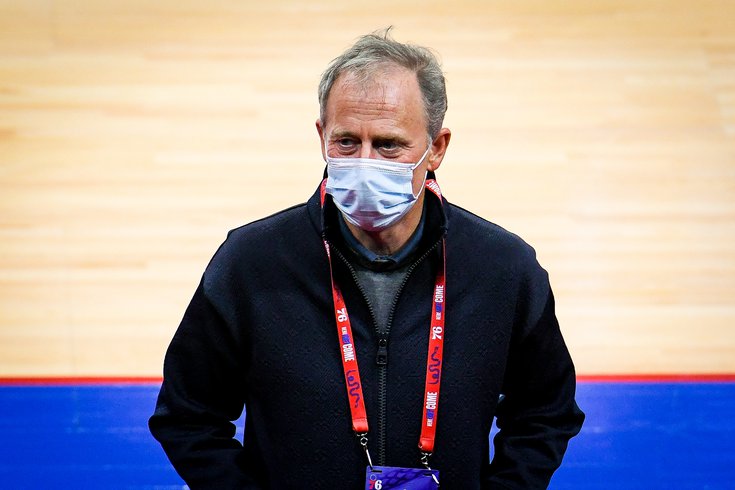 PHILADELPHIA, PA- JANUARY 04: Philadelphia 76ers owner Josh Harris stands on the sideline during the game against the Charlotte Hornets at Wells Fargo Center on January 04, 2021 in Philadelphia, Pennsylvania.

Harris Blitzer Sports & Entertainment, the ownership group in charge of the Sixers, always seems to find themselves in the mix when a new sports franchise comes on the market. It's a reflection of what they already have in the fold between the Sixers and New Jersey Devils — two franchises with conflicting fanbases — but also their continued interest in adding to their portfolio if the right opportunity comes along.

There is no bigger game in town than the NFL, and a report from NBC Sports' JP Finlay on Monday characterized Joshua Harris as one of the frontrunners for a potential purchase of the Washington Commanders:

Early reports suggested he was the front-runner to buy the Commanders, though that no longer seems to be the case. Bezos did not submit an official bid for the Commanders when proposals were due just before Christmas, sources told NBC Sports Washington. Front Office Sports first reported that news. That does not necessarily preclude a Bezos offer from coming in later, though multiple sources said that Dan and Tanya Snyder prefer not to sell their franchise to the Amazon founder.

That leaves Josh Harris, a D.C. native and the owner of the Philadelphia 76ers and New Jersey Devils, as perhaps the top candidate to buy the Commanders. In May, Pro Football Talk reported that a group led by Harris was prepared to pay $5 billion for the Denver Broncos, though the group chose not to enter into a bidding war against the eventual owners the Walton-Penner Group. That group had the backing of the Walmart fortune, and in turn, the Harris group decided to focus on the next potential NFL ownership opportunity. [NBC Sports]

There are obvious connections to make between Harris and the Commanders, with Harris having grown up in Chevy Chase, MD. PhillyVoice spoke to a few sources with knowledge of the situation over the last 12 hours or so. Let's hit some broad points in this discussion as they pertain to both Harris/HBSE's interest in the Commanders and the dynamics of the Commanders sale.

• HBSE has been prominently involved in a few different high-level conversations on team ownership, as Finlay alludes to here. But there is a pretty significant gap between the due diligence, meetings, etc. that took place during the Broncos sale process and what has happened so far with the Commanders.

A source familiar with that process told PhillyVoice that HBSE representatives had extensive sitdown time and meetings with members of the Broncos prior to the Walton family ultimately tabling their bid. They toured Denver's facilities, and met with a number of important members of the organization, including then Broncos President Joe Ellis and members of the coaching staff. HBSE has collected a wealth of data on the Commanders' situation, but the line of dialogue has been nowhere close to the same, with some characterizing the contact as nonexistent.

• The process of the Broncos' sale has partially informed the approach to a potential bid or purchase of the Commanders. The Walton family was largely uninvolved in the bidding process for the Broncos early, with one source telling PhillyVoice that they only offered their bid after HBSE's meetings with the Broncos out in Denver.

That's where Jeff Bezos comes in. One of the richest men in the world, Bezos is viewed in a similar light to the Waltons during the Broncos bidding process, the runaway favorite to come away with the team if he and Daniel Snyder can sort through their personal hang-ups. That's certainly not a foregone conclusion. But Bezos' lack of a bid up to this point, as Finlay mentions in his story, hasn't quelled concerns that he could simply come over the top to get a deal done. As we saw in the Broncos example, Harris and Co. do not want to be used as a catalyst for a bidding war, and they retreated once the Walton offer came in.

(One source added that this process with the Commanders was similar to Steve Cohen's purchase of the Mets, in that there were numerous high-profile bidders but one man was viewed by insiders as the runaway favorite to purchase the team.)

• HBSE absolutely wants to get into the NFL if that hasn't been made clear already. It is the biggest game in town in America. But it's probably fairer to look at this through the eyes of a business looking to add to its portfolio rather than Harris trying to buy the Commanders at all costs.

Looking beyond the NFL, for example, HBSE was on the shortlist of bidders for London-based club Chelsea in the English Premier League, with American businessman Todd Boehly eventually tabling the top bid in that process. Harris and HBSE Co-Founder David Blitzer are already General Partners in Crystal Palace — they'd have to divest about a 20 percent combined share to buy another EPL club — and two of England's most historic clubs, Liverpool and Manchester United, are in the midst of sales processes of their own.

It would certainly be funny if the Commanders end up being the team they land, as it would add another team with regional rivalry ties to the mix. But set the individual team aside, and the major takeaway is that you'll continue hearing stories about HBSE's interest in big franchises until/unless they're able to land another big fish.