The life of an Insta-famous dog 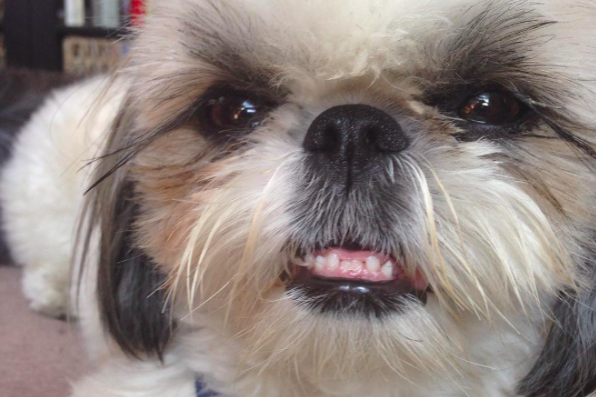 Marshall, a 2-year-old Shih Tzu from Manhattan, has become "Insta-famous" thanks to his clever captions and adorable face.

It's easy to develop a love-hate relationship with Instagram. Between all the humble bragging and careful posturing to present a specific image, the social media outlet can often feel a bit contrived.

Which might be why dogs have become so popular. No matter how much grooming and posing an owner can prepare their canine with, in the end, it's just an innocent animal that makes you double click your screen instead of stopping on the street to scratch their belly.

Enter: The age of the Insta-star dog. We're not talking about a shot of your pet getting more than 100 likes. We're talking about entire accounts dedicated to brand-friendly canines.

Some of these accounts have hundreds of thousands - or even a million - followers. There are endless BuzzFeed articles dedicated to them, and they help sell products for companies like Martha Stewart and Budweiser.

For one New York City couple, what began as a fun, private account to show off their purebred Shih Tzu to close friends and family spawned a minor Internet celebrity.

Marshall, or, marshmallowpup09, who resides on Manhattan's Lower East Side with owners Joanne Tantoco and Brian Clark, has amassed more than 4,000 followers since his account took off in May.

Since Marshall's popularity has increased, Clark and Tantoco have met with plenty of other owners who have created stars out of their pets. In New York, at least, Tantoco swears the community isn't full of "mommy-managers" that you might see on TLC's "Toddlers and Tiaras."

"The best part is most of them are really normal," Tantoco said. "I've talked to other people in other parts of the country. Some are mom-manager types, but the New York ones are laid back."

Some of those dogs have truly reached another level. Just within the Shih Tzu breed, Potato, for example, is another New Yorker with nearly 30,000 followers who endorses products and promotes meetups for fellow dogs (all in the name of charity).

There's Koki, a cinnamon brown pup who poses in front of the Empire State Building each night and proudly supports LGBT rights.

Then, of course, there's Marnie, the Shiz Tzu who casually hangs with the likes of Selena Gomez and Jonah Hill. Marnie has nearly 2 million followers.

Marshall isn't on that level just yet, but his owners say there is a small market for the lesser-known pups. They've received BarkBoxes, which are essentially doggie gift baskets, for featuring the service on the account before.

Tantoco also said they've been offered small deals with local brands to use Marshall as a spokes-dog, so to speak. But they want to keep the account fun, not make followers feel awkward.

"We don't feel comfortable trying to sell them on stuff. But if people ask us where we got a harness or something, we'll promote it."

"For us it's something we want to do for fun, and that's the main focus," Clark added. "If it becomes a job, we'll be like, 'Why are we doing this?'"

To be fair, keeping the account ad-free may not be the only reason Marshall doesn't do more spots. His commentary has a bit of an edge, and he's not afraid to profess his love of butt-sniffing, "motherpuppin' balls" and getting wasted off a few brews.

Clark is the mastermind behind the not-so-politically-correct captions, and he said Marshall's account has irked more than a few people.

One girl, for example, commented on a photo praising his cuteness and saying she wanted to cuddle. Clark, speaking as Marshall, responded as a "player," offering to sniff her butt anytime she wanted.

If someone gets overly offended, they can simply be blocked online. For other dog owners who participate in the same meetups and hang in the same circles, it's not so easy.

"When we're hanging with other dog owners, you can read people and tell they're not really into that," Clark said.

Tantoco's role in the account is partly making sure Clark doesn't go too far over the line. She takes the pictures, but also proofreads Clark's work.

"I try and make sure they're not too offensive."

Marshall's adorable demeanor and somewhat foul mouth have helped him gain notoriety, but Tantoco doesn't think he's aware of his fame - only that people find him cute.

Well, what does Marshall think? We chatted with him about his fame, Instagram habits and more. (Read: We spoke to Clark speaking as Marshall. Dogs, in case you didn't know, cannot talk).

Joanne says you aren’t aware of your celebrity status, but you do know how cute you are. Is that true?

I mean, I know the babes dig me, but I had no idea I was blowin' up outside the hood! You sayin' there are babes in OTHER hoods who want to get with me?! Don't mess with me, man! If you're saying there are more babes out there who want to get with me, then tell me! Dang, I need to start Ubering it to other hoods! I didn't know I was famous! This Lower East Side motherpuppa is movin' on up!

You documented your trip to Philly last year with a series of photos. How did you like the city?

My sniffing game was off the hizzle while I was there! The babes were like, "Oh my Gawd! You so fine! I know I should be taking in the sites, but all I want to do is get with you!" and I was, "Pffft sure thing, baby girl." Man, it happened everywhere we went! I couldn't even get in to see the Liberty Bell! Too many babes! Dang, it's hard being so damn cute, ya know? Well, to answer your question, my favorite spot was the Rocky steps over at the Philadelphia Museum of Art! Running up those steps and impressin' all the babes was the highlight of my trip, yo! All the "Ooooohs" and "Awwwws" comin' at me were louder than a motherpuppa!

Some might say you aren’t as politically correct as other Instagram dogs. What do you have to say to that?

Man, I grew up in the Lower East Side of New York City! Out there, you gotta talk fast and move fast to survive, ya feel me?! I tell it like it is, man! I ain't got time to sprinkle that sugar! Some pups like to play it safe, and I ain't got TIME for THAT!!

Besides posing for the camera, what are your favorite things to do?

I love to sit on my stoop and chat up the babes as they walk by! I love wrestlin' with the fellas! Always good to get in a little exercise! Babes love a guy who exercises! Oh, and more recently, I found out I LOVE the beach! Love the water, the sand, the sun and the BABES!!

What advice would you give to other dogs who want to become Insta-famous?

Pffft! I ain't helpin' them other fools build their street cred! What?! You want me to just HAND that s*** out?! Man, you crazy! You want that information then you best be payin' me, ya hear me?! Like I'm gonna just GIVE that secret away! Like I'm DONE building my brand! Dang, this is ridiculous! Can't believe I'm being asked to share my secrets! Man, this interview is over!

If you're looking to boost the profile of your Instagram pet, there are plenty of local dogs to model your account after. Here are five Philly-area canines to follow immediately:

This Great Dane's nickname is "Tiny." Get it, because Tiny's huge?

Instead of urinating on fire hydrants, Miles majestically stands on top of them, traveling across the country to do so.

Only gripe with Busgy: He doesn't actually have a cat's head on his rear end like the cartoon.

What is Watson good at? Wearing sweaters. Lots and lots of sweaters.