Trans and non-binary performers come out 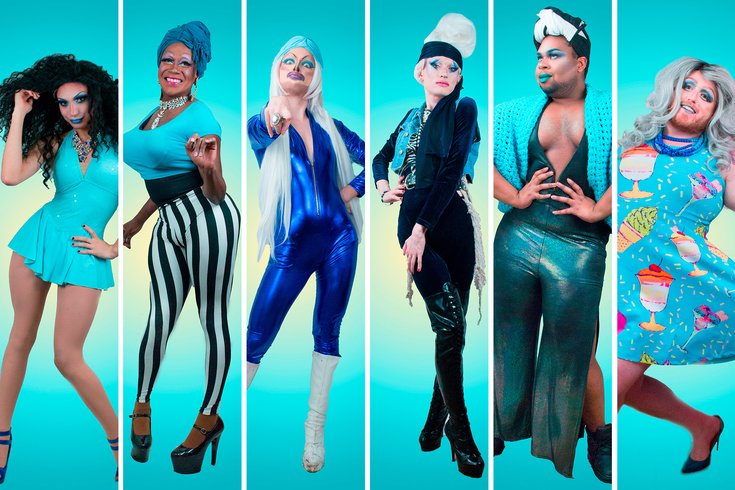 The performers in "Gender Queery: A Trans and Non-binary Drag Show."

A troupe of non-binary and trans performers of color are setting the stage this Friday for a whole new drag experience during Pride Month.

Gender Queery: A Trans and Non-Binary Drag Show at Stir, a lesbian-owned nightclub near Rittenhouse Square, is rethinking many of the most predictable features of traditional drag shows -- men dressing as women and women dressing as men -- with a group of performances artists who identity either as non-binary or transgender.

Icon Ebony-Fierce was first inspired to create this new show as a way to make drag a bit more inclusive for the people she knows on the drag scene.

“We would always have shows where trans people are accepted and be embraced with open arms,” Ebony-Fierce said. “But as far as gender nonconforming and non-binary people, I always noticed that you would still have to conform to a certain standard of drag.”

In truth, most of the drag shows in Philadelphia are still dominated by cis-gender men (mostly gay) who perform as female drag personas either of their own creation or in homage to celebrities like Britney or Beyonce. The image of the quintessential drag show still revolves around the idea of custom gowns, sequins, rhinestones, high heels, high hair, long nails and a generally comic and campy over-the-topness.

But Ebony-Fierce says that there are actually many other ways people are doing drag these days, even if it’s not always being spotlighted at some of the major clubs and performance spaces.

“This event celebrates being femme and not following what the societal standards of being femme means,” says Ebony-Fierce, adding: “It also embraces a diverse array of identities, ethnicities and expressions. Before, you’d have to go to someone’s party in West Philly or Fishtown to find that.”

A radical approach to drag

Drag and performance art has always been a creative, in-your-face way for the LGBT community to break the mold and to stand out in fun, bold and campy ways that challenge straight gender norms. It elevates the political into the performance, while involving music and cultural cues of an era. While drag shows of the past used to be dominated by Liza Minnelli and Judy Garland impressions, the popularity of RuPaul’s Drag Race has led to more experimental characterizations that help poke a little fun at traditional concepts of beauty and gender while delving more into avant-garde performance, choreography and fashion.

“Drag performance is often seen as one binary dressing up as a different binary gender,” which has led to “gatekeeping and thinking of drag in a limited capacity.” -- genderqueer performer Beary Tyler Moore

What makes "Gender Queery" a little different than some of the other drag shows in Philly right now is how it embraces an even bigger “fuck you,” says Ebony-Fierce, to the very notion of gender expression. A non-binary approach is radical to the now non-radical LGBTQ community, they say. 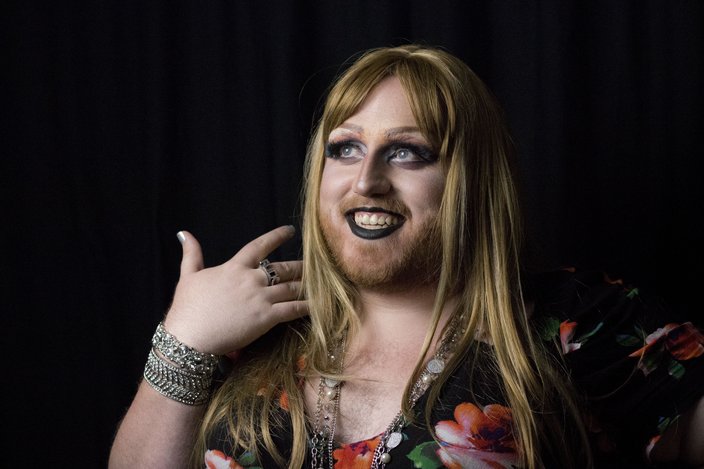 One of the performers in this new show, Sa’Mantha SayTen, is a non-binary trans femme who goes by the pronouns they and she. She says that performers of color and trans artists tend not to thrive in more traditional drag spaces because they don’t always fit what mainstream shows have popularized in drag (hello, Drag Punch at Punchline), some of which are catering to increasingly heterosexual audiences.

In other words, this new approach is a bit like meta-drag, drag about, well, drag.

If it sounds deep, it is, because it’s deeply personal to performers like Paula Deen-White, a non-binary and gender non-conforming artist who’s also in Friday’s show.

“This is important simply because of representation,” says Deen-White. “Exposing others to our varied identities gives them the opportunity to see that, though we are different, we can provide great entertainment. And it helps us to show that our art and identities can work together. I use performance as a way to educate, inform and entertain.”

Out of the trans and non-binary closet

A good rule of thumb at any drag show is to expect the unexpected, but this is especially true when it comes to how we think about gender expression, especially when thoughtfully presented by artists who make a big point of rejecting many of the arguably outdated models of what it means to be either male or female.

Mercury, a trans woman in the show who performs as a drag queen, says, “We want to demolish the barriers that actively seek to obfuscate the locus of trans members in the LGBTQIA community.” In the most obvious way, it means this cast of performers is exclusively trans and non-binary with the goal of delivering a show that promotes “trans euphoria, community and excellence,” she says.

Mercury, whose name was inspired by her love of astrology, says the energy that comes from being in the spotlight in a show like this is radically different from what goes on off stage. “In our day-to-day lives we may feel compelled to shrink ourselves,” she says, and obscure from the judgmental eyes of passersby on the city streets, “because of the dangers presented in living in a world that fundamentally rejects one’s reality, one’s identity.”

She said this completely changes on stage: “When we can be our most authentic selves, and maybe even a little extra, we embrace this moment to metamorphose into our most eccentric and bountiful forms.”

“When we can be our most authentic selves, and maybe even a little extra, we embrace this moment to metamorphose into our most eccentric and bountiful forms.” -- Mercury, on performing in drag

When the fear is gone, she says, a very different kind of performance begins, where the best elements of drag and cabaret come into play. For example, Beary Tyler Moore, a genderqueer performer who’s been in many drag shows in Philly, including Gaybill at Tavern on Camac, becomes the rule rather than the exception in this new show. 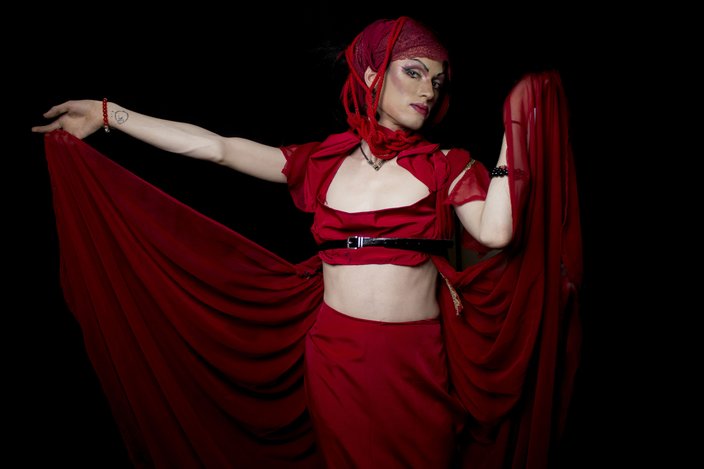 “Philadelphia has a great community of trans performers,” says Moore, thanks to show like Turn Up the Transmission that ultimately paved the way for gender fluid artists. Still, they say, “Drag performance is often seen as one binary dressing up as a different binary gender,” which has led to “gatekeeping and thinking of drag in a limited capacity.”

What many people in the LGBT may not even realize is that a lot of transgender people do not like to do drag because some of the concepts, like, “Oh, hey, there’s a man in a dress, ha ha, that’s funny,” can seem dated and even transphobic to them, even though the trans community has actually played a huge role in the way drag has evolved from the very beginning.

“These days, we are the ones who push and innovate drag,” says Moore. For example, a non-binary drag performer named Yvie Oddly just won season 11 of RuPaul's Drag Race.

“I want trans people to realize that drag is an artistic expression of gender and not a mockery of their struggles as a trans person,” they say. “Our show is really about the trans experience. We have had to create space for ourselves where we aren’t disrespected by people refusing to call us by our names or pronouns, where people don’t point and laugh at us because we aren’t ‘passing,’ or because they only see a ‘man in a dress.’ Many of us explore our gender identity and expression through the art of drag, so our gender is a part of our art. This allows us to break free of the confines of traditional drag and do things that are unexpected or extremely personal.”

Only as serious as you want it to be

Ron Binary, a non-binary transgender man, ultimately describes the experience as “a drag show made by trans people for trans people.” It’s important for a performer like Binary to have a platform, they explain, without having to fit into a stereotype of what it means to be gender fluid or even male.

“Non-binary trans people are held up to a higher level of criticism than binary trans people due to our inability to pass as the male or female gender model larger society approves of,” they explain. “We often aren’t able to express ourselves fully in attempts to appear respectable, and fight the stereotypes you hear on TV, at church or from your friends and family.”

The sheer effort required to exist safely in society is a serious one because transgender and non-binary people face discrimination in education, employment, healthcare and housing, even just walking down the street – all life-and-death issues. 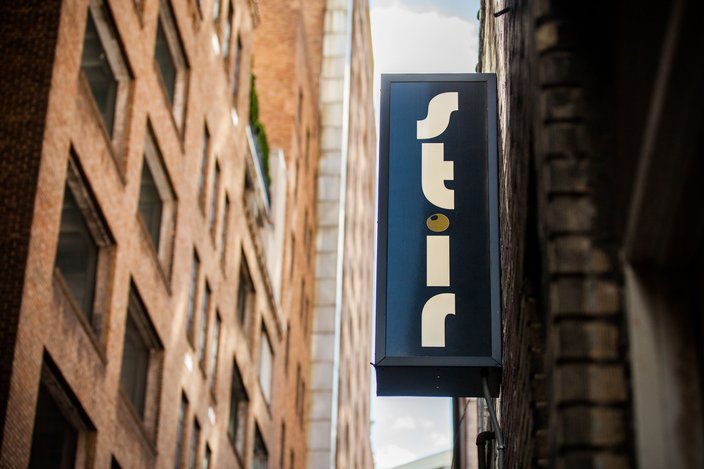 Binary says that an event like this can help show that “non-binary people also contain a mirth of joy, humor, sensuality and zeal to which we can approach the performance of gender,” something that is left out of the latest breaking news reports that tend to focus exclusively on violence in the trans community. A show like this gives a voice to people who are left out of the usual representations of gender and art expressions in popular culture and nightlife.

And while certainly the hardships of trans life could never be discounted with a few sequins and pasties, especially not if you consider that the transgender community in Philadelphia and around the country is statistically the hardest hit by violence , particularly against transgender women of color, art can be an important mirror.

Binary says that because the pain and loss that’s experienced by this community on a daily basis can be no less than shattering, there are a lot of reasons to want to celebrate individuality, performance and community.

“I really want somebody to feel more connected to trans people after enjoying our creativity, laughing and dancing with us,” Binary says. “Maybe then they can see gender is only as serious as you want it to be.”