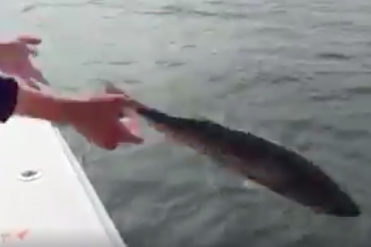 John Contelli, 19, of Monmouth County, throws striped bass back into water in a video that drew instant backlash on Facebook.

A New Jersey fisherman who faced the wrath of the Internet this week apologized Wednesday for posting a Facebook video in which he's seen gleefully tossing fish — possibly dead fish — back into the sea as part of a frowned-upon practice known as "culling."

On Monday, 19-year-old Monmouth County resident John Contello posted the video below on his public Facebook page. What seemed like a fantastic outing quickly turned into a nightmare for Contello after he boasted about chucking the fish away in order to get bigger and better striped bass.

The video, which has racked up more than 160,000 views, instantly drew the scorn of Facebook commenters, many of them fellow fishermen who abhor the illegal practice of holding onto regulation size fish only to inhumanely discard them — "Johnny Bucktail-style" — when bigger fish are reeled in.

"Wow what's the point?" one commenter asked. "The reason we have limits is for conservation, where is the conservation in throwing back Dead fish? After seeing this man's behavior, how could anybody want to fish with him?"

Most of the commenters objected to Contello's treatment of the fish, which should have been thrown back into the water immediately and allowed to live if they weren't going to be kept.

"This is disgusting," said another commenter. "How often do you lip a fish and it doesn't shake? At the end of the video he even bumps one of the fish on the floor with his foot. No movement from any of them ... Hopefully he's learned a lesson and will discover a respect for the fish and the sport as well as teach conservation to others."

As NJ.com notes, state law permits anglers to keep one striped bass per day if it is between 28 and 43 inches in length. A second bass can be kept if it is above 43 inches, while "bonus tags" can be obtained by application to keep an additional one more fish between 24 and 28 inches per year.

In his apology, Contello claims that none of the fish he threw back were dead.

"As a 19-year-old who loves to fish (and who has been fishing every chance I can get since I can barely remember), I feel terrible about the backlash over my recent video," Contello wrote on Facebook. "Despite what it may look like on the video, I want to be 100% clear in saying not one of the fish we threw back over the side was dead ... I know the video looks bad folks, but it’s not what it seemed – and forgive my excitement, it was a mad dog bite and we were all very excited."

A spokesperson for the New Jersey Department of Environmental Protection told NJ.com that Wildlife Conservation Officers with the state Division of Fish and Game are reviewing the video. Contello said he will be happy to speak with wildlife enforcement officials.

"I’m confident that I’ve not done anything wrong legally (and welcome the discussion with enforcement folks monitoring this ongoing madness), but if perhaps if I’ve treated this great fish in a way other than with the great respect it deserves, I’m sorry – and I’ve learned a great deal from this experience."