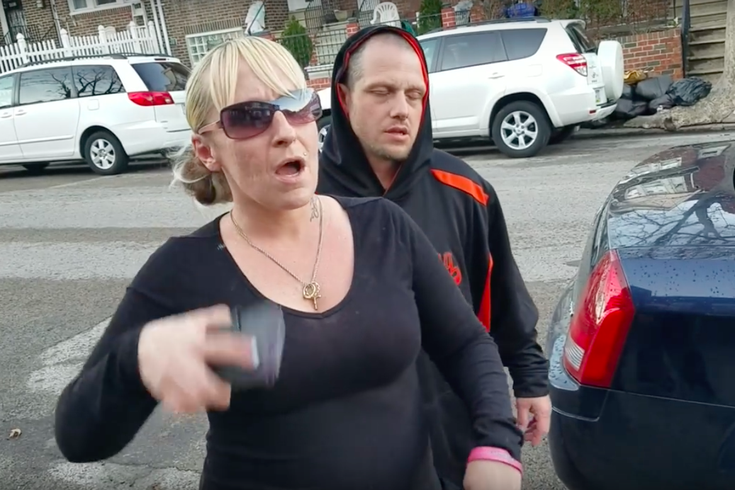 A Northeast Philadelphia man's scripted video about a neighbor letting her dog poop on his sidewalk went viral this week.

Back in December, we brought you the story of Jay Jay McGuire, the Northeast Philadelphia man whose crass (to many) videos have viral potential. That tends to happen when the outfit you run is called “The Philly Offensive.”

You can read more about McGuire, The Philly Offensive and the online following he’s built over the years via this link.

We’re reminding of you of this old story today because McGuire is behind a video that went mega-viral this week.

Not only was it shared by Snoop Dogg and several UFC fighters, but it turned up on ESPN (sans credit) and “100 major websites around the world if not more," per McGuire, who noted that it will appear on an upcoming episode of MTV's "Ridiculousness."

In the video, titled “Scumbag people and thier (sic) dogs,” McGuire is shown confronting a pair of people outside his Philly home. One of them, a woman, is walking a Chihuahua.

The premise is that she permitted the pooch to poop on the sidewalk in front of his home in the past. He profanely confronts the woman and urges her to remove the dog poop from the sidewalk. She said she doesn’t have a bag. He doesn’t care. She picks it up with her bare hand.

The video is nowhere near safe for work in its unedited condition, so instead of embedding it here, we’ll simply hyperlink its latest YouTube iteration. He ended up selling the rights to UNILAD.TV, which tallied some 15 million views, McGuire said.

"It's countless at this point," he said of the social media reach.

It is nowhere near real, either. You see, McGuire’s videos are always scripted but performed in such a fashion that people mistake fiction for reality.

I caught up with him on Wednesday to discuss the video, which was filmed in Mayfair earlier this month.

"So many people think it's real, probably because of the way I started it with walking up to the window as if I was waiting for these people to come back," he said. "The dude Mike who plays the 'junkie' kept calling me, saying 'let's do this video.' That's his wife in the video, and the dog is my mom's. She was worried that it would get scared doing it."

It's not his biggest video ever; that would be one about bystanders deciding not to help a young child stuck alone in a hot car because he's wearing a Dallas Cowboys shirt. It also got him kicked off Facebook because the comments got out of hand.

But the dog poop video's success was a big surprise since it didn't seem viral-worthy, he said.

Though scripted, that sure looked like dog poop in the woman's hand. Was it?

"Nah," he said. "It was just little pieces of cupcake balled up to look like poop."