'I could tell by talking to the guy that he didn't really think it was a bad thing that he did,' one witness said 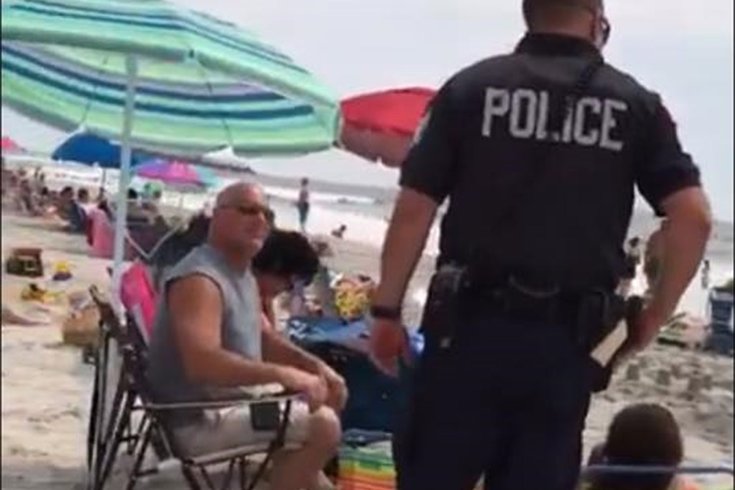 Police in Ocean City released this photo of one of their officers on the beach talking with the man who apparently threw an umbrella pole and struck a sea gull in the neck on Monday. After police departed the scene, the man and his family eventually packed up and left the beach as well, witnesses said.

Authorities in Ocean City are seeking assistance from the public to locate and identify a man who allegedly struck a seagull with a beach umbrella pole on Monday morning, causing injuries that later resulted in the bird's death.

But officers responding to the scene already had interviewed the man, who was at the beach with his family, after witnesses to the attack alerted lifeguards and contacted police. Officers left the beach after talking with the man about the incident, and the unidentified man and his family left the beach soon after.

Witnesses told PhillyVoice Monday evening that the man threw the pole at the seagull from a distance of about five feet, striking it in the neck. The bird sat motionless, evidently paralyzed, as witnesses at the 12th Street beach confronted the man and other seagulls gathered around their injured mate.

Sean Swift, who manages an umbrella and beach chair rental company, told PhillyVoice on Tuesday about his own interactions that morning with both the man and police.

Swift said he was approached by a witness who told him a seagull had been blatantly injured on the beach. Swift told his business partner to report the incident to two summer cops on patrol on the boardwalk.

"I walked over to the seagull," Swift said. "I could see it was messed up. Its neck was hanging off. I said, 'Who did this?' The guy stood up, an older tough guy, about 55 or 60 years old. He said, 'I did it. It was trying to take my granddaughter's sandwich. I wasn't trying to kill it.'"

As Swift and the lifeguards carried the "twitching" bird off the beach, the two officers from the boardwalk interviewed the suspect.

"The cops came down and literally talked to him for like two minutes," Swift said. "I ran up to them. I asked them, 'What's the fine? What's the punishment?' They get real cocky and one of them says they're not going to do anything. 'It's just a seagull.'"

Swift said the cops told him there is no law or ordinance against killing the seagull and that they couldn't take the man off the beach because he had a beach tag. They apparently never asked the man for his name, Swift said.

"Yeah, well, people complain about a lot of things," one of them replied.

In a statement Tuesday morning, Ocean City police described their response to the situation, confirming that an animal cruelty investigation is underway.

Authorities claimed the man, when first interviewed by police, told them the seagull was being aggressive toward young children on the beach when he threw the umbrella pole. The officers left the scene without taking further action, police said.

But another witness later contacted police with a different account of what transpired, reporting that there were no children in the area and that the man's actions were malicious. By that time, the man had already left the beach.

Seagulls are a migratory bird species and are thus protected from harassment and injury by federal law. New Jersey's animal cruelty statutes also prohibit "use of a live bird as a target" and "abandoning disabled animals in a public place," classifying both crimes as disorderly persons offenses.

Swift, outraged by the police response, said he called the department directly.

"Is it legal or illegal to kill seagulls on the beach?" he asked a woman who took his call.

Swift said he was told a supervisor would return to the beach to investigate, but instead the two summer officers returned to the scene.

"They told me their sergeant overrode them," Swift said, "and now they had to do a report."

According to Swift, the cops admitted they didn't know there was a law against killing seagulls and that they had taken the suspect's word for what happened without getting his name. Swift told the cops it should have crossed their minds that the man was possibly lying to them.

"The worst thing is that it's a family beach," Swift told them. "People see that and that's not good for the town."

"Yeah, that was my sergeant's concern," one of the summer cops responded.

Another woman, who was so disturbed after reading PhillyVoice's account of the incident on Monday, called the Ocean City Police Department on Tuesday morning and was told something different. 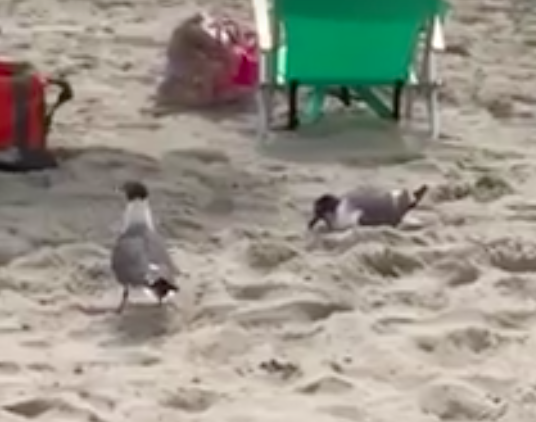 Seagull, at right, appears motionless on Ocean City beach witnesses say man “speared” the bird with the tip of a child-sized umbrella.

Marybeth Bennett, a former avian rehabilitator, said a secretary for police Chief Chad Callahan told her that officers "didn't speak (to) or see the perp, so they could do nothing."

"I told her that law enforcement is supposed to enforce all laws, not just the ones they decide are worthy," Bennett said in an email. "It is not right for police to pick and choose the laws they want to enforce."

"I see seagulls all day long," said Swift, who has lived in Ocean City for 15 years. "I've had food taken out of my hand this summer. They're pesky and they bother people, but I've never seen anyone go after one like that. I could tell by talking to the guy that he didn't really think it was a bad thing that he did. He was just kind of OK with it."

The incident remains under investigation by and the New Jersey State Department of Fish and Wildlife has been notified.

Anyone with information about the incident or who may be able to assist in identifying the person responsible for the injuries to the seagull should contact the Ocean City Police Department at 609-399-9111.