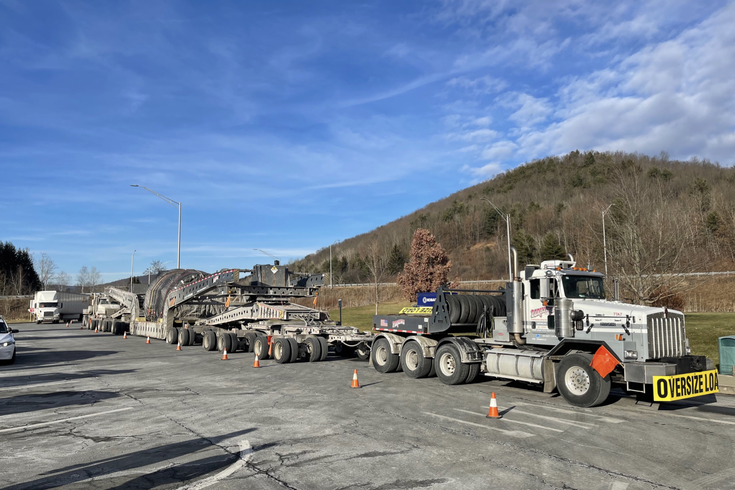 A 213-foot-long tractor-trailer carrying a 294-ton empty fuel tank is traveling across Pennsylvania during a nine day trek that's already in progress. The so-called 'superload' is expected to cause delays along its route, according to PennDOT.

A massive tractor-trailer hauling a "superload" westbound across Pennsylvania is expected to cause traffic delays over the next week as part of a technically complex operation that has taken months of planning, PennDOT officials announced.

The 294-ton, 213-foot-long superload consists of an empty fuel tank from a decommissioned nuclear training site near Saratoga Springs, New York, where it left on Wednesday to begin a nine-day journey covering more than 400 miles.

The tank comes from a D1G Prototype reactor for the U.S. Navy at the Kenneth A. Kesselring site. It was decommissioned in 1996 and removed the following year.

Though radioactive, the tank does not pose any harm of significant exposure to the public. It's scheduled to arrive Jan. 21 in Wampum, Lawrence County, where it will be disassembled and disposed of by Alaron Nuclear Services, a company that specializes in processing low-level radioactive materials. The company's facilities are based about 40 miles north of Pittsburgh.

Transporting the tank is a major feat that requires escort vehicles to help the truck driver navigate 16 counties and all of the various exit ramps and unusual traffic patterns along the route. An impending winter storm also is expected to drop several inches of snow in parts of the state on Sunday and Monday, making the trip more challenging and risky.

Tonight, a 213-foot-long, 294-ton #SuperLoad starts its over 400-mile trek from West Milton, New York, to Wampum, Pennsylvania. Drivers along the planned route should remain alert for this two-lane operation.

PennDOT described the superload as a "rolling slowdown" that will use two lanes of traffic and cause a series of stoppages and delays along the route. The tractor-trailer will move either at the posted speed limit or 30 mph — whichever is lower.

To reduce the traffic impact, the majority of travel will be done at night, but movement of the superload could also be hampered or delayed by inclement weather. The planned route was summarized by GoErie:

The superload will enter the state in Susquehanna County and follow Interstate 81 south to Interstate 80. It will follow I-80 west across much of Pennsylvania until veering northwest on Route 153 in Clearfield County, then moving north to Ridgway via Route 219. It will travel through Elk, Forest and Clarion counties on routes 948 and 66; catch Route 322 east to Franklin, in Venango County, and Route 62 west out of Franklin; pick up Route 173 south at Sandy Lake, in Mercer County, and reconnect with I-80 westbound just north of Grove City. It will complete the journey on Route 422, the Pennsylvania Turnpike and state and local routes.

The job is being handled by Perkins Specialized Transportation Contracting of Becker, Minnesota, a company with a proven track record of planning and executing complex superload projects.

In 2018, the company moved seven engines, each weighing 637,000 pounds, along a 61-mile stretch from a port in the Upper Peninsula of Michigan. That job took a year and a half to plan and three and a half weeks to complete. Such projects require route surveys, feasibility studies, permitting authorities and the support of third-party teams and government entities.

Lew Grill, a truck-driving expert and instructor from Montana, told The New York Times that the trek through Pennsylvania takes tremendous skill on the part of the driver.

“This is phenomenal,” Grill said. “If this guy pulls this off professionally, he should get accolades. We should bow to him. There are not many drivers like this.”

To put the load in perspective, the average weight limit for a tractor trailer is 40 tons, more than seven times lighter than the superload in Pennsylvania. The trailer is approximately the length of a 20-story building or roughly seven telephone poles.

PennDOT advises motorists to be aware of road conditions by checking the 511PA tool, which is free and available 24 hours a day, and by following regional Twitter alerts. Department updates on the superload's travel can be followed on social media with the #PAsuperload22 hashtag.

This is the #superload that entered northeastern PA last night. Follow the #PASuperload22 hashtag for updates as the journey continues to Wampum, Pennsylvania!