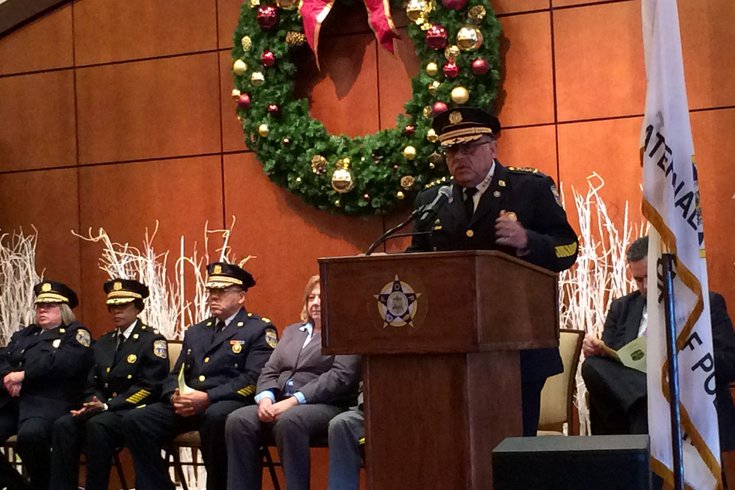 Every day, members of the Philadelphia Police Department are involved in more life-or-death situations, harrowing encounters and interactions with the community than any news site could hope to capture, even when covering the police on a daily basis.

But even if the everyday actions of the officers on the street don't always show up on TV or in the newspaper, the officers remember.

Wednesday morning at the Philadelphia police's bi-annual Commendation Ceremony, law enforcement officials honored their brothers and sisters in blue for their bravery and valor in the face of adversity – and for the first time recognized officers who, when faced with an obstacle or a situation that could have resulted in violence, instead de-escalated the situation peacefully.

"This is an extraordinary day, but it's just a slice of the pie, just a small piece of what police officers do every day," said Police Commissioner Charles Ramsey at the opening of Wednesday's event.

During the day's event, four officers – Brian Nolan from the 22nd District, George Lane from the 26th District, Edward McConnell of the city's bomb disposal unit and Christopher Shelving from the city's strategic planning unit – were awarded valor awards for their actions while under fire.

Also, 17 officers were honored for acts of bravery. The actions these officers took while in the line of duty ranged from helping people out of a burning building to saving suicidal individuals.

Some cases were especially harrowing, like what officers Brendan Berd, Jonathan Ballinger, Michael Wilson and sergeants Dennis Keenan and Steven Woods endured when, on June 13 in Port Richmond, they barricaded a street while they were fired at from a home on the 2500 block of Emerald Street. While the gunman committed suicide, none of the officers returned fire in that incident, and instead, worked to barricade the street and to make sure any civilians in the area got to safety.

In the tactical de-escalation category, 23 officers were noted for their actions in quelling dangerous situations without violence.

One of the most notable was an incident involving nine of the officers awarded for their actions in stopping a standoff that occurred in Northeast Philly in October, when a man with a gun, holed-up in a building, made demands while engaging officers in a five-hour long negotiation process.

Eventually, the man fell asleep and police could sneak quietly into the building. But as detailed at the awards ceremony, the man was still holding the gun with the trigger pulled and the hammer – the firing device on a handgun – cocked.

Thinking quickly, officers slid a piece of cardboard between the hammer and the chambered round, to make sure the gun couldn't fire, before apprehending the suicidal man.

Lt. Krista Dahl-Campbell, head of the Philadelphia Police's community relations unit, and the host of the awards ceremony, said that the new tactical de-escalation award was an important step in celebrating officers for something that they do every day, when they use restraint in handling incidents.

"Each job is critical in its own right, and we wanted to make sure we acknowledge everyone," she said.