The Philadelphia Eagles got a little extra rest over the weekend after playing in Houston on Thursday night. Let's get to a few notes in the wake of the team's mini-bye.

I had the pleasure of listening to Lane Johnson speak about mental health at a small event on Saturday. (PhillyVoice will have a story on that experience soon). Afterward, Johnson volunteered that he wants to play "maybe two more years" after this season, which is noteworthy from the perspective of the Eagles' future draft needs.

Johnson's contract runs through 2025, so if he did retire after the 2024 season, he would be leaving a $16,500,000 salary (non-guaranteed) in 2025 on the table, assuming the Eagles would still be interested in paying that at that time. Johnson's timeline for potential retirement increases the urgency of refilling the offensive tackle pipeline with young players who can be groomed to take over for him in 2025 and beyond.

The Eagles feel very likely to be shopping for an edge rusher early in the 2023 NFL Draft. However, as they have repeatedly shown, they also like to have succession plans in place along the offensive line well in advance. Do not dismiss the possibility of an offensive tackle with an early pick. Starting RG Isaac Seumalo is scheduled to become a free agent this offseason, so if the Eagles were to lose him, it would make sense to draft a prospect who would ideally be able to initially start at guard before eventually kicking out either to RT or LT.

I was looking at some basic NFL statistical leaderboards, and noticed that they're loaded with Eagles.

• Miles Sanders is seventh in rushing yards (656), fifth in rushing TDs (6), eighth in rushing first downs (33), and he has not yet fumbled this season on 131 carries.

• Javon Hargrave is third among defensive tackles in sacks (6.0).

• Haason Reddick is second in forced fumbles (3). He has a share of the league lead in fumble recoveries (2).

• Chauncey Gardner-Johnson leads the NFL with 5 INTs. Darius Slay and James Bradberry are tied for seventh with 3 apiece. Bradberry is third in pass breakups (11), and Slay is ninth (8).

The Saints' first-round pick, owned by the Eagles, currently sits at 10th overall, per Tankathon. 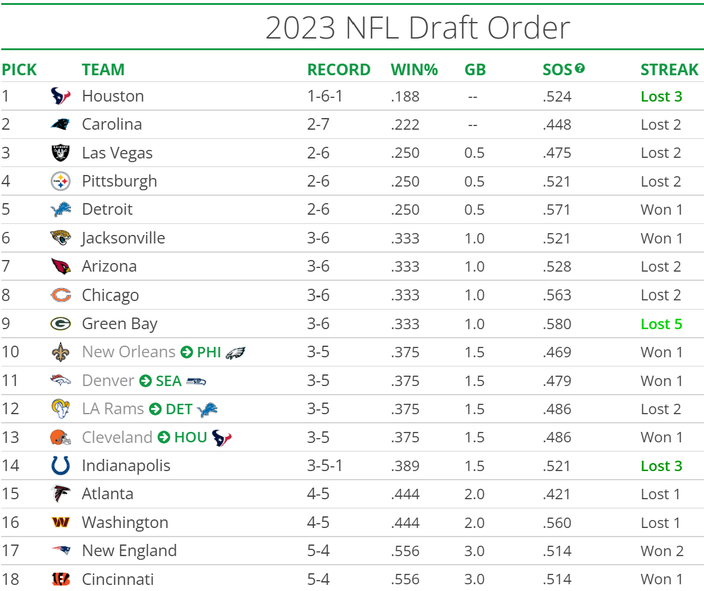 If the Saints lose on Monday night, it will rise to sixth overall. If they win, it will fall to 15th overall.

There are some who have diminished the Eagles' 8-0 start to the season because they have played an easy schedule. If you'll recall, the 2017 Eagles' regular season accomplishments were diminished heading into the playoffs that year as well.

And then they won the Super Bowl with a backup.