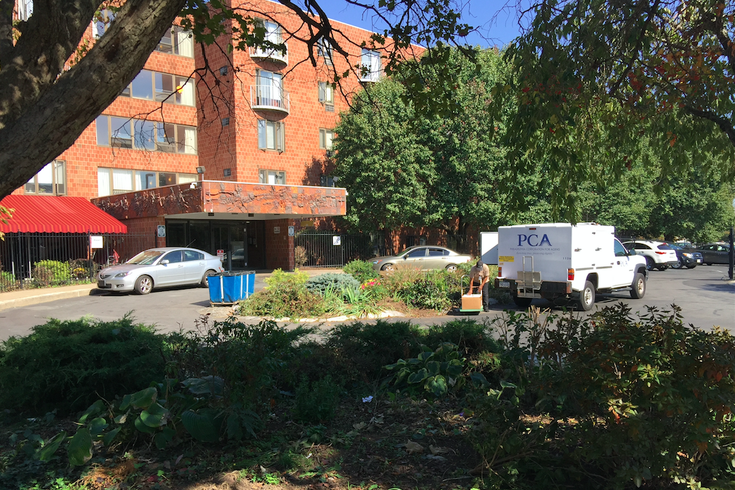 Guild House West, located at 1221 Fairmount Ave. in North Philadelphia, made national headlines when members of the New Black Panther Party were seen outside its polling place on Election Day 2008. As local officials fend off 'rigged election' claims from Donald Trump, the site was a peaceful one on Monday, Oct. 17, 2016.

Along the cul-de-sac outside Guild House West on Monday afternoon, a Philadelphia Corporation for the Aging worker loaded meals onto a hand truck. She would soon wheel it inside a Fairmount Avenue apartment building that several hundred seniors call home.

The sun was shining brightly, the birds were chirping happily and, before lunch was served, a handful of residents in the affordable rental-housing community chatted in a cafeteria that will double as a polling place in three weeks.

There was talk of a resident who recently passed away (meaning there’s a vacancy), but there was zero chatter about a “Voter Confidence Press Conference.” Held in City Hall less than two hours earlier, a group of city, state and federal officials assured anybody who listened that the upcoming election is not rigged, despite paranoid ramblings to the contrary.

What prompted the officials – among them, state Sen. Vincent Hughes, City Commissioner Al Schmidt and David Thornburgh of the Committee of Seventy – to hold that event was the fallout from Republican presidential candidate Donald Trump saying, among many things, that:

Schmidt noted that he doesn't think there's "any added amount of integrity to the process that can be brought by some knucklehead from Altoona coming to Philadelphia on Election Day." Hughes then recalled the 2003 mayoral election when observers "wearing little blue buttons" disrupted the process by trying to enter polling places and trying to interview voters.

Though not part of the event, local attorney Michael Coard focused on the underpinnings of Trump's accusations of "widespread voter fraud" impacting the results.

"We were there to provide security for our people [in 2008]. There was no voter intimidation.” – King Samir Shabazz

"F--- Donald 'Make America Grope Again' Trump and his dog-whistle demagoguery to racist thugs regarding totally irresponsible and completely false accusations about Blacks purportedly engaging in widespread voter fraud in Philly," he said. "Even [Schmidt] said, 'The real threat to the integrity of elections in Philadelphia isn't voter fraud. ... The real threat is irresponsible accusations.' Like I said, f--- Trump."

With an “if you see something, say something” mantra about Election Day shenanigans, and an (866) OUR-VOTE helpline for day-of issues, speakers at the nonpartisan event expressed concerns about Trump’s implications.

Sure, there are hiccups from time to time, “but none of what happens undermines elections the way those comments do,” said Schmidt, a Republican in a deep-blue city.

He also offered deep-dive specifics about the difficulty of rigging elections in Philadelphia.

While not referring to Trump by name – only as the “guy with the funny hat” – City Council President Darrell Clarke went a step further.

Trump has spoken a “very coded message about turning the clock back, rolling all sorts of rights back,” Clarke said in City Council Chambers. “He’s stoking the biases of people across the country. Look at the places he’s gone in Pennsylvania: White-majority municipalities talking about things that can happen in places like Philadelphia. He’s clearly stoking the biases some may and may not have.”

While it’s folly to attempt to ascribe motivation to Trump’s utterances, the Guild House West was all but certainly the inspiration for one of the “horror shows” he cited.

THE ROOTS OF THE ALLEGATIONS

In 2008, video surfacing of members of the New Black Panther Party stationed outside that polling place sparked tension and voter-intimidation conspiracy theories that linger to this day.

One of the men who appeared in that video – King Samir Shabazz, shown holding the billy club – told PhillyVoice on Monday said that moment had nothing to do with bullying voters in the 2008 general election, despite that current-day candidate’s coded implications.

“We were there to protect our elders and youths, to make sure they could safety vote whether it was for [John] McCain or [Barack] Obama. [At the time], the KKK and neo-nazis were promoting their propaganda,” said Shabazz, who’d be banned from polling places for four years as a result of the headline-generating case.

“We weren’t promoting Obama," he continued. "We were there to provide security for our people. There was no voter intimidation.”

That was eight years ago, but it still resonates today.

No longer a part of the New Black Panther Party, Shabazz is now the National Minister of Defense of the Black Riders Liberation Party.

While he’ll “never vote for anyone in white America,” Shabazz was asked for his take on the election, specifically cries of rigged elections tracing back to that November 2008 day.

“Donald Trump is the devil. He’s proving himself to be what he is: The devil,” he said, ascribing the same title to Democratic candidate Hillary Clinton. “Anything he spews out of his mouth is bulls---.”

Those numbers, combined with the adage about past practice predicting future performance, is likely why Democratic ward leader Arthur Green and Republican poll inspector Alvesta C. Graves didn’t seem all that worried about Trump’s volunteer poll-watcher brigade making a mess of the Guild House on Nov. 8.

(For his part, Schmidt said “the buzz and the chatter on the ground” are vastly distant; despite so much speculation about Trump-recruited poll watchers descending on the city, he said his office has yet to receive a call from someone who wanted to come into the city and do so.)

Graves seemed unconcerned about the whole issue. He’s a Republican poll watcher, and he lives in the building that houses his polling place. As fellow residents ate their lunches, he pointed out where the voting machines go, and how he sets the room up in a fashion that only voters are allowed into the polling area.

If anybody’s engaged in voter intimidation, the 68-year-old hasn’t seen it over the course of the past 40 years of election-day involvement.

“I’m not letting it stress me out,” he said. “We know we’re in a heavily Democratic city. By watching polls on Election Day, that’s my way of breaking it up. I don’t suggest who people should vote for. People in this building will vote for who they want to vote for, and if they don’t want to vote for anybody, they don’t have to.”

For his part, Green saw the rigged-election chatter as mounting desperation as Trump faces the specter of being defeated on the national stage.

“Anybody with any wisdom can see that he’s losing so he’ll say anything or do anything to not let that happen because of his pride,” said Green, noting of the 2008 incident that, “Republicans whipped it up so it would become a black/white thing.