She shot her boyfriend five times and killed him: was it self defense? 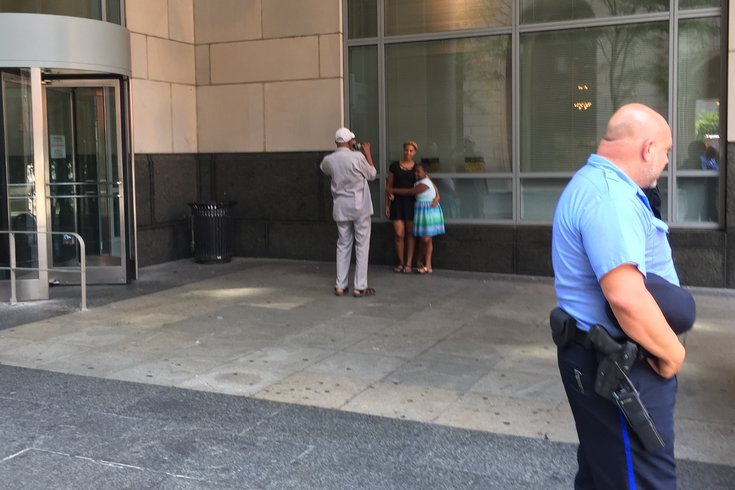 LeToya Ramseure (left) poses with her 9-year-old daughter after appearing in Philadelphia court on charges that she fatally shot her off-and-on boyfriend during a dispute in Frankford in July 2018.

Emani Ramseure sat near the front of the courtroom wearing a shirt with a glimmering silver-star-and-multi-colored dress, surrounded by a dozen relatives and loved ones.

At times, her grandmother Rashena draped her arm over her shoulder, pulling her close and shielding her eyes.

Seven weeks ago, the nine-year-old’s father, Devon Roye, was killed inside a home in Frankford. The autopsy report said the bullet or bullets – five were fired – that struck his torso were to blame.

The girl’s mother, LeToya Ramseure, was also in Courtroom 306 of the Criminal Justice Center for several hours on Wednesday.

Her attorney was working to convince Municipal Court Judge James DeLeon that Roye’s death didn’t rise to the level of homicide.

Everybody inside the courtroom knew that Ramseure shot Roye – her on-and-off boyfriend of the past 10 years – around 2:30 p.m. on July 12.

She admitted as much during her interview the next day with Homicide Detective Jeffrey Burke, a 30-minute discussion replayed on a big screen that everyone in the courtroom – including the young girl – could see.

What a jury will likely decide at some point in the future is whether the 24-year-old woman feared for her life when she pulled that trigger in self-defense, or if she’s guilty of manslaughter, the charge which DeLeon decided she should face.

Until then, in a case rife with lingering tension and anger, the families have been warned to steer clear from one another as allegations of death threats behing made prompted DeLeon to issue stay-away orders.

In all, Wednesday’s preliminary hearing lasted about two hours.

Assistant District Attorney Cydney Pope had initially sought a continuance, but DeLeon politely asked her to return to her office, grab the videotaped confession and bring it back.

Ramseure’s defense attorney, Michael Coard, launched into an argument maintaining that no crime had been committed, and that his client – who was already out on 10 percent of $100,000 bail – should walk out of the room a free woman.

Despite the five shots fired into Roye, the commonwealth hadn’t proven a crime occurred, and that every shooting isn’t a criminal case, said Coard as his client sat by his side, her hair braided in the fashion of a halo.

“He came toward me and then I just shot him. (The gun) just went off. I didn’t know what he was going to do." – LeToya Ramseure

He then spoke about the particulars of that violent day.

After issuing threats of violence via text message, Roye allegedly returned to the house, barged his way in and assaulted the woman who, fearing for her and her mother’s lives, got a gun and shot several times. This was not homicide, argued the defense attorney.

“These are good issues,” said DeLeon, after Coard drew parallels to police shooting suspects and shopkeepers firing at would-be robbers without facing criminal charges. “Let’s see where it goes.”

Pope started with the basics from police and medical examiner’s reports. Officers and medics were called to the home where Ramseure lived with her daughter, mother, brother and, sometimes, Roye around 2:30 p.m. that Thursday in July.

They found the victim in the first-floor bedroom where Ramseure – with whom he’d been fighting the night before and that morning – had shot him. He was taken to Temple University Hospital, where he was pronounced dead about an hour later.

Burke, the homicide detective, was then called to the stand. In a matter of seconds, all attention turned to the videotape from Homicide Unit Interview Room C as it started rolling.

From her angle, the young girl looked past her mother’s defense table toward images of her sitting in a rectangular room resembling a cinderblock, where Burke was shown reading her mother her rights.

He asked for biographical basics: where do you live (the house where the shooting occurred), what do you do for a living (a job with Americold Logistics refrigeration and cold storage in Hatfield, Montgomery County) and what’s your father’s name (“I don’t know him”).

Then, he steered her toward the chronology leading to the fatal shooting.

Ramseure had known Roye since she was 13 years old, and they’d dated off and on since their daughter was born about three years later. The night before the killing, they’d been fighting a common fight. He suspected she had been hanging around with other men.

“I don’t want to fight with you. I just want to be with you,” she said that she told him that night.

That didn’t soothe the friction. The next morning, they were still fighting.

He left the Hawthorne Street home before she woke up the next day but they were still communicating via text. By the end of it, including a battle over $50 she said he owed her, Ramseure told him to come pick up his stuff.

She was kicking him out of her mother’s house, where he lived despite an active restraining order.

She packed up his possessions – including the gun she would later use to kill him – and put them in a duffle bag out in front of the house. (This, after telling him that she was going to throw the gun in a sewer.)

“I was talking to my mom in the living room and told her that I’m fed up with it,” she said during the interview. “He calls me and tells me to go get the money from one of (the other men). He texted that 'your daughter’s going to need new parents because I’m going to kill you and I’ll go to jail.’”

Soon, she said, Roye’s car pulled up and he knocked on the front door that she’d locked.

“He bum-rushed me as soon as I opened the door and hit me,” she told the detective, explaining that she curled up into a ball on the floor, not suffering any injuries that required hospitalization. “I was just scared.” 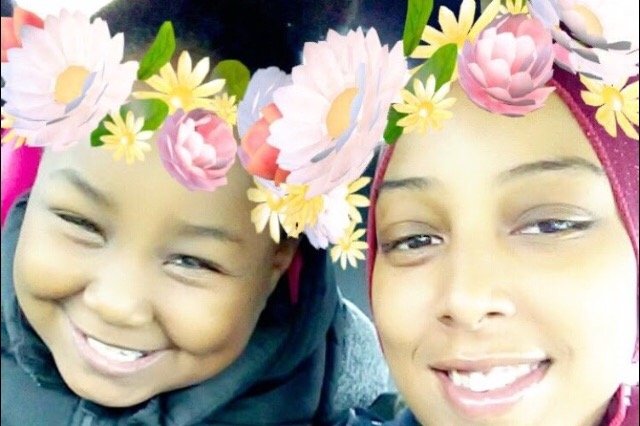 LeToya Ramseure (right) appeared in court on Wednesday, August 29, 2018 for a preliminary hearing on charges that she fatally shot the father of her daughter Emani (left).

When he joined Ramseure’s mother in another room of the house, Ramseure she went out front opened the bag, grabbed the gun and went back inside.

“I told him to get out,” said Ramseure, who already had a restraining order out against her boyfriend who’d allegedly pistol-whipped her during a confrontation last year. “He came toward me and then I just shot him. (The gun) just went off. I didn’t know what he was going to do. I didn’t know if he was going to hit me. Everything happened so fast.”

After the shooting, she called 911.

“I just want to go home,” she’s heard saying before the interview with the detective ended.

“This is a joke, with all due respect. In my 20-plus years (as an attorney), I’ve never seen a case brought like this. It’s an absolute outrage.” – Michael Coard, defense attorney for LeToya Ramseure

Burke then testified that he didn’t see any visible evidence of an assault before leaving the stand without any cross examination from Coard, who’d argue that his testimony supported his stance that a crime hadn’t been committed.

“This is a joke, with all due respect,” he said. “In my 20-plus years (as an attorney), I’ve never seen a case brought like this. It’s an absolute outrage.”

DeLeon and Pope disagreed, the latter drawing attention to the fact that she went outside to get the gun and returned.

The judge noted that the evidence presented made it sound like a case of voluntary or involuntary manslaughter. It’s clearly not murder, he said, citing the battered woman syndrome as a possible defense.

“I don’t necessarily know if she intended to kill him,” Pope said. “She was sick of it. Make him pay a little bit in the heat of passion. She was worked up.”

“And beaten up,” Coard interjected.

Soon, DeLeon would hold the case over for trial, scheduling Ramseure’s arraignment for September 19.

'I'M SORRY FOR BOTH FAMILIES' LOSS'

Before the sides exited the courtroom – Roye’s family (sporting black T-shirts that read “In Memory of Devon R. Roye") left about 15 minutes before Ramseure’s were permitted to do so – the attorneys huddled with the judge.

Coard said Ramseure had received death threats via social media from the dead man’s loved ones. The judge then warned both sides about that sort of behavior which could draw anywhere from two to four years in jail, he said.

“I’m sorry for both families’ loss. You know this case is contentious,” he said. “Please don’t come back here to have to deal with me if I hear about any threats over Instagram, Facebook or Snapchat.”

A GoFundMe campaign was launched earlier this month to help Ramseure move on from the "physically abusive relationship with her daughter's father which unfortunately ended with his death."

"Due to threats being made to LeToya and the family, we have no choice but to leave our home and permanently relocate since LeToya’s release," it reads. "LeToya was never in trouble with the law, and she is a respected member of the community and her family."

She was free to walk out past the bulletproof divider in Courtroom 306, where she was hugged closely and handed a packet of tissues to wipe away any tears.

Out in the hallway, Roye’s family could be heard pushing back against the “crime of passion” defense through a closed stairwell door.

When the suspect left the building, a relative took a picture of her with her arm around her daughter.

Moments later, she shook her head no when asked if she’d like to comment on what had happened inside. She'd been advised against it so as not to damage any potential defense strategies.

After taking a reporter’s business card, a relative said, “We have to talk to the activists and see what they think first.”