Steven Van Zandt on his album, his upcoming show, and life with Bruce Springsteen and Tony Soprano

The legendary guitarist known as "Little Steven" talked to PhillyVoice ahead of his show at the Keswick this weekend. 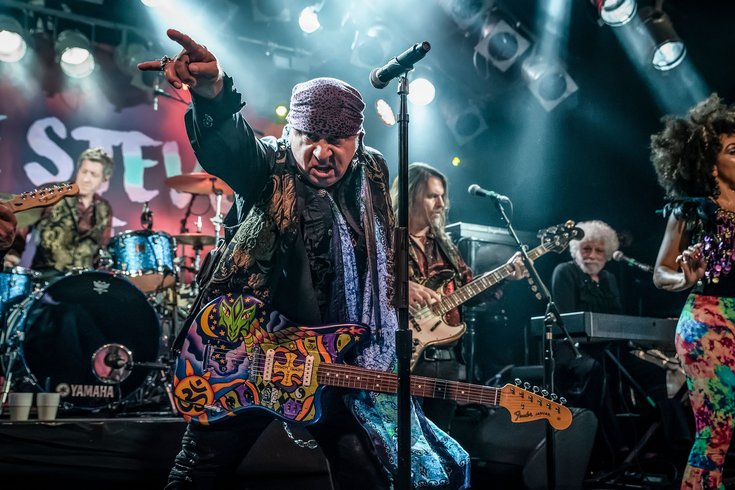 Steven Van Zandt, the man known as "Little Steven," is into his fifth decade as one of the most recognizable names in American rock music.

He's been the top guitarist in Bruce Springsteen's E Street Band since the '70s, and later spent a decade as the sidekick of another New Jersey legend when he played Silvio Dante on "The Sopranos." Van Zandt, who grew up in Middletown Township, N.J., also famously participated in anti-apartheid in the '80s, runs two channels on Sirius XM radio, and is a member of both the Rock 'n' Roll Hall of Fame and the New Jersey Hall of Fame.

The 68-year-old Van Zandt, in the last couple of years, has focused on his solo work, re-convening his band The Disciples of Soul with a new lineup and recording a pair of albums, "Soulfire" in 2017 and "Summer of Sorcery" this year. Van Zandt and the band are bringing their tour to the Keswick Theatre on Saturday night, and Van Zandt talked to PhillyVoice about the show, the new album, and various stories from throughout his life and career- including the major role Philadelphia played in the rise of the E Street Band.

PhillyVoice: How is the tour going so far?

Steven Van Zandt: Really great. This album has just translating to a great live show, so it's been wonderful.

PV: Are you playing stuff from all throughout your career, or are you more concentrating on the new album?

SVZ: When I do a new show, it's always the new album, and then you fit in some other things, that fit in from the past. But I do the entire album.

PV: So what can we expect specifically in the show at the Keswick?

SVZ: The band now has been together over two years, so it's been quite amazing. There's 15 of us, five boys and three girl singers, just the most amazing musicians in New York, and I'm just so lucky that they've stayed loyal to me the past two, two-and-a-half years. Even though they started off great, you stay together that long you just get better and better. It's a lot of different things, because I get bored very quickly, so a lot of different genres mixed in, and tell the story. 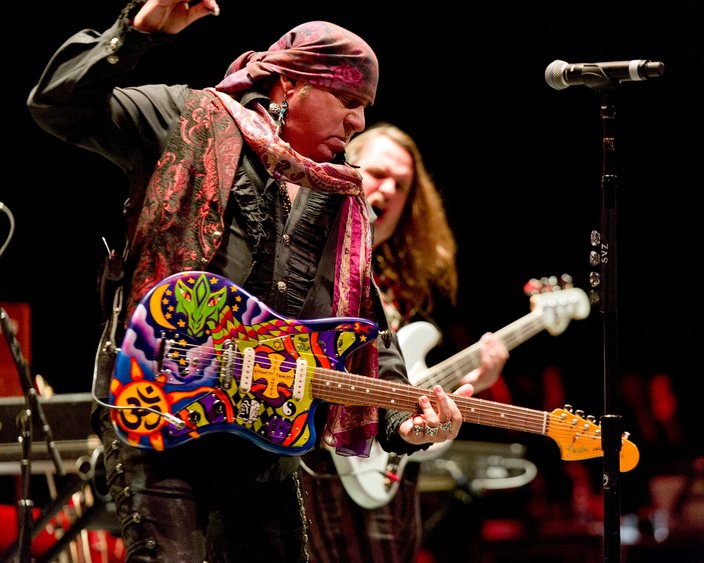 PV: Now, there was an original band called The Disciples of Soul [who backed Van Zandt starting in the late 1980s], and now the current band is also called the Disciples of Soul. Is it any of the same people from before, or is it a whole new group?

SVZ: No, it's a whole new band, and this past two and a half years. I didn't do anything artistically, in terms of my own music, for over 20 years. So it's a whole different band now.

PV: So I guess you've just been with E Street Band, and then acting, during that time.

SVZ: It's the first time I've ever done two records in a row with the same band. But it's been two years now since Soulfire, and then we did the whole live project in the middle [Soulfire Live] which was a big seven-vinyl album box set and now we've done the new Summer of Sorcery album.

PV: So let ask you about that album. What is it about this album that stands out, compared to stuff that you've done before, on your own?

PV: Was the idea of making it "12 little movies" inspired by the acting that you've done?

SVZ: Maybe. I've taken on characters before in songs, but this time I really did the whole album that way, so maybe, you might be right. Unconsciously, it might be true.

PV: So, I believe you still program two channels on Sirius?

SVZ: Yea, I have the two channels, Underground Garage on 21 and Outlaw Country on 60.

PV: I know you've been doing that awhile. How do you feel about satellite radio as a medium, and how it's been for music? Do you think it's helped reach people in a good way?

SVZ: Oh, it's been extremely important. That's where the archive of the greatest music that's ever been made is gonna live. You're not really hearing a lot of it on regular radio anymore. Regular radio has a very small playlist, a very narrow playlist, and the only place you're gonna hear most of the greatest music ever made is gonna be on the different satellite channels, that's just a fact. 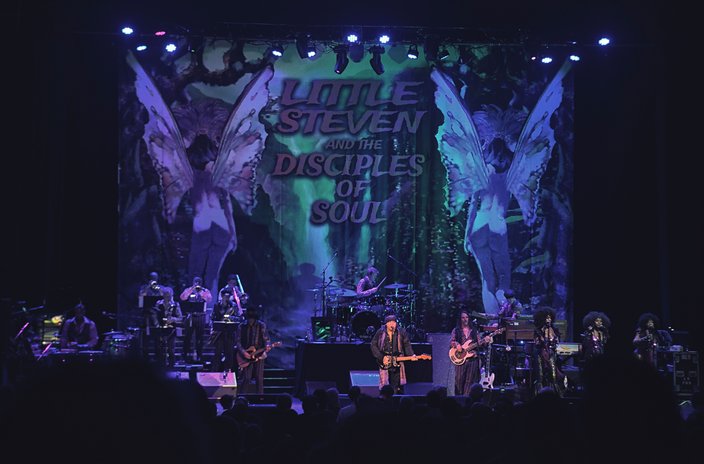 PV: I know you've been in Philadelphia a lot over the years. You go to the Wells Fargo Center and there's a banner up with the number of sellouts of the E Street Band in Philadelphia [56, as it currently stands.] Coming back to Philadelphia for the show, what does Philadelphia mean to you, and what are some of your memories of performing in the city in the past?

SVZ: Well, it's one of the first places I think that Bruce and the E Street Band broke through. It was only a few towns at first- Philadelphia and Cleveland and Boston. It was guys like Ed Sciaky, who was a DJ there on WMMR, I think back then. It was belief by just a few DJs, in a few cities, when the DJs actually had the freedom to play what they wanted to play, which no longer exists. But back then, in the early '70s, DJs could play what they wanted to. So we had a couple of believers, in a couple of towns, and it made a big difference.

PV: Is there anything in particular you like to do in Philadelphia?

SVZ: Somehow, a cheesesteak almost always finds its way backstage. Other than that, I've kind of passed the whole tourist thing a couple of decades ago. Philly's great, it's just one of the great cities, and it's like family to those of us i who are from New Jersey.

PV: So I've got to ask a "Sopranos" question. It was the 20th anniversary earlier this year, and there was a lot of commentary on reaching 20 years, there was a book called "The Sopranos Sessions." What are your reflections on the "Sopranos," and at the 20-year mark, how do you feel about having been a part of that show?

SVZ: I was very proud of it. It's regarded as one of the great TV shows of all time. It's also a history-making moment where HBO broke through as taking television to a whole other level. Up until "Sopranos," TV was always the inferior, younger brother of the movie business. Sopranos and HBO really changed that, and it was the beginning of superior adult entertainment really going to TV. And that's where it remains to this day.

There's a couple dozen movies a year made for adults, those are the ones you see at the Oscars, but most of the movie business now is for kids. Comic books, and video games, and that's where that went. So TV became the place to develop entertainment, and that began with HBO and "Sopranos." So very proud to be part of that, and it was a great gift to me from David Chase the creator to cast me in that role and have the faith in me that I could become a great actor and I really appreciated that, because I got a gift of a whole new craft.

I took that gift all the way to "Lillehammer," my other TV show I did, and I turned that one craft into five- co-writing that show and co-producing it, and I directed the final episode and did all the music. That all came from David Chase and "The Sopranos," giving me that opportunity. So it's a very important moment in my life.

PV: So, "Lillehammer"- that was the first original Netflix show, right?

PV: Did you have any inkling that [Netflix] would take off like it did?

SVZ: Not quite as big as it's gotten, because it certainly took over the world. When I got there it was just a couple people there, and there's no way to tell. When I did my first promotional tour, I had to explain to people what Netflix was. So it was nice seeing how that happened. I got a chance to have a front row seat to see how a company like that really explodes and becomes the big thing that they are.

PV: You were really involved in political activism back in the 1980s, especially with the anti-apartheid stuff. How do you feel about the role musicians are playing in political things now? Do you think people are doing it right, or could they be doing it differently?

SVZ: There's always gonna be musicians making comments on what's going on, for sure. I know Neil Young has been very very vocal and it's important that people are vocal and continue to fight the good fight.

Myself, I've kind of backed out of it at the moment. I feel my usefulness right now is to try and bring people together, because we are so divided, I just don't feel very useful in talking about partisan politics right now, because it just seems rather obvious what's going on, it didn't need the explanation that it needed in the '80s. My live show, there's no politics in it. I want to welcome Republicans, and Democrats, and independents, and everybody else to the show. Give them two hours of pure music, I want to transport them to another place, get them out of all of the divisiveness and fighting that's going on on a daily basis, and give everyone a two-hour break from it.

PV: Is it confirmed that the E Street Band is going back out on the road next year? [Bruce Springsteen appeared to tell an Italian newspaper just that in May.]

SVZ: Not confirmed, not yet. But we'll be talking about it. I'm ending my tour November 6, just in case Bruce wants to do something, I will be available for that.

Little Steven and the Disciples of Soul perform on Saturday, July 20, at the Keswick Theatre in Glenside. Tickets are available here.