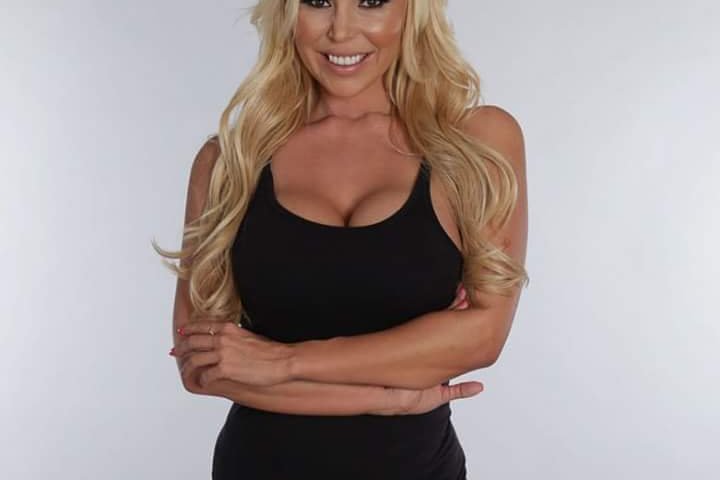 On Tuesday, a mass brawl broke out between students near the intersection of Midvale and Henry avenues in East Falls. Residents said they were threatened by teenagers before police arrived. The next day, chaos returned to the neighborhood.

The first indication that her neighborhood took a turn toward chaos on Tuesday afternoon came when Jennifer – driving her Kia along Henry Avenue on the edge of East Falls – saw a bunch of teenagers fighting in the street not far from a McDonald’s restaurant.

That fracas caused a moderate delay, but one that was somewhat forgettable. When she got to her home about a mile away, what she experienced will be etched in her memory for a long while.

Near McMichael Park, at Midvale and Henry avenues, she saw even more teens brawling. The melee spread across the street onto her property, near a white picket fence, to the point that she couldn’t reach her home safely.

“They were like a swarm of bees all following the fight into our driveway. I called [my boyfriend Jim at his office in Fairmount] and he got here in seven minutes, driving like a crazy person,” said the mother who had a child en route home from school at the time.

“Then, I called 911 because they were damaging our property,” continued Jennifer who, fearing repercussions, requested names be changed for the purposes of this story. “I got really worried when one of them picked up a concrete turtle [garden decoration] and looked like he was about to smash someone over the head with it. That could've killed someone.

"I got out of the car and yelled, ‘Put it the f--- down.’ Then, I saw one of them had taken an electric cord out of the trash can and looked like he was going to strangle someone with it. It was ridiculous. I couldn’t believe what was happening.” 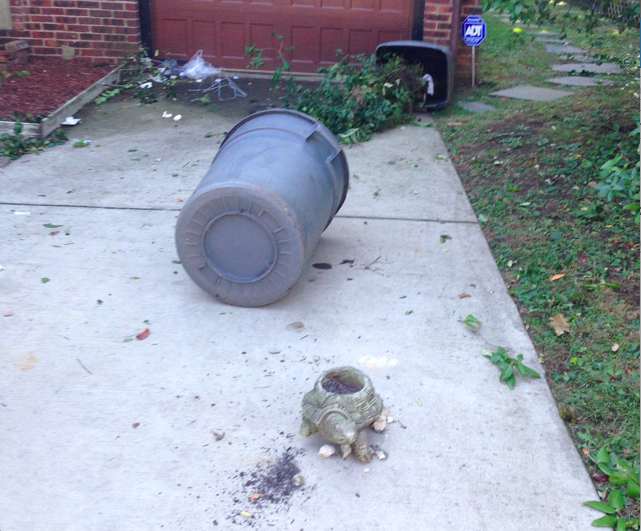 A brawl between students at McMichael Park in East Falls spilled across the street into the driveway of a home where residents say they were threatened by teenagers on Tuesday, October 18, 2016.

The concrete turtle – like other garden gear – would get smashed (not on someone’s head, but on the driveway itself). One teenage girl in her driveway threw her hands up in the air, refused to move and leaned back into her car when she tried to drive in.

That girl would later take pictures of the home and tell the couple that “my name is Alexis. Remember that. I’ll be back,” even though their only tie to the mayhem was the location of their property.

Police, administrators from the nearby Eastern University Academy Charter School (EUACS) and Jim would be on the scene shortly after that 2:45 p.m. call, restoring a limited sense of order. (The former was beckoned not by what 911 dispatchers heard via the Kia’s speakerphone, but because the home’s burglar alarm had been triggered.)

That sense of order was limited insofar as the fact that it took five people to hold back brawlers from attacking Jim, who wasn’t exactly happy about what he was witnessing.

If they thought it was over Tuesday, though, they’d be sorely mistaken.

At the same time Wednesday afternoon, McMichael Park again doubled as the Blue Horizon, and this time, adults were involved.

This time, the couple saw it all unfold. Neither left the house the next day out of fear for what would happen if they left it unguarded.

“This city,” said their neighbor Amanda (name also changed) while sitting on the front porch as a pack of police officers and school administrators settled Wednesday’s scene down on the other side of the white picket fence, “is in the toilet.”

The intersection of Henry and Midvale avenues is a high-traffic area with stops for several SEPTA routes on all four corners. After school lets out for the day, droves of students from a variety of schools either catch or transfer buses there.

The vast majority of those involved in back-to-back brawling days, though, have ties to EUACS which, located a few blocks away at the Falls Center, was “born (in 2009) from Eastern University’s social justice mission and commitment to the Philadelphia community.” (The school last made headlines when a teacher bought a copy of “Fifty Shades of Grey” for a student in 2013.)

He was speaking after Wednesday’s scene resulted in a car getting towed away; the adult driver allegedly drove some of the young participants to the scene to fight.

This was a problem, so Craighead spoke with PhillyVoice about two crazy days that left him heading over to the Falls Center to meet with the school’s dean.

He said he was told that the school has recently accepted students from other schools and a small group of them have “agitated issues between themselves and students who have been there since the beginning of their high school term.” That dynamic is seen as the root of the problem.

“We’ve gotten complaints from SEPTA drivers that this type of thing is happening more recently lately,” Craighead said. “As I observed on Tuesday, the majority of the children just wanted to get on the bus, but there were a few agitators there.”

He acknowledged that he and school administrators view the problem from different “philosophical foundations”: His is through a law-enforcement perspective while theirs is steeped in education.

“The staff knew who the agitators were. They called them by name. From their philosophical foundation, it was to pull them aside and say ‘don’t do this again.’ Explanation after explanation,” Craighead said. “I suggested a few things to the dean.”

Those suggestions included a staggered end-of-day schedule to alleviate a large influx of students that “overwhelm available resources” from both an administrator and transportation perspective, and steering those agitators into diversion programs like those provided by the city school district.

“The staff did a good job of identifying those involved and pulling the agitators out,” he said. Instead of getting a record, “put them with counselors and avail him or her of all the resources available to help adjust their behavior.

“If there are 100 kids and five agitators, pull them out and avail them of the resources. They have to understand there are definite consequences to their behavior: Suspension, expulsion. … They’re on notice and are moving forward to remove the negative element.” 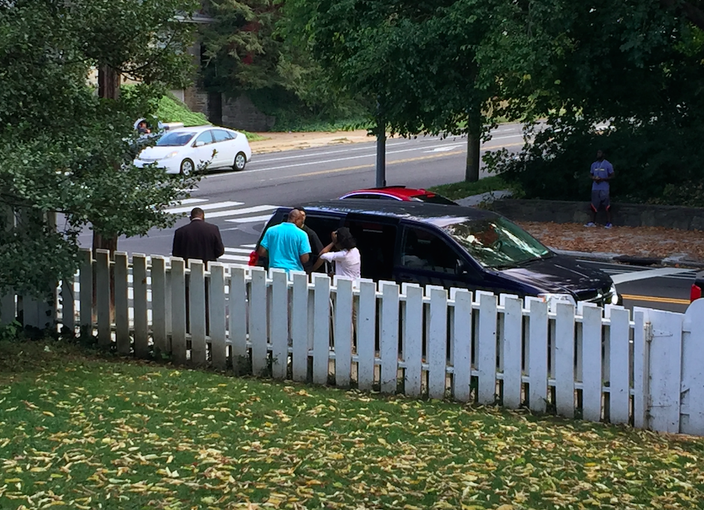 Administrators from Eastern University Academy Charter School speak to a student who was allegedly involved in back-to-back days of brawling at Midvale and Henry Avenues in East Falls.

He said the conversation was cordial, and that the dean was “agreeable” to the suggestions he made, including the fact that the school could be called to legal task should such incidents break out publicly, with employees looking on.

“He was there, so he knows I wasn’t embellishing. The one thing that’s extremely disappointing and disheartening to me is that there [are] adults involved,” he said. “These are children in their developmental years. It’s a real shame.”

Considering the property damage didn’t rise into the realm of expensive repairs, and the fact that no major injuries occurred, Craighead said the driveway brawlers weren’t criminally charged in connection with Tuesday’s melee.

"If there are 100 kids, and five agitators, pull them out and avail them of the resources. They have to understand there are definite consequences to their behavior." – Capt. Michael Craighead, 39th District, Philadelphia Police

“The damage didn’t rise to the level of arrestable,” he said. “The names were offered to the homeowner so they have that available” should they seek civil-case compensation.

Omar Barlow is the school's CEO and principal.

Responding to calls seeking comment, he noted that those involved were immediately suspended and provided this statement on Thursday morning:

Several of the students involved in the altercations on Tuesday and Wednesday of this week are recent transfers to Eastern University Academy Charter School. These students are unfamiliar with our school’s culture and have yet to fully adapt to life at EUACS.

Following the initial incident on Tuesday afternoon all students involved were immediately suspended. On Wednesday, however, the students chose to return to school property despite their suspensions and a second altercation occurred. We are now in the process of removing all involved students from the school.

In addition to removing the involved students, administration has taken measures to further ensure that this is an isolated incident both within our school and within our surrounding community. On Wednesday, school leaders met with police captain Michael Craighead of the 39th district to discuss disciplinary concerns. Leaders have also met with the East Falls Community Council as well as a number of members within the community to assure them that immediate action would be taken.

It is important to reiterate that this behavior is not the norm within the EUACS community. This was an isolated series of incidents within a specific group of individuals. All action that has been taken was done so to prevent similar occurrences in the future and to provide our students, their families and our surrounding community with a safe and secure educational environment.

It doesn't seem as if that'll help smooth things over with the couple whose driveway turned into a fight club, though.

Sitting outside their corner property, there was talk of leaving the city for the suburbs in short order. (“Try selling a house when this kind of thing happens outside,” Jennifer said.)

There was also talk of racial dynamics. (“One-hundred fifty black kids and a bunch of white cops getting into the middle of a brawl? That’s not a good scene in today’s political climate,” Amanda said of the delays in breaking up Tuesday’s fracas.)

Jim, who filmed the cell-phone video of Wednesday’s fight and aftermath included in this post, said that the dean of the school stopped by and apologized for what had occurred. (This happened a day after other adults at the scene declined to name the school from which the students came.)

He lauded the police’s Wednesday response, what with blaring sirens approaching within 15 seconds of when he noticed the fight break out.

Though he seemed relieved about the reaction on Wednesday, it was a minor positive in a world of negatives for his girlfriend.

“The whole thing is so awful,” Jennifer said. “What a pathetic Philadelphia scene.”