Swimming season off to a tragic start at Jersey Shore 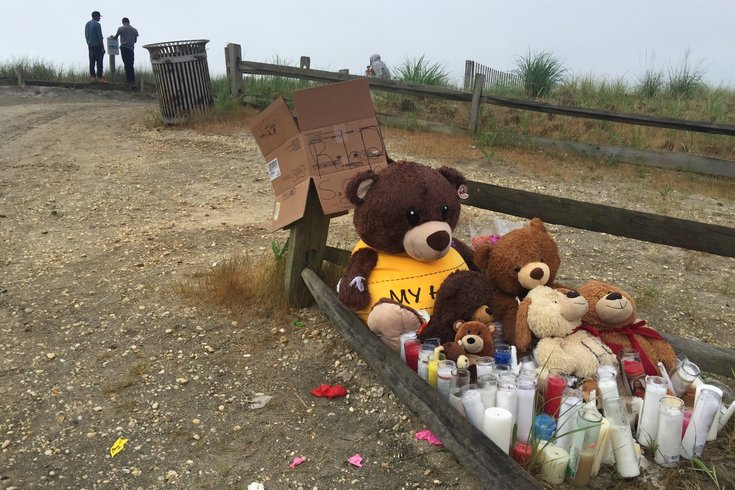 A memorial had been set up as of Saturday morning for two teenagers on the Atlantic City beach where they were pulled out to sea Thursday night. Rescue crews continue to search for the teens, who are presumed dead.

As swimming season returns to New Jersey's shores, some resort towns are reeling after several drownings or near-drownings in state waters.

Authorities say three young swimmers have fatally drowned along the shore since Sunday, matching last year's total for rip current fatalities in New Jersey, and another swimmer remained on life support as of Friday.

A search continues for two teenagers presumed dead after they were swept out to sea Thursday night in Atlantic City. In Belmar, a 13-year-old girl died and her 12-year-old cousin remains in critical condition after both girls were pulled out of the ocean 30 minutes apart Thursday night, according to NJ.com.

In Atlantic City, emergency workers resumed the search for the teenage boy and teenage girl believed to have drowned there. Atlantic City Beach Patrol Chief Steve Downey told the Press of Atlantic City late Thursday that the operation is now a "recovery effort."

On Friday morning, an Atlantic City police spokesman identified the teens as Kaliy-ah Hand, 16, of Atlantic City, and Ramon Quinn, 15, of Pleasantville.

After lifeguards left the beach, they went for a swim with friends at the beach at Martin Luther King Boulevard. The group returned to shore, but Hand and Quinn were pulled into the ocean, according to the Press.

Witnesses said Quinn tried to help Hand, but he was pulled further into the ocean toward the jetty. Both were reportedly pulled further out to sea by the current after a struggle.

“He risked his life trying to save a young girl,” Quinn’s stepfather, Will Black, of Atlantic City, told the Press. "The current was too strong.”

New Jersey's recent swimming tragedies haven't been limited to the ocean, either.

A 23-year-old man from Pleasantville, Lenyn Mercedes-Payamps, reportedly drowned in a quarry in Hamilton Township Monday night after a friend, seeing Mercedes-Payamps starting to falter in the water, tried to rescue him.

A day earlier, a 20-year-old Patterson man drowned in a pond at Wayayanda State Park, where he had been swimming Sunday night. He began having difficulty in the water, slipped under the surface and never reappeared, according to NJ.com. His body was found Monday morning.

Last year, the state's three drowning deaths – two in Long Beach Island and one in North Wildwood – were all blamed on rip currents.